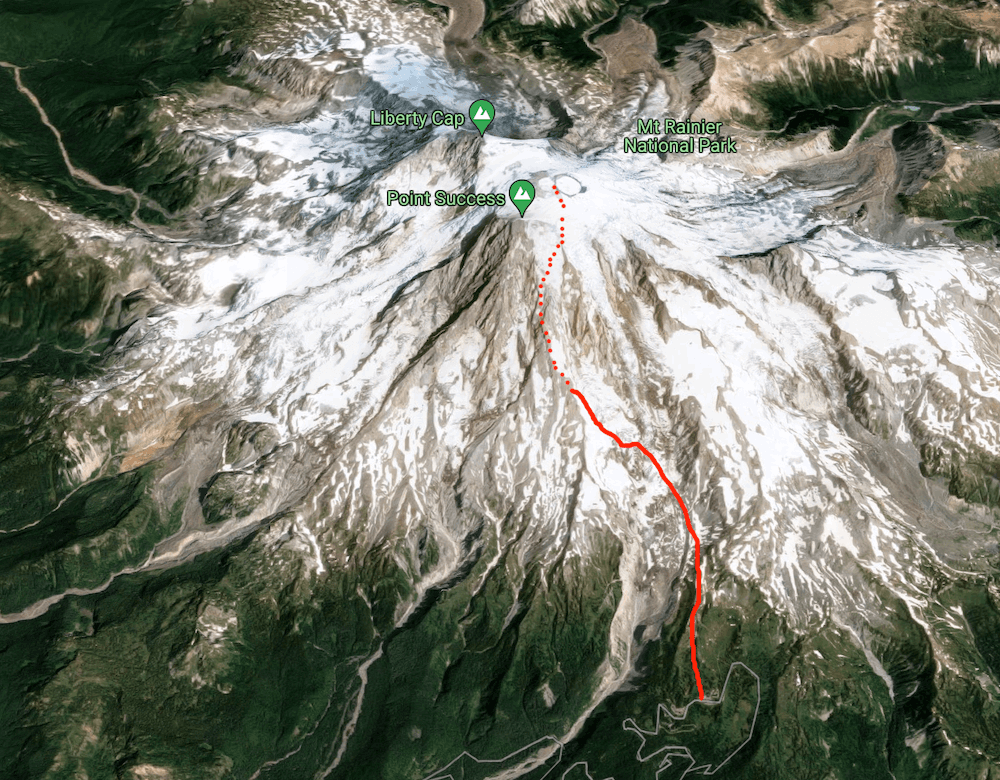 Tacoma is the most volcano volcano in the United States. Its huge bulk of glaciers tower over Seattle (and Portland). Tacoma, like Kulshan, creates its own weather systems because of the short distance between the mountain and the warm ocean air and the dramatic change in elevation as that air rises up the mountain sides. Tacoma is one of the rare mountains in the world which has experienced glacial growth in the last century, although that has reversed in the last thirty years. The mountain itself is a spectacular place, a maze of volcanic pinnacles, icefalls, and huge glacial masses everywhere you look. There are no easy ways to the summit and the majority of attempts to summit the mountain end in failure, most often due to the unpredictable and sudden transitions in weather. Climbing Tacoma by the Kautz Glacier, our intended route, requires gaining about +9,400’ of elevation over 5.5 miles.

So I did a bad thing in May and scheduled five big events back-to-back, first was the quick trip to Kulshan (Baker), then we “worked” remotely from Hawaii for a week, followed by the WRF symposium which I left early to catch a flight to Portugal for the IBL annual meeting, and then finally I flew straight back to Seattle to jump on Rainier. In theory this should have all worked fine, but my flight from Portugal got canceled and then my rebooked flight got canceled and finally when I got back to the US through Washington a day late thunderstorms delayed us by two hours on the runway. So basically, I got off the plane jet-lagged and feeling pretty awful, slept a few hours, packed my bag, and started hiking up. Bad way to start a trip! Fortunately Danny and Adam were ready to go and we got out at a reasonable time to start hiking on day one. 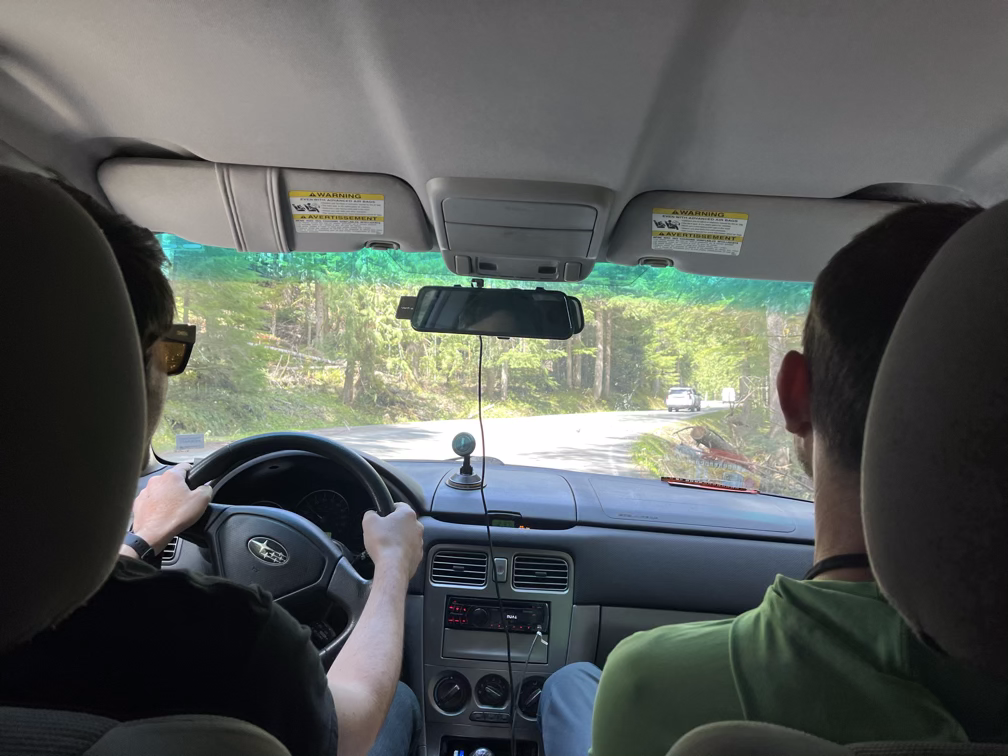 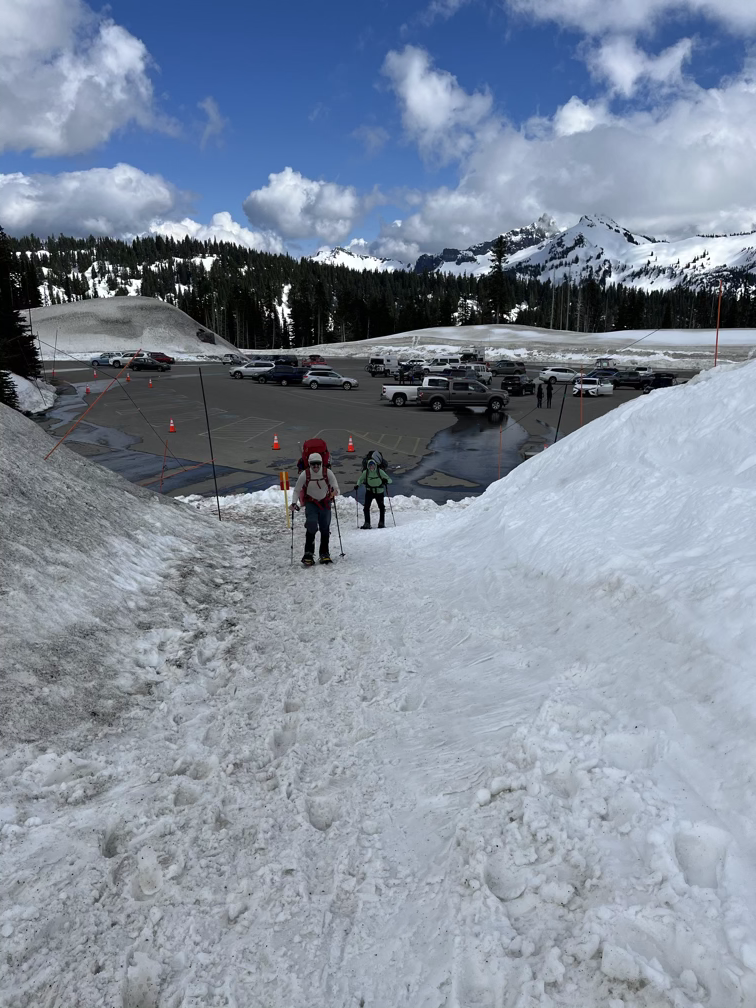 Tacoma is a much more serious ascent than any of the other Volcanoes I’ve done on this blog. The glaciers are much more crevassed and the weather is very unpredictable, which add up to a serious mountaineering trip no matter what route you take. Unfortunately, May this year has been full-on Winter conditions with high winds and significant precipitation. Unlike other mountains, Rainier has a complicated permit lottery, so we didn’t have any way to shift our trip – so up we went! 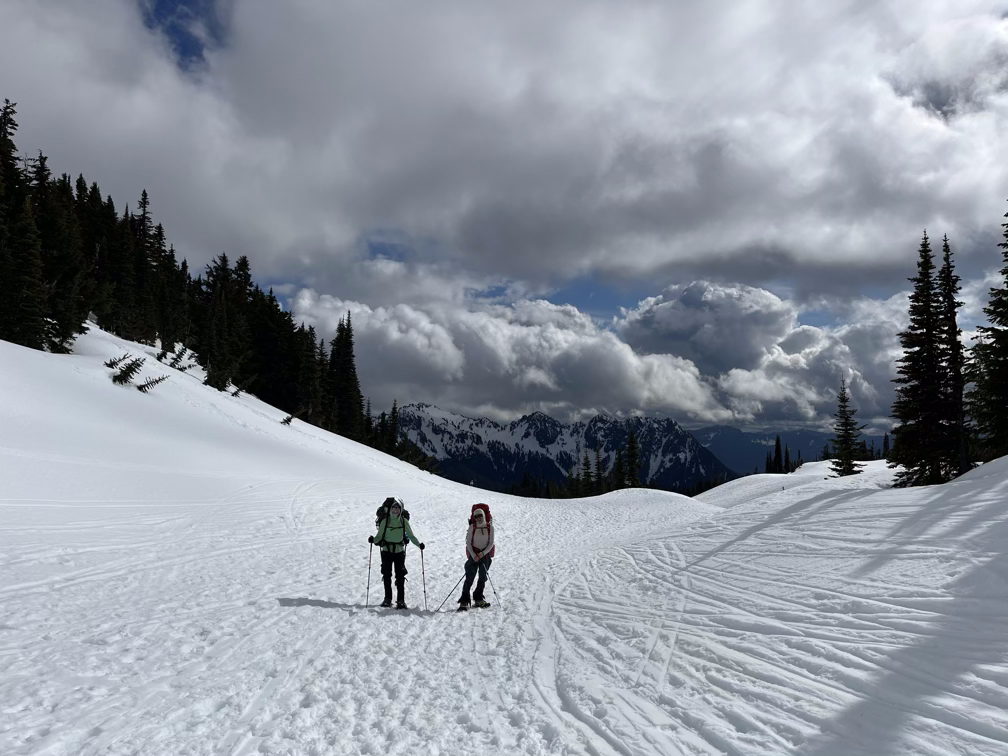 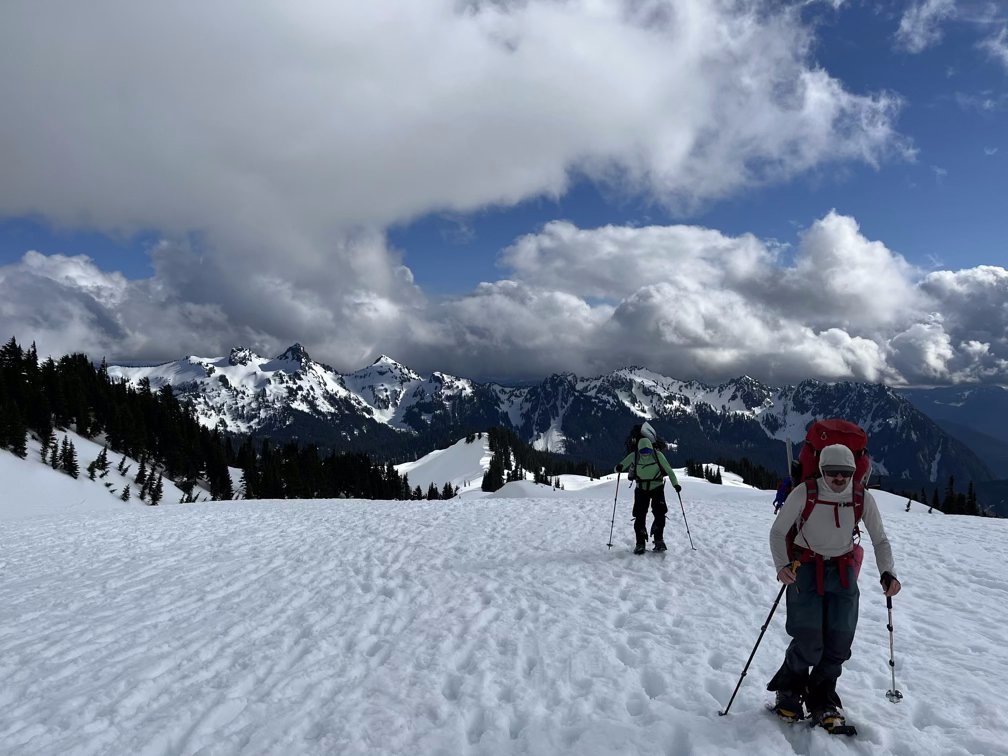 All of the routes on the Southeast start can be started from Paradise, which is a nice cozy parking area with views up the whole mountain, except not on our day because high winds were creating cloud cover above about 9,000’. From Paradise we hiked up mushy snowfields with our snowshoes and skis making our way to the eastern edge of the Nisqually glacier. 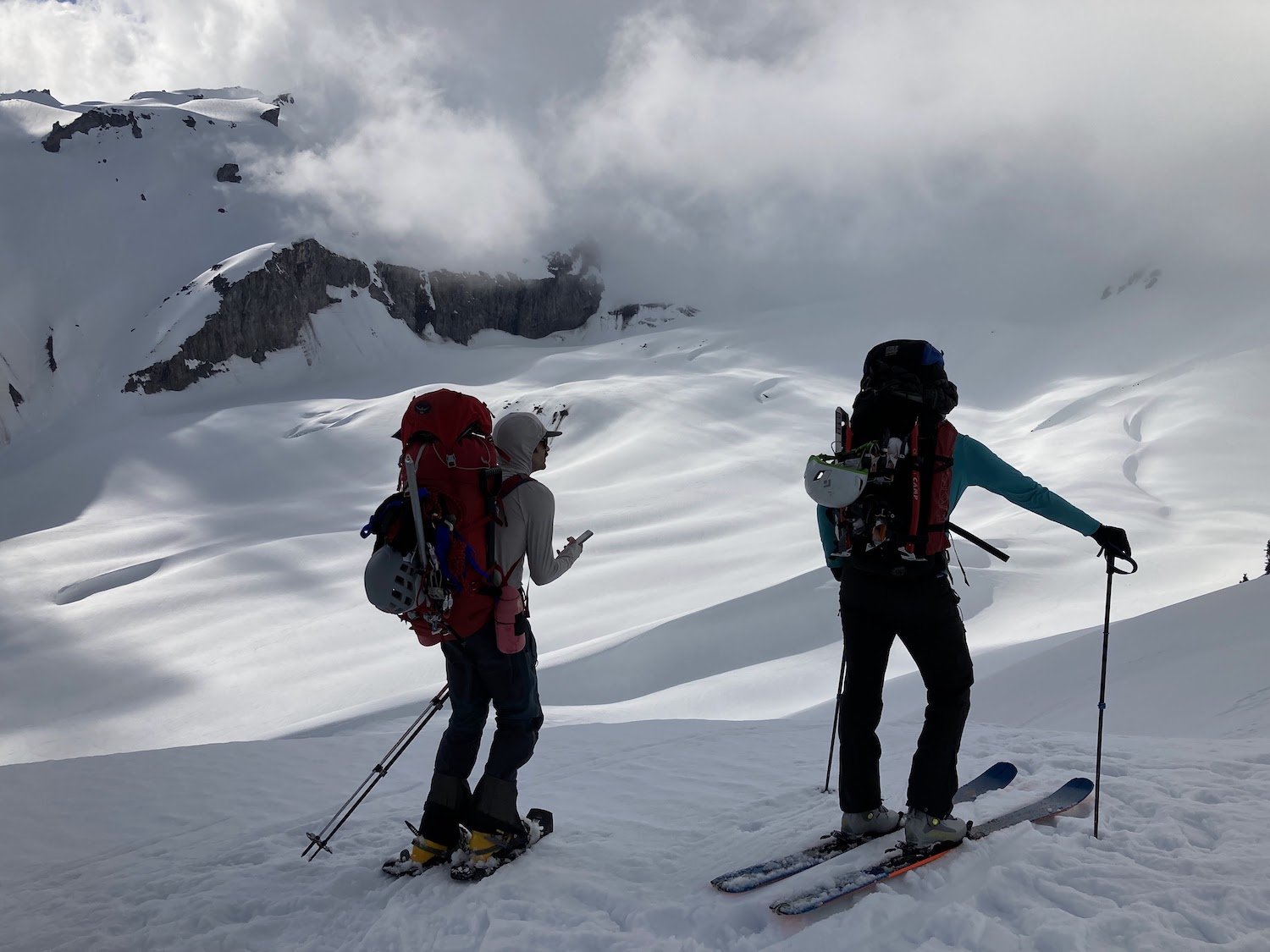 In the last ice age the Nisqually used to run several miles farther than where it ends today and that left huge moraines on each flank, which we had to drop down to reach the glacier proper. As soon as we hit the glacier and roped up the cloud level dropped and we were in a whiteout. 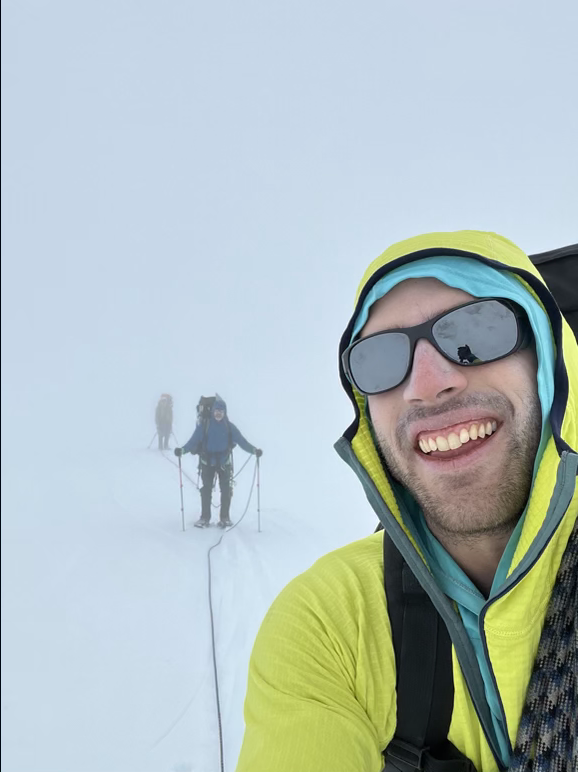 We started our hike late afternoon around 5pm, and at about 8pm or so we had crossed the Nisqually and started heading uphill again. We found a great campsite nestled among the icefalls in a safe place and decided to stop there and relax. The first day on a big mountaineering trip is always tough because the packs are SO heavy, and since this was Adam’s first trip ever!!! Go Adam!!! this was a good choice because after that first hike we all sorted out some of our gear and left a few things behind (including the snowshoes, which we wouldn’t need the next morning after the overnight freeze). 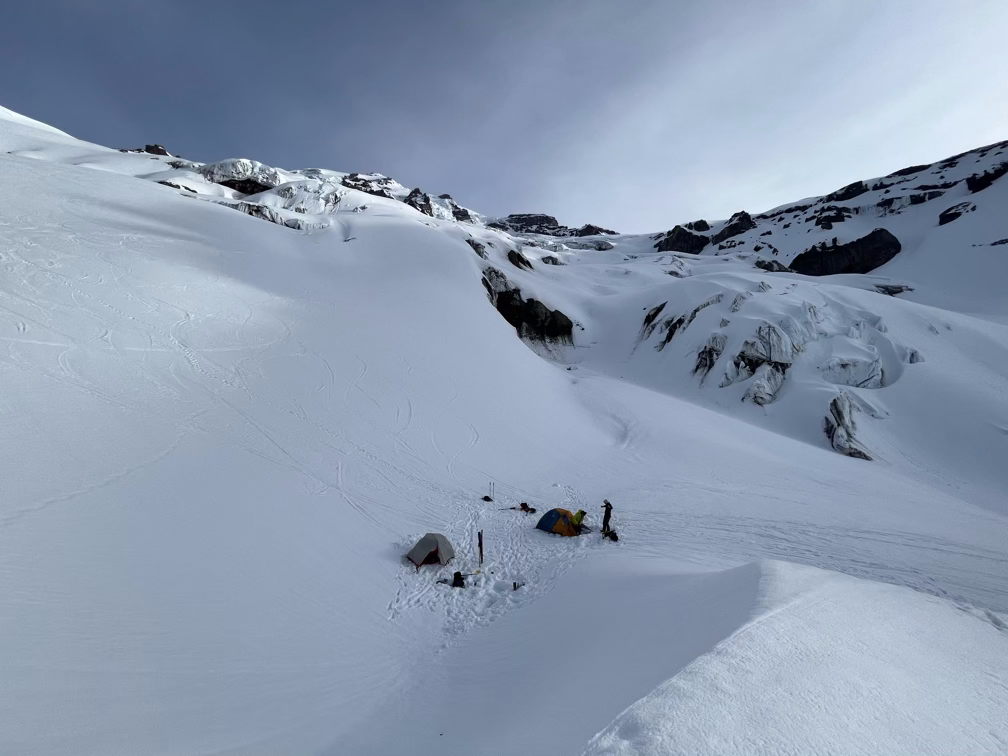 Day 2: Up to the Upper Windzone

We woke up at the quite reasonable hour of 7am to the sun hitting our campsite and took our time enjoying breakfast ramen and breaking camp. Around nine we got moving up to the next camp, a short hike of about two miles and a bit more than +2,000'. 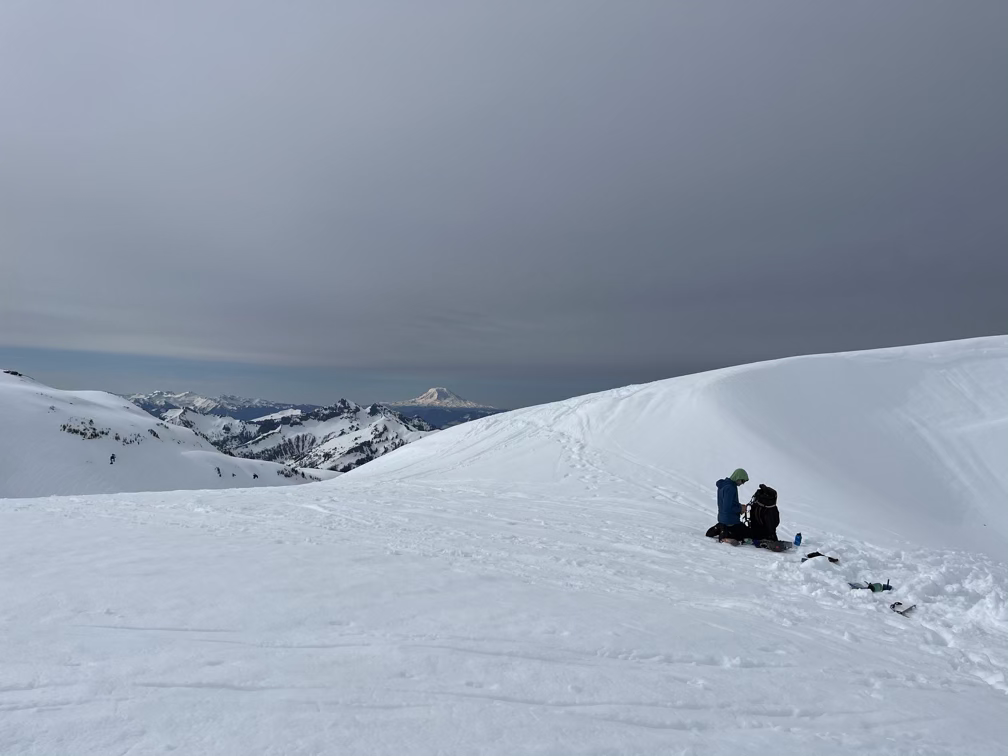 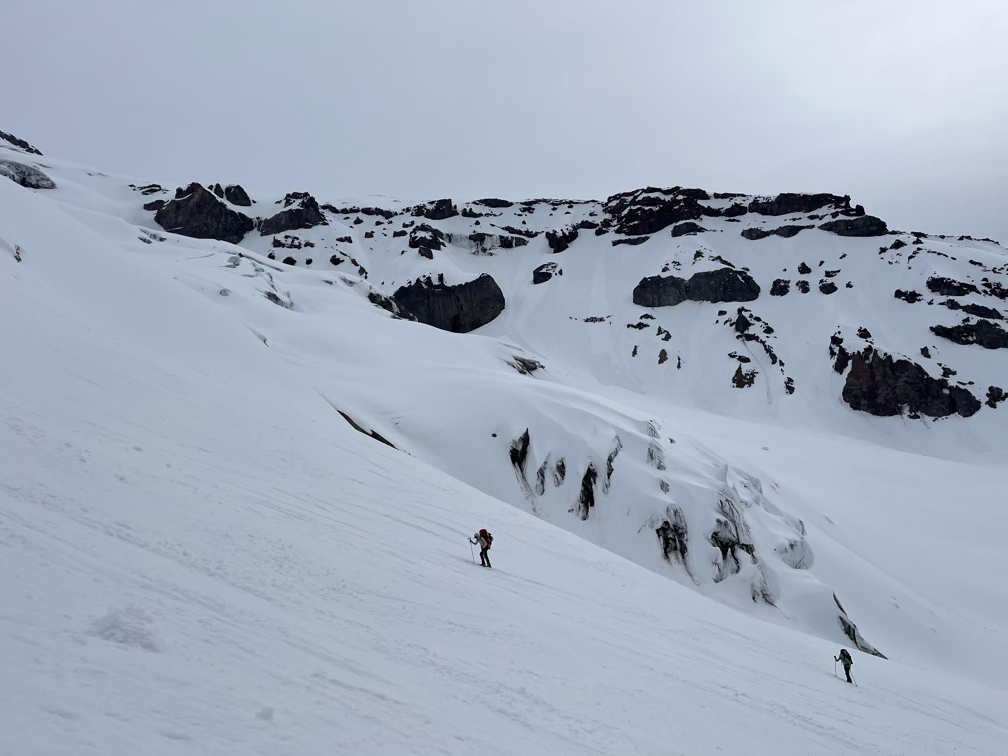 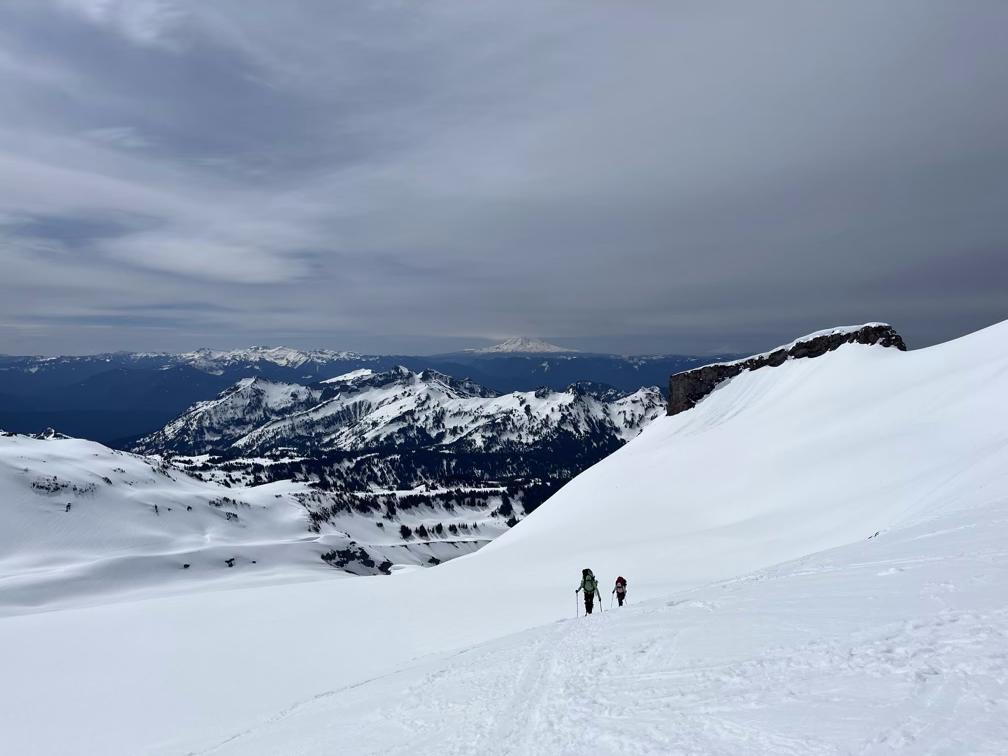 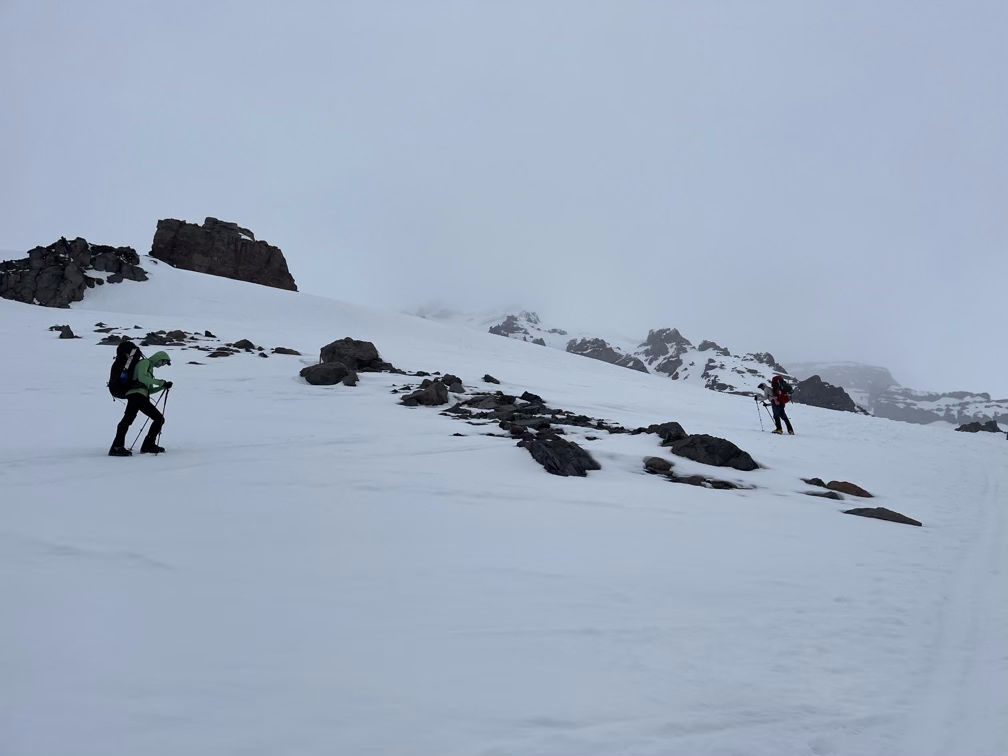 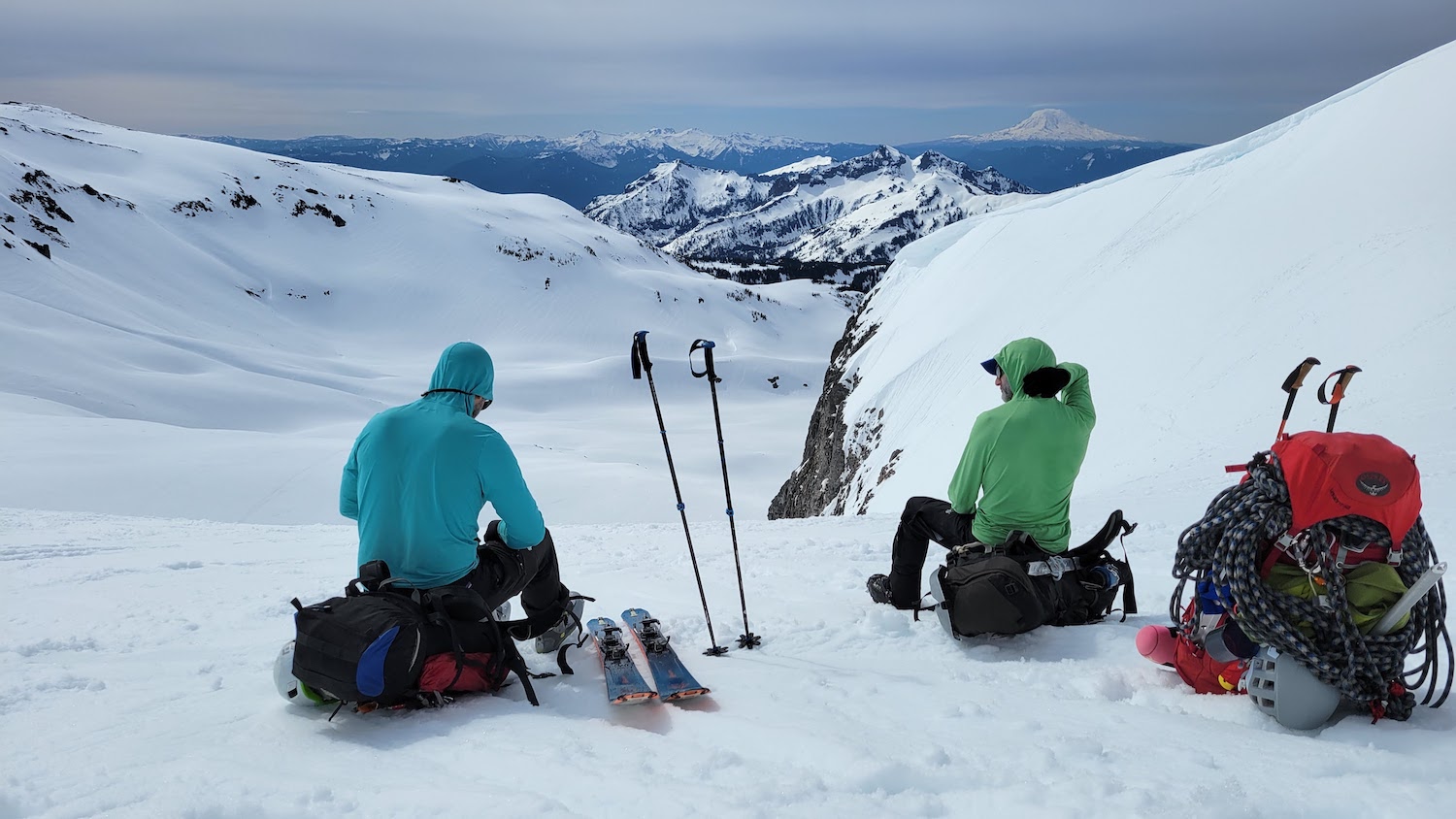 On the hike up we undoubtedly crossed many crevasses that we couldn’t see, but we found one small open crevasse which was very deep which we are counting as Adam’s first “official” crevasse crossing! Happy birthday! 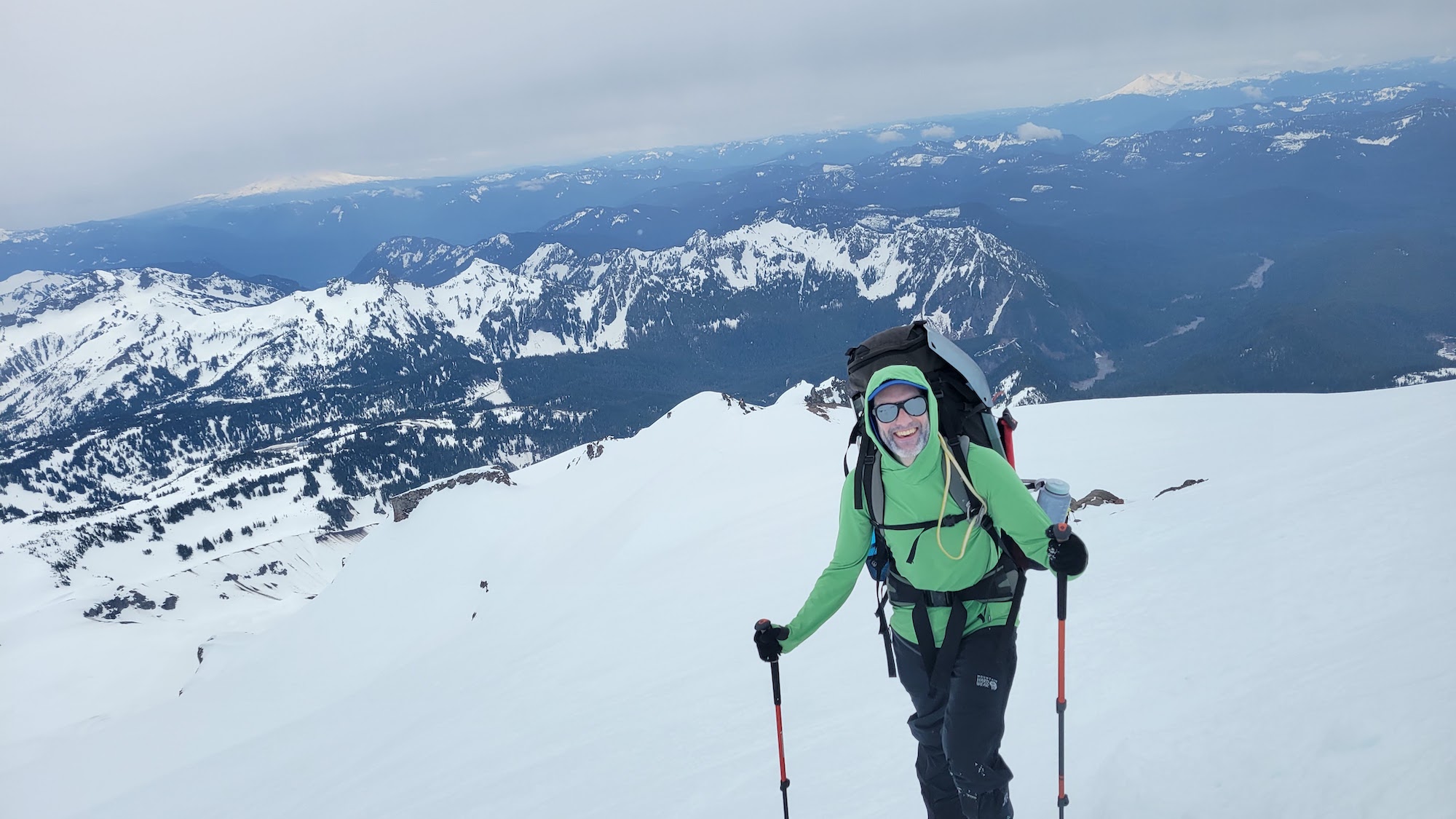 A few minutes after that we arrived at our high camp at the Upper Castle. We got some information from some skiers there and a guided group about the different route options and then we set up our camp. Occasionally the clouds cleared enough that we got some beautiful views in the distance, but mostly we were socked in by light snow and pretty high winds. 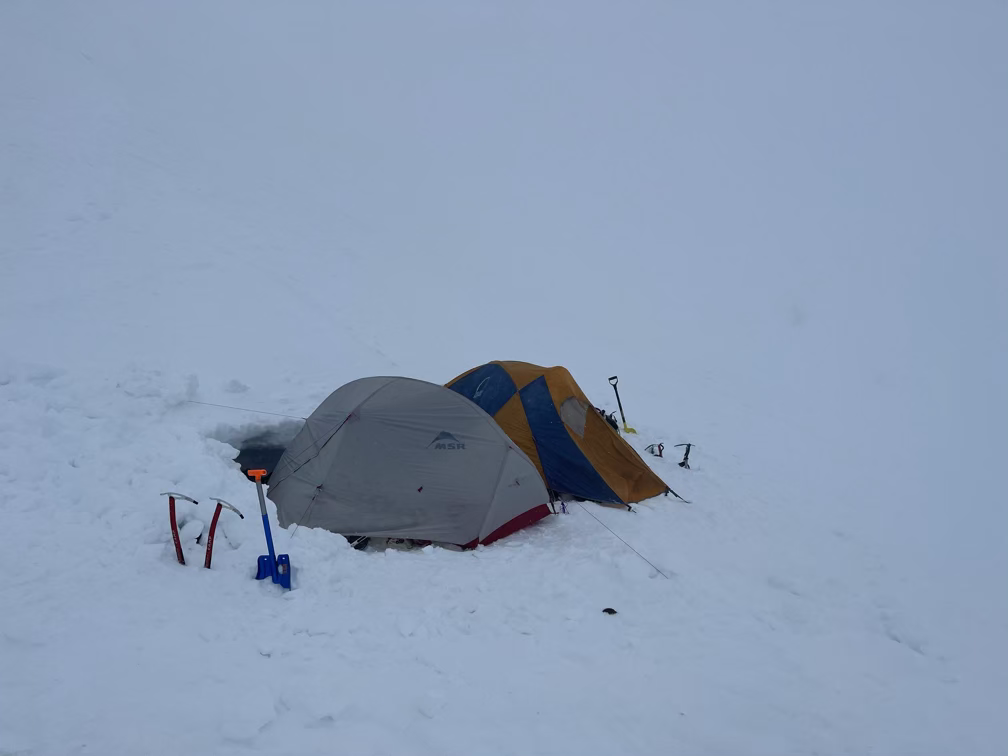 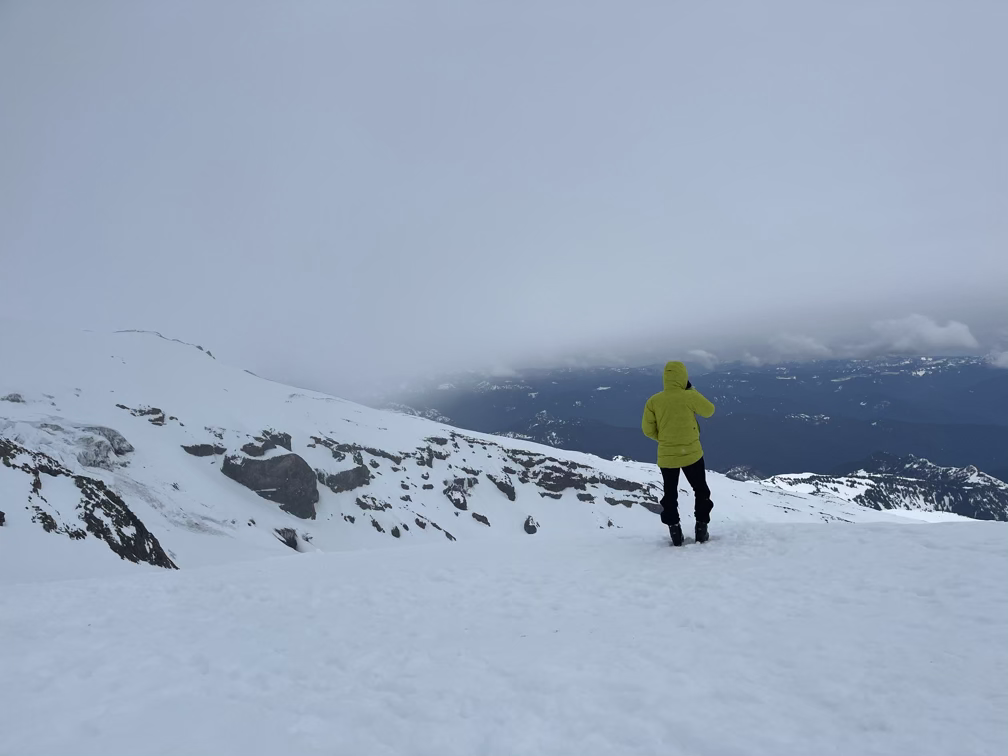 After some discussion we decided to nix the option of going up the Kautz. The guided party told us that there was some serious avalanche risk getting onto the Kautz glacier itself. We had gone into this trip with a backup option of going up the Fuhrer Finger, which is a more moderate snow route that a lot of people ski and that is less exposed to avalanche danger. So we decided to go with that plan with a wakeup time of about 3am. We took a break in our tents to relax for the early afternoon and then we got up to melt water from snow and make our dinner.

Unfortunately, the weather conditions deteriorated dramatically after dinner. While we were melting water the weather switched from lightly snowing to sleeting as the freezing level dropped. At the samet time the wind picked up from a light 10-15 mph to 20-25 mph. Throughout dinner probably an inch or two of sleet came down and then quite suddenly the precipitation turned to rain. Rain or wind alone are generally not too big of a deal, you can get wet and still climb a mountain and you can sit around in the wind and climb a mountain, but getting wet and cold from high winds can be a big concern. We were particularly worried that the wind would continue getting stronger, so we spent about an hour building some walls around our tents to protect from the wind.

At this point we were all getting pretty pessimistic about the climb itself, it was become clear that the weather on the upper mountain was going to be miserable. The forecast said 60 mph winds on the summit for the next day, which is definitely really dangerous wind chill conditions. Going up there with damp clothing would be a recipe for hypothermia and frostbite.

And then, things went to total shit. Apparently at Camp Muir, the big campground where the majority of climbers stay on their way up the “standard” route recorded a 91 mph gust between 11pm and midnight with sustained winds in the 50-60 range. On our end, we don’t really know how strong the gusts were but they were strong enough that they ripped the guy lines (cords we use to hold down tents in high winds) from my tent and destroyed the tent fabric itself. Sometime around midnight I yelled for help because the tent was falling apart and I was having to hold it up by hand. Danny rushed out to help me take the tent down and we decided I would spend the night in a little snow cave someone had dug on the side of our campsite. We dug it out a bit further to make it comfortable to sleep in and I snuggled in with my now fairly wet sleeping bag.

Around 6am we all got up as the sun started to come up. As usual, in our total whiteout we couldn’t really know that for sure but by then I was tired of shivering in my wet sleeping bag, wet pants, wet base layer, wet sweater, and wet puffy jacket, so it was a good time to get moving in any case. Danny came out first and gave me some snacks, which was enough calories to get out of my snow cave and start packing up. 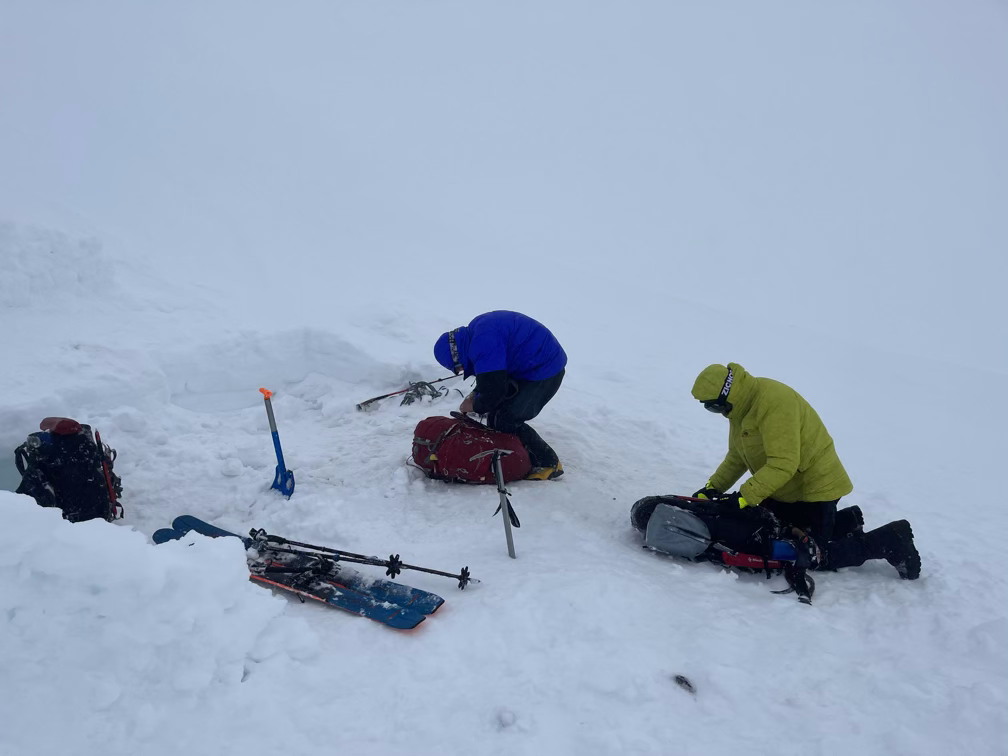 The wind was still intense and we were all pretty soaked through, so the packing process took a long time, but by 7am or so we had everything locked down in our packs. We skipped breakfast and melting water in favor of getting down and out of the worst of the wind. This definitely took its toll as we meandered down the upper mountain in a bit of a daze, but the conditions felt pretty safe overall and by the time we got down below the wind and took a snack break we all felt like we would make it out to the car without any issues. 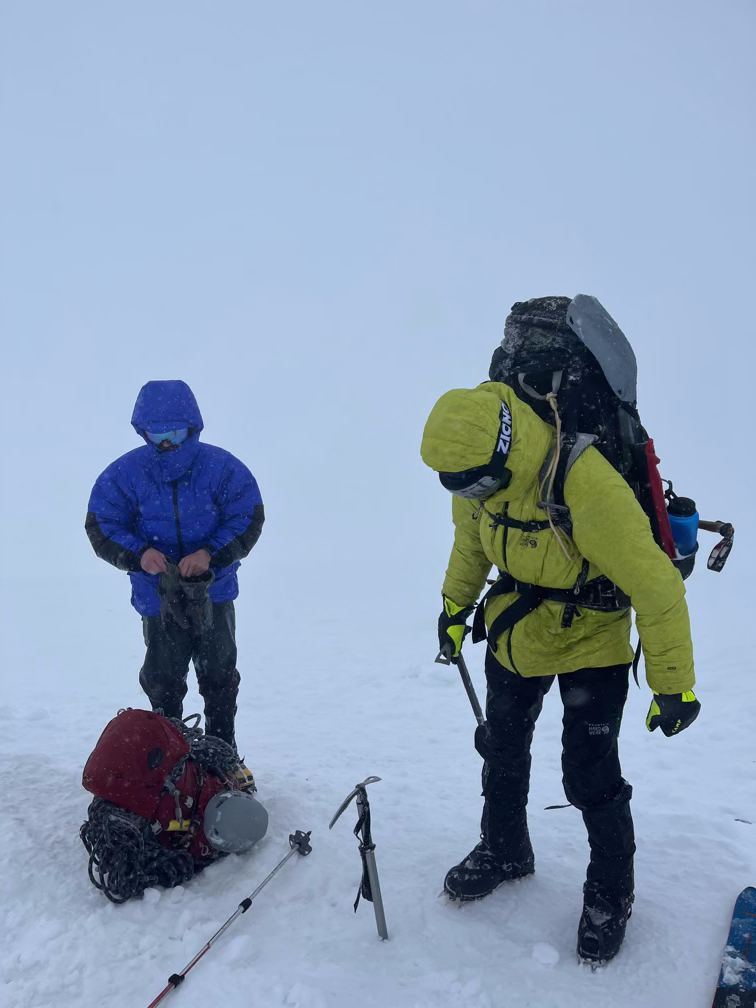 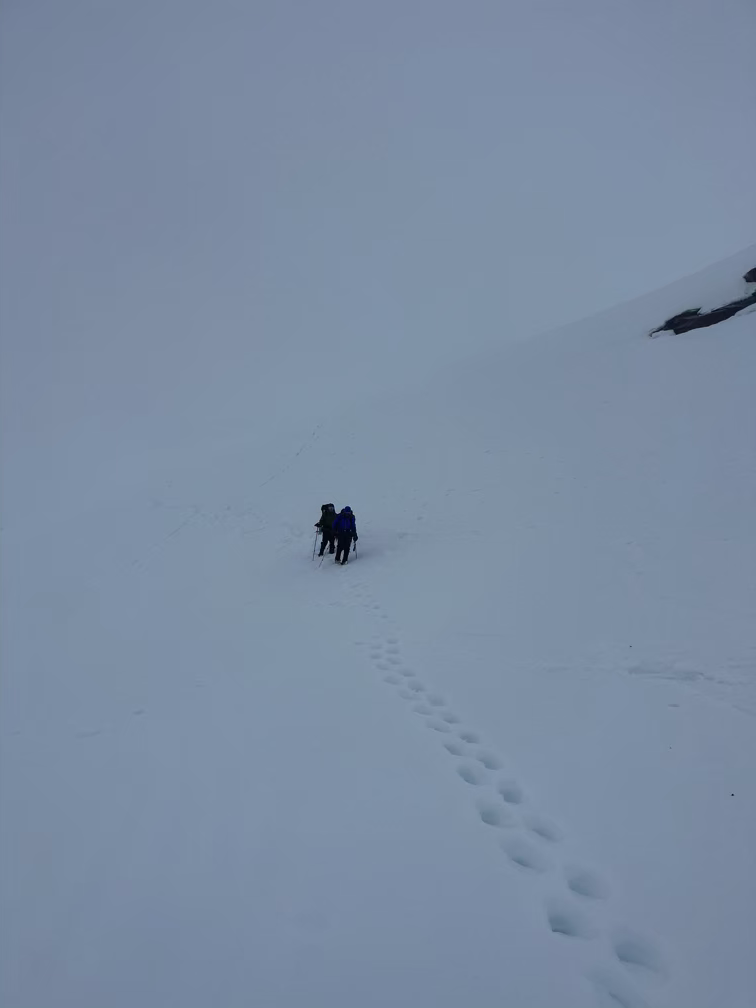 Once we got back down to our first camp we finally dropped below the clouds and the wind and the mountain gave us some beautiful moments. After a short trek back across the Nisqually with all of our stashed gear we drove home for some well-deserved relaxation. Not the trip we had envisioned, but being out on Tacoma is a beautiful experience no matter how high up you get on the mountain. 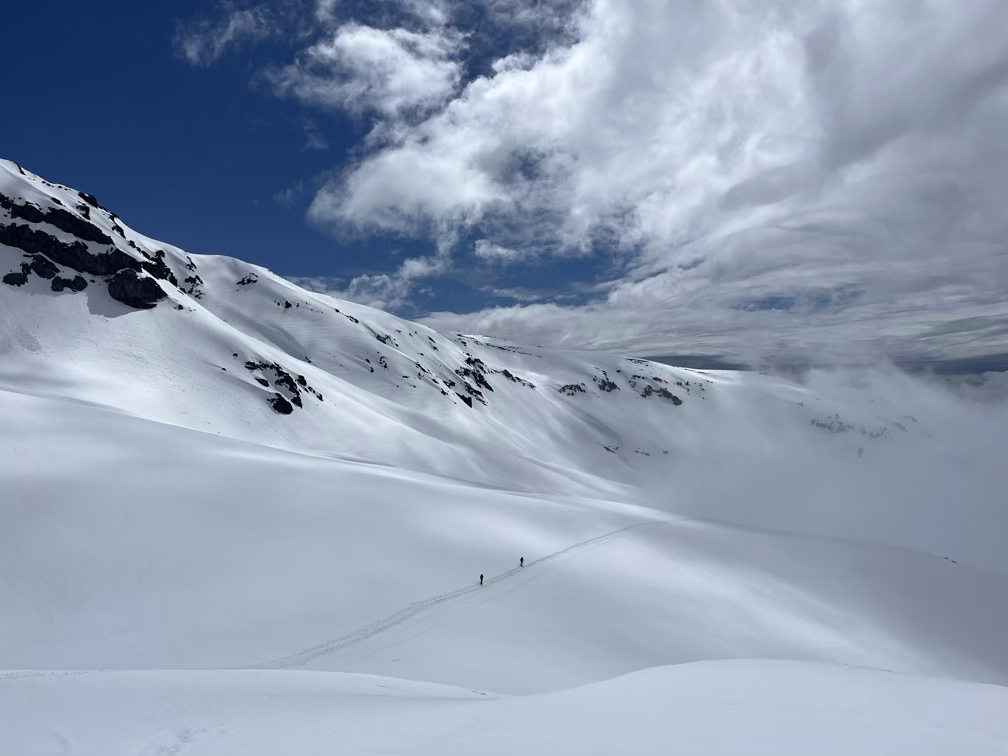