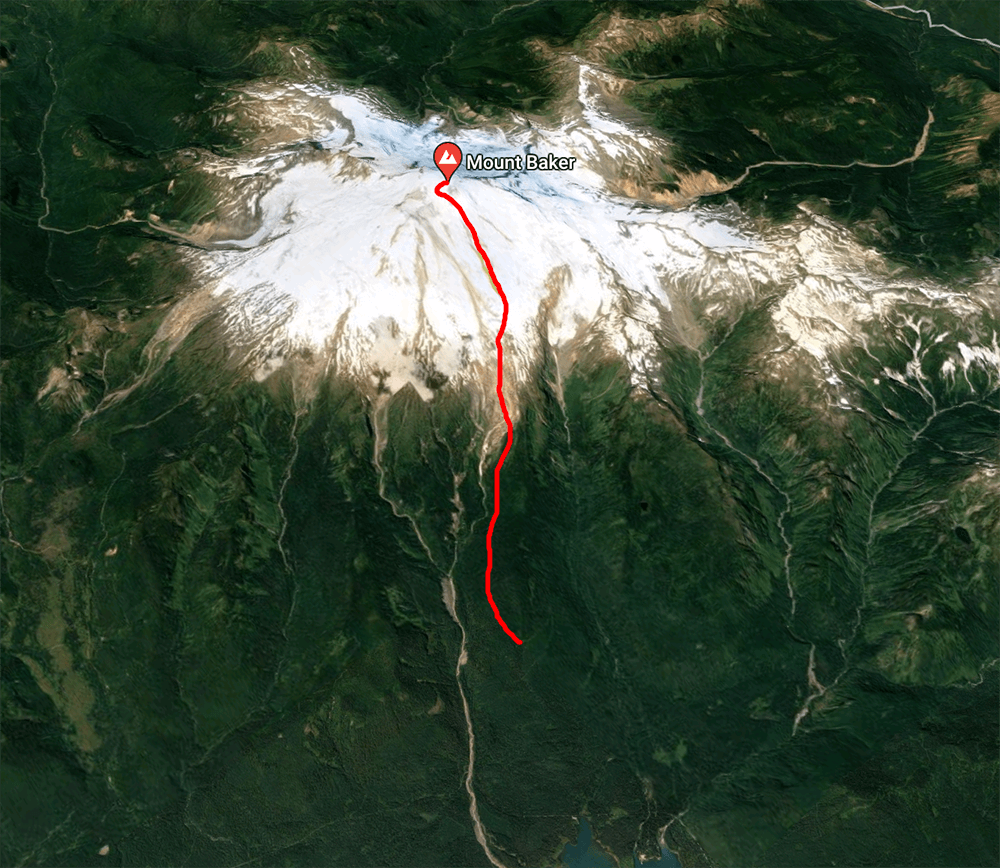 Kulshan stands out amongst the Cascade volcanoes because of its very short distance to the San Juan islands and then the Pacific ocean. The short distance and the lack of large mountains between the ocean and the peak create consistent deep wet snow, which accumulates on the upper elevations into massive glaciers. Kulshan hosts more glacial ice in its thirteen glaciers than all of the other cascade volcanoes (except Tahoma) combined! It also has one of the largest and most active summit craters, with hundreds of fumaroles venting sulfur. Climbing from the southeast side up the Boulder glacier is a +8,000 ft ascent over 6.5 miles. The trailhead road being snowed out added 400 feet and 1.2 miles.

Tons and tons of snow also got a cold

The last three weeks in the Pacific Northwest have been super super wet, with a lot of dense heavy snow dumping on the mountains. With the high spring temperatures that made for pretty bad avalanche conditions. On top of that, I got a cold after getting home and then promptly got a cough for a few weeks. The last week of April I finally started feeling better and with just a bit of cough lingering decided I should take a shot at another volcano! Unfortunately, everybody else had all sorts of non-volcano plans so I picked a route where it wouldn’t be too hard to back off if I felt like the danger was too high and headed out Saturday night to sleep at the trailhead. 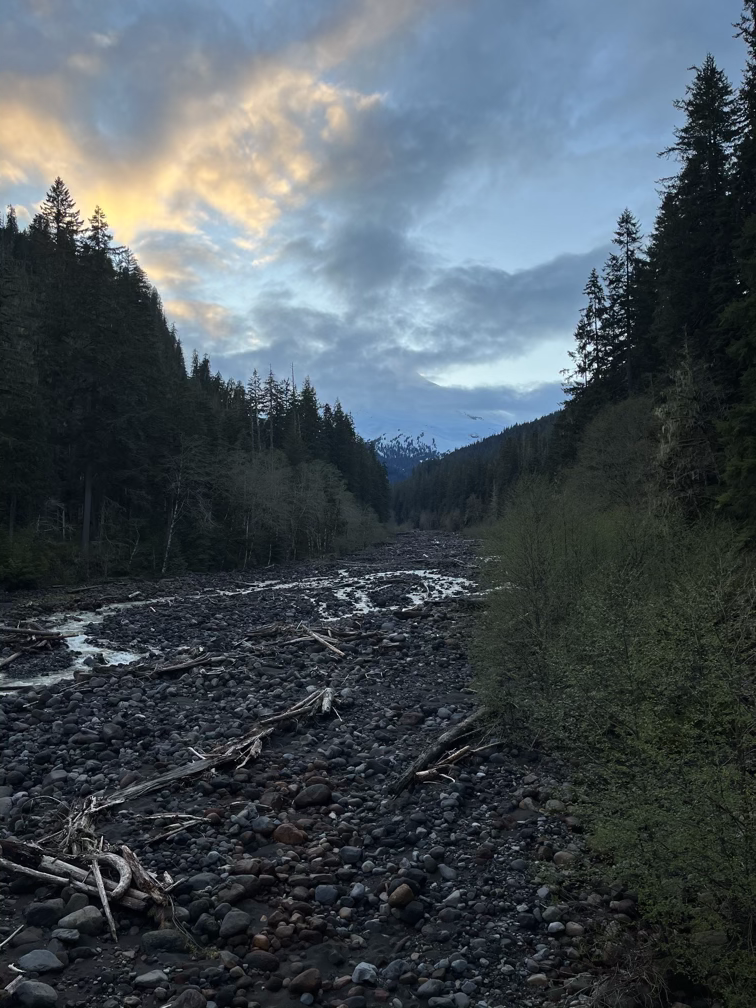 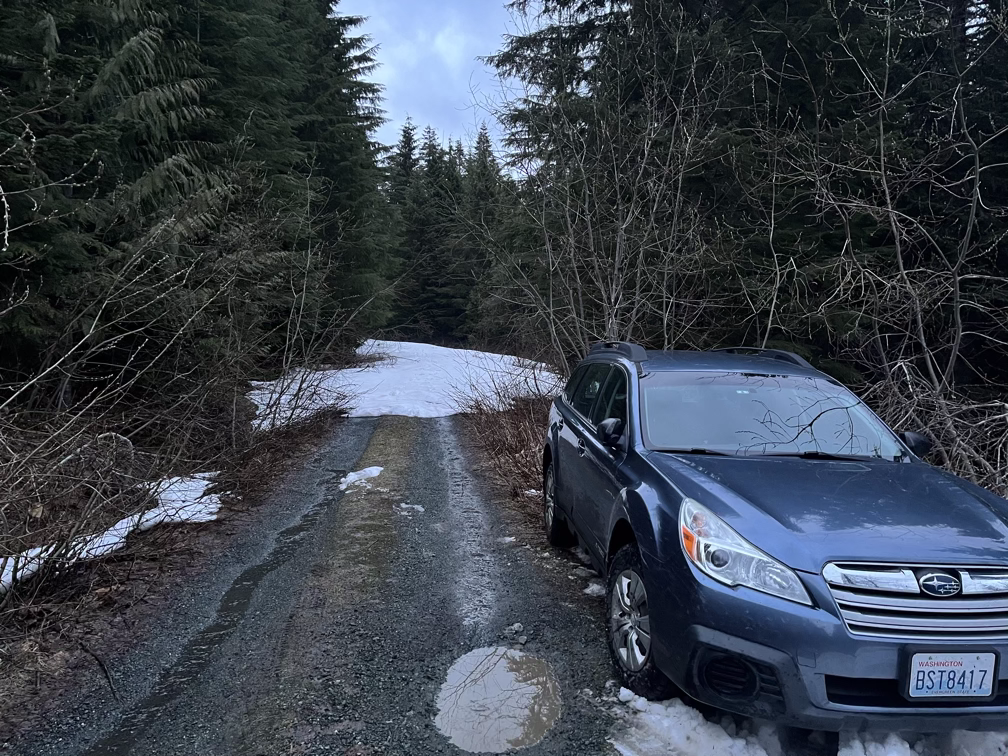 The trail was snowed in a little more than a mile from the real trailhead, adding some distance and elevation to the route. With the combination of being by myself, still being a little sick, and the uncertainty of conditions on the upper mountain I was planning to just go up until I didn’t feel good anymore and then turn around so adding a little distance wasn’t a big deal. Still, I set the alarm for 4:00am to give myself plenty of time.

4:00am turned into 4:30am but I did eventually roll out of my sleeping bag and make some ramen. The ski up the road turned out to be almost entirely snow-covered and totally empty of tracks. Except for these bear tracks I found! 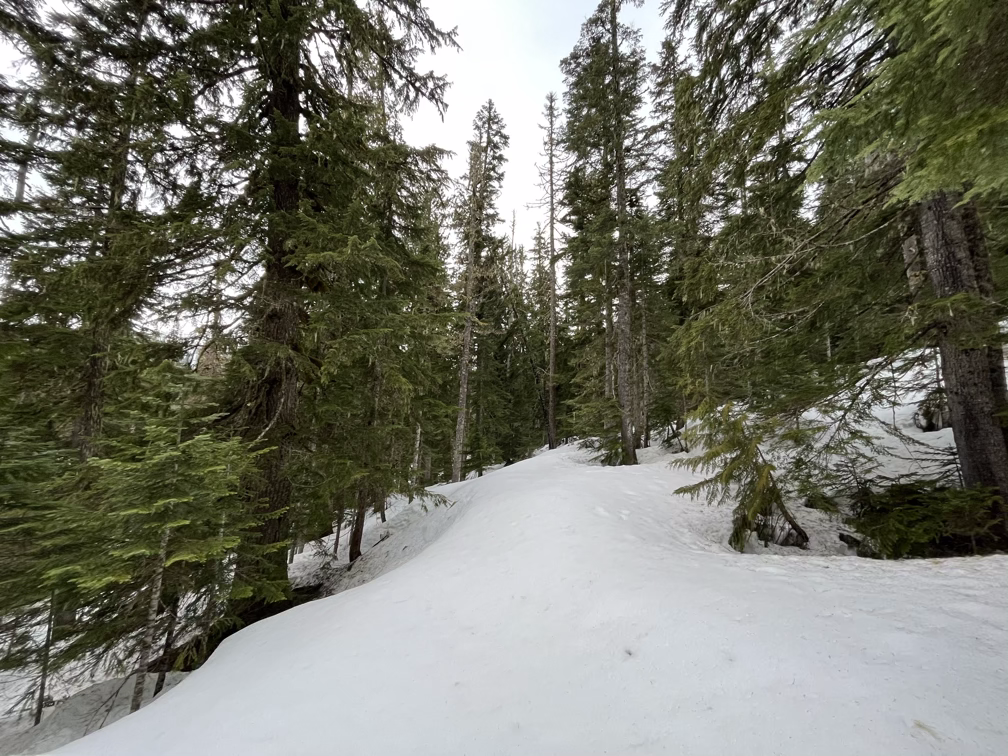 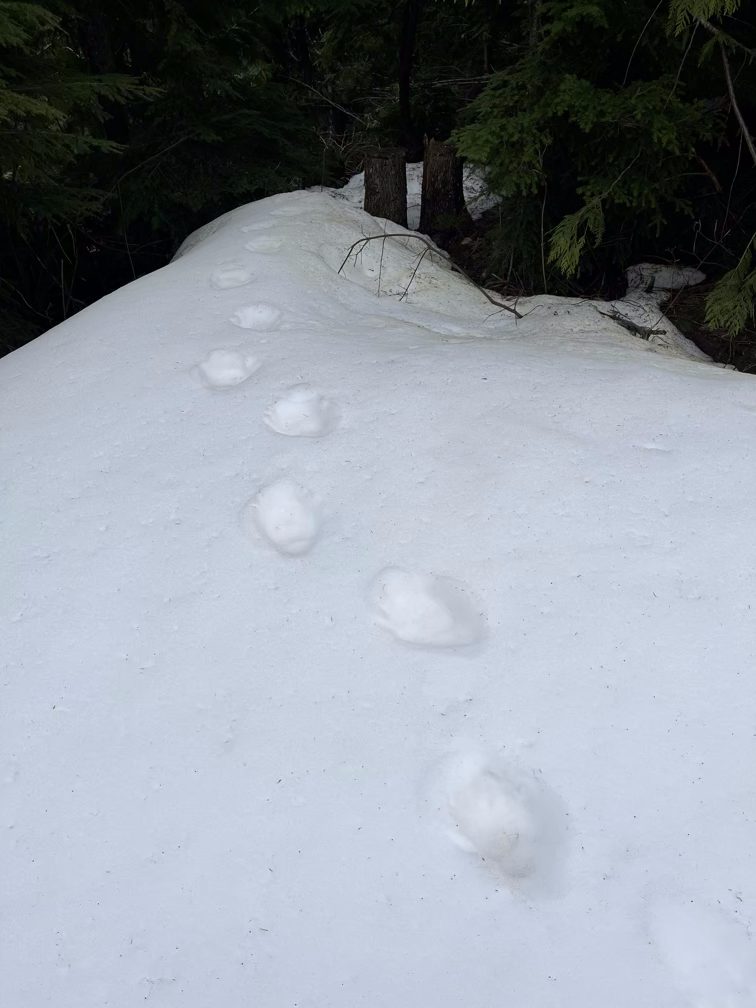 The boulder glacier trail is totally unmaintained, except for the occasional helpful hiker who brings along a saw. In the lower section of the trail which goes through the woods this makes for a lot of wandering around large trees and over blowdown. Because of the new snow and the warm temperatures there was a lot of snow on the ground but it was also deep snow, so I kept my skins on which added a lot of circuitous route finding to avoid having to take them off every fifty feet to go over a log.

I hear the swamp/marsh is horrible in spring and summer when you have to bog your way through a few inches of water.

After the swamp the trail climbs up past a beautiful little creek and then you pop out of the woods in a huge open glacial valley. The glaciers on Kulshan are huge but the scale of these old moraines and trenches makes you realize how massive they must have been a long time ago. 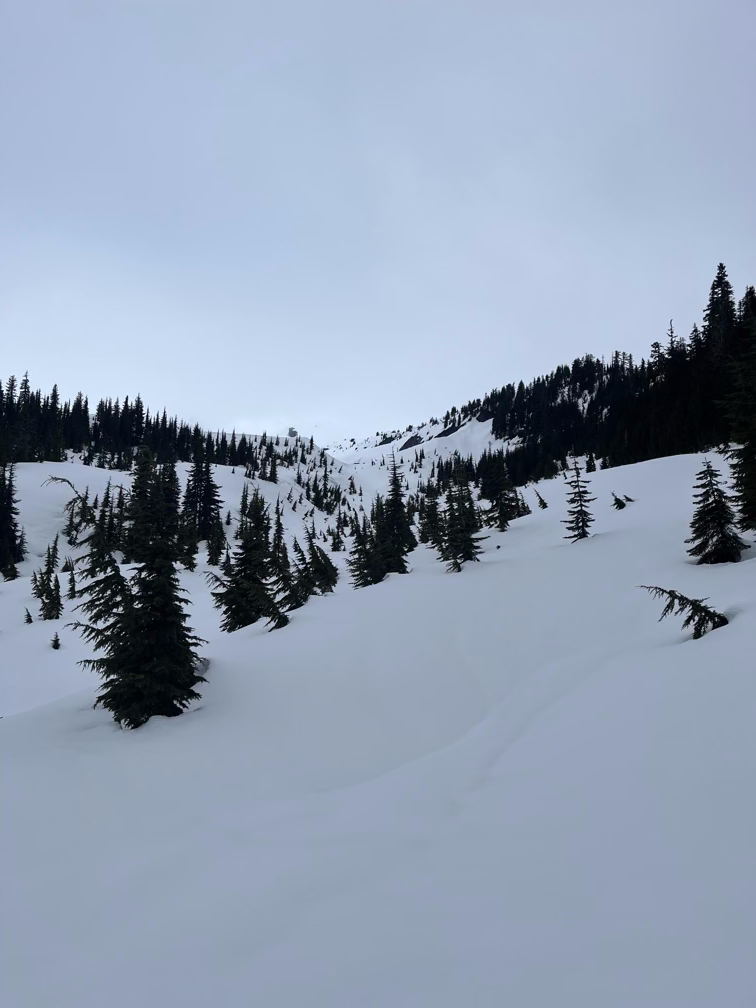 My first view of the real boulder glacier proper came when I had to cross below this icefall. Icefalls and the seracs can be really dangerous in warm conditions, when rocks and ice chunks will fall out unexpectedly. I was surprised not to see anything fall off the icefall but in any case I was able to skirt around it at a safe distance. Right around when I was navigating under the icefall a cloud blew in and for the next two hours I was in a total whiteout. At times the whiteout was so bad that when combined with the white of the snow I couldn’t differentiate the ground from the sky, making it impossible to judge where the terrain I was on was going up or down or about to drop off an edge. At one point I actually got nauseous after a series of unexpected small drops. Eventually I settled on holding my poles out in front of me to gauge whether the ground was going to change angle, which helped a lot. 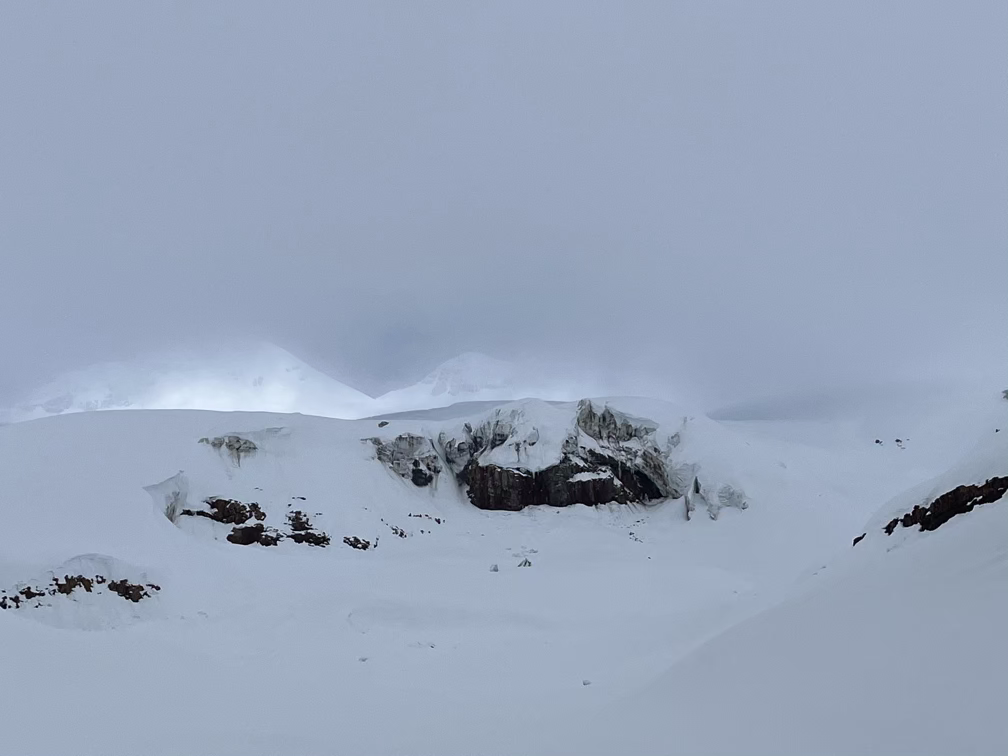 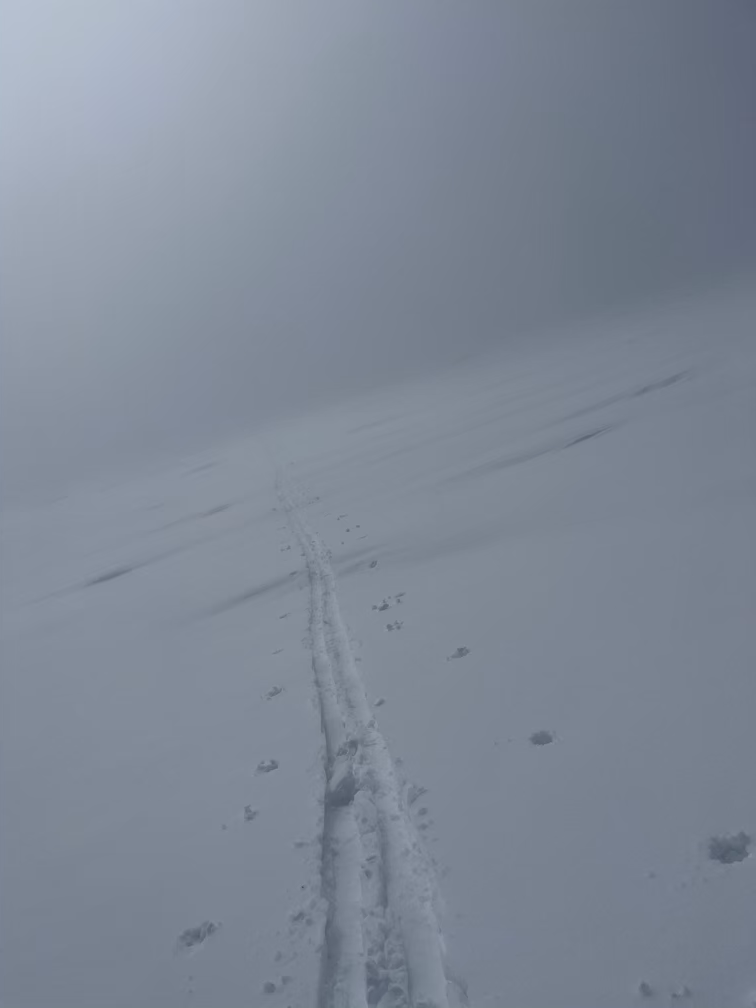 For a while I was navigating through a whiteout with the occasional brief moment of clear views. Between the GPS and those moments I was able to make my way around the icefall without much concern and get up onto the Boulder ridge proper, which is where I would have been earlier if I had taken the standard “climb up the cliff” option that people use in the summertime. 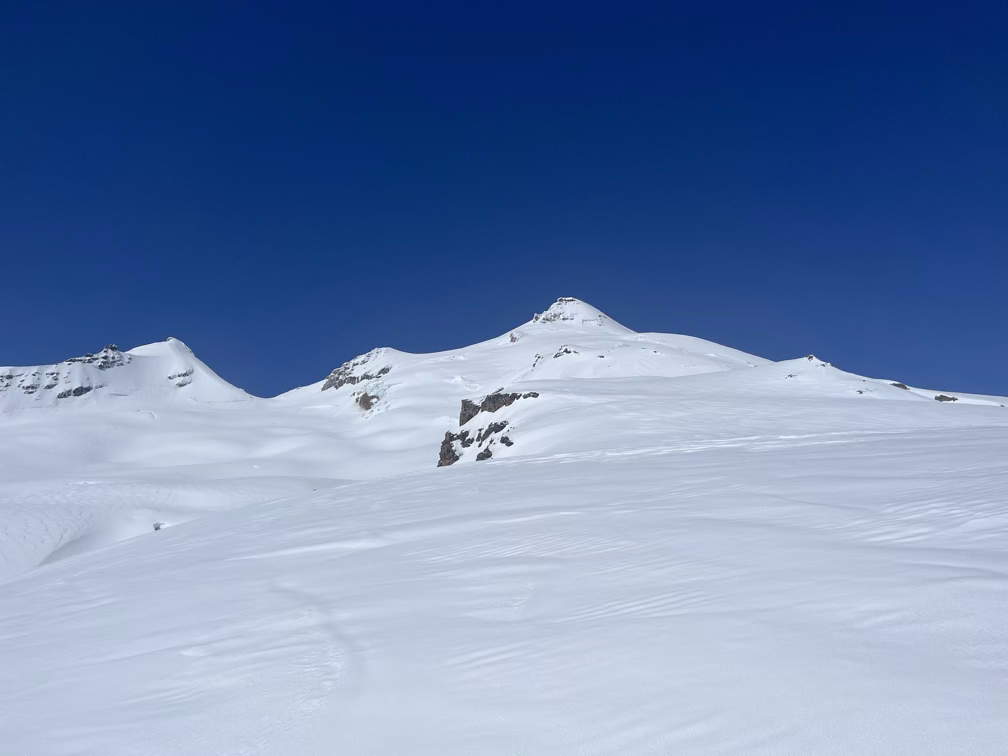 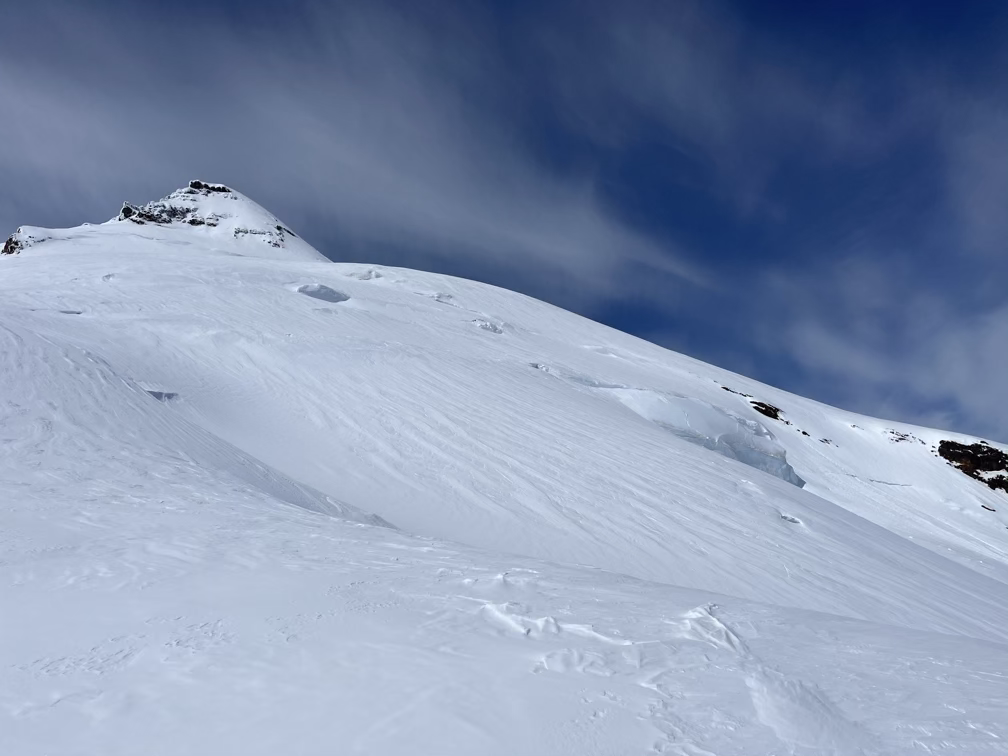 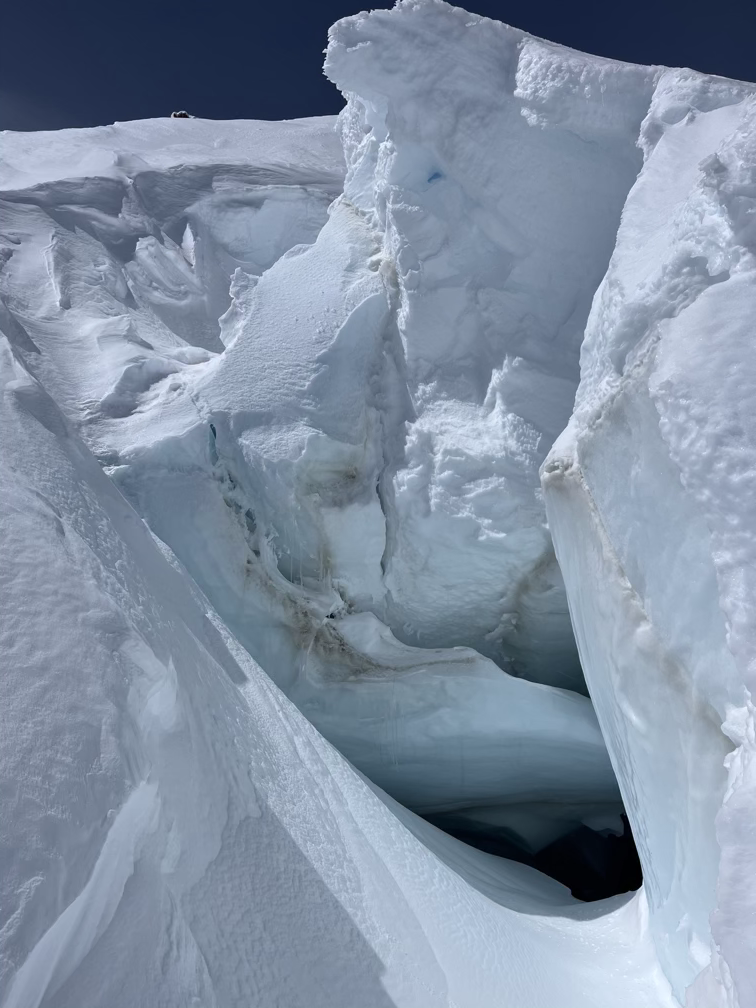 All signs pointed towards the crevasses being very well covered but just to be sure that things were really filled in I meandered over to one of the open crevasses to check that it wasn’t a bottomless pit. As expected, the base of the crevasse was well filled in with snow. Not a guarantee that you won’t plummet deeper in but a good sign that there had been a lot of recent snowfall in the last few weeks. 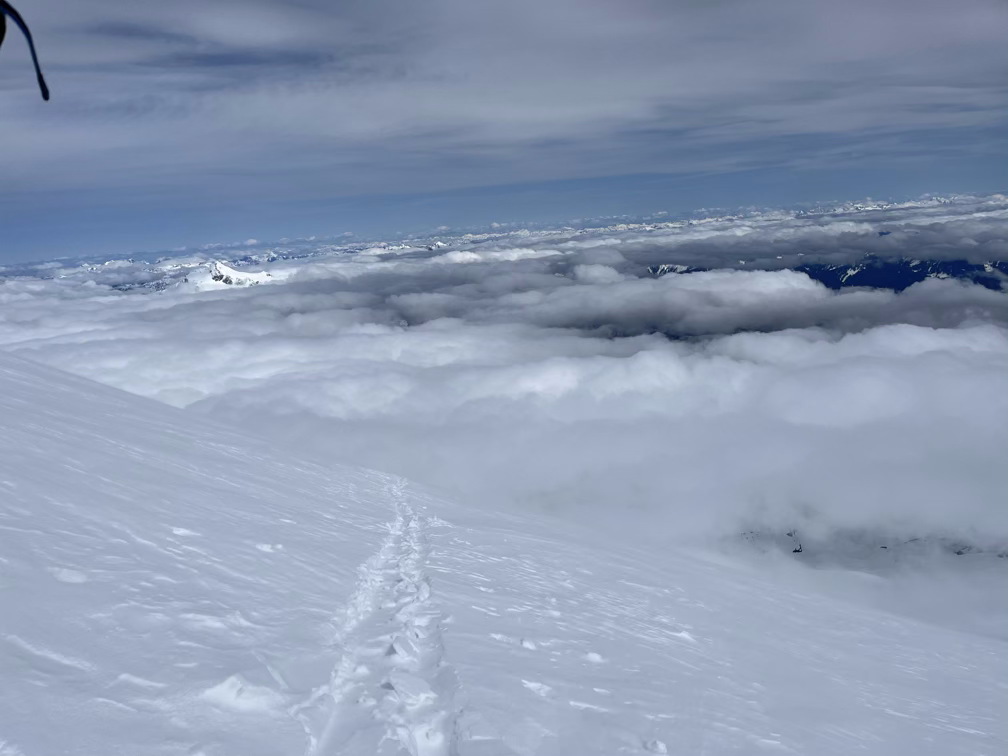 Around this time I made a somewhat critical error as far as the skiing was concerned. The wind picked up and the sun went behind some upper-altitude clouds and I noticed that the surface layer of snow was starting to get icy. This is pretty normal as you’re gaining altitude, since temperatures tend to drop as you get higher up. What I didn’t realize was that the entire mountain, all the way back down to about 6,000’ or so was now below freezing. So not only was the snow getting icy where I was but also much lower. Had I turned around at this point the skiing would have been fine and I would have been a little bummed not to summit. Instead, I pushed on, summitted, and then skied the absolute worst ski conditions I’ve ever been in for 4,000'. 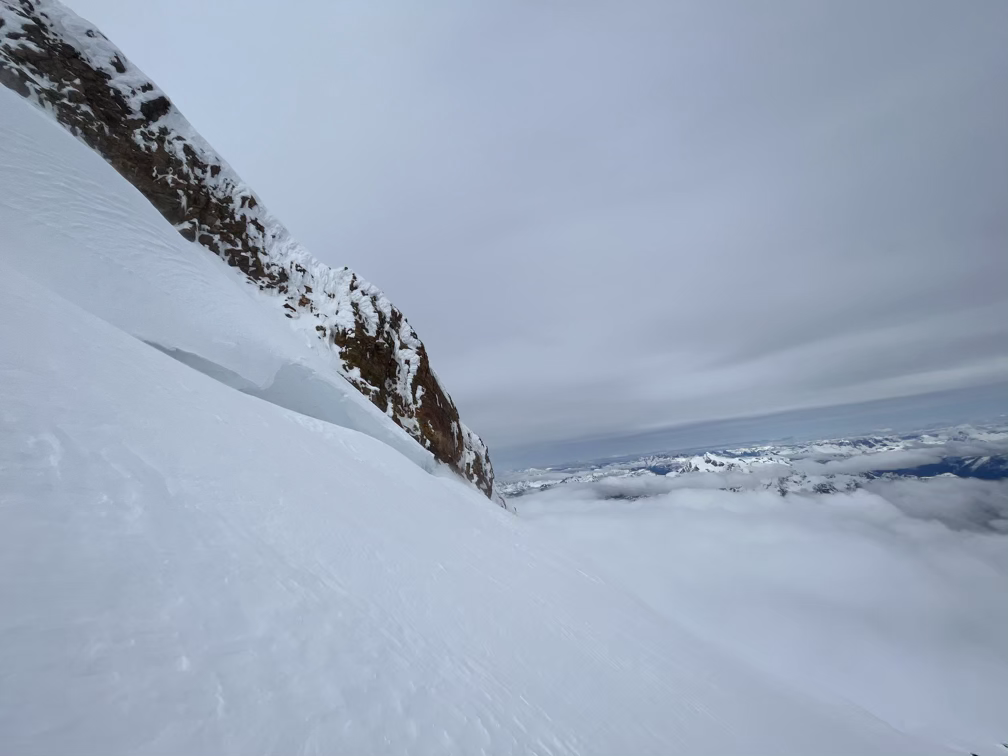 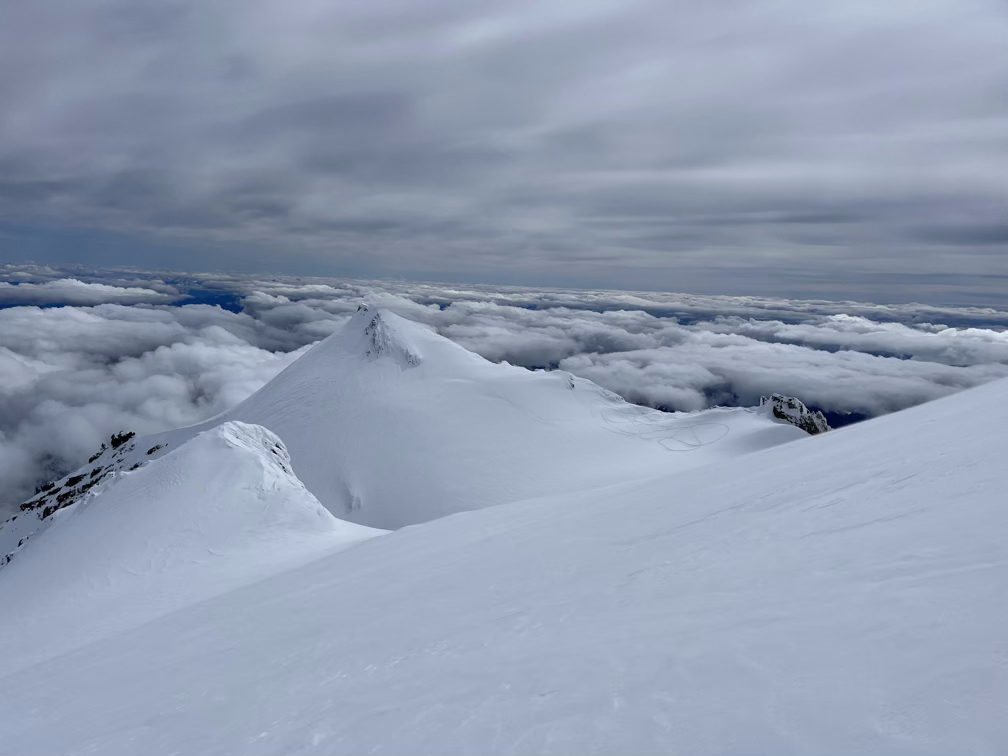 “Why not” BECAUSE THE SNOW IS ALL TURNING INTO ICE YOU IDIOT!

I was pretty proud of myself, an 8,400’ day is an astounding amount of elevation gain in one day. The skiing, until I got back down to about 6,000’ or so was as bad as it can possibly be. Because the sun was out at noon the top layer melted and then re-froze creating a “crust”. The skis, bindings, and boots that I use are very lightweight which normally isn’t too much of an issue but this particular snow is the absolute worst for me. The crust “grabs” the skis, especially the tip and the tail, and sort of throws me around when I try to make a turn. So the only solution is to side-slip down, which I did for almost forty five minutes down thousands of feet of terrain. Eventually the temperatures went over freezing and the snow softened and I was able to ski back to the marsh and then skin back out, a bit exhausted. 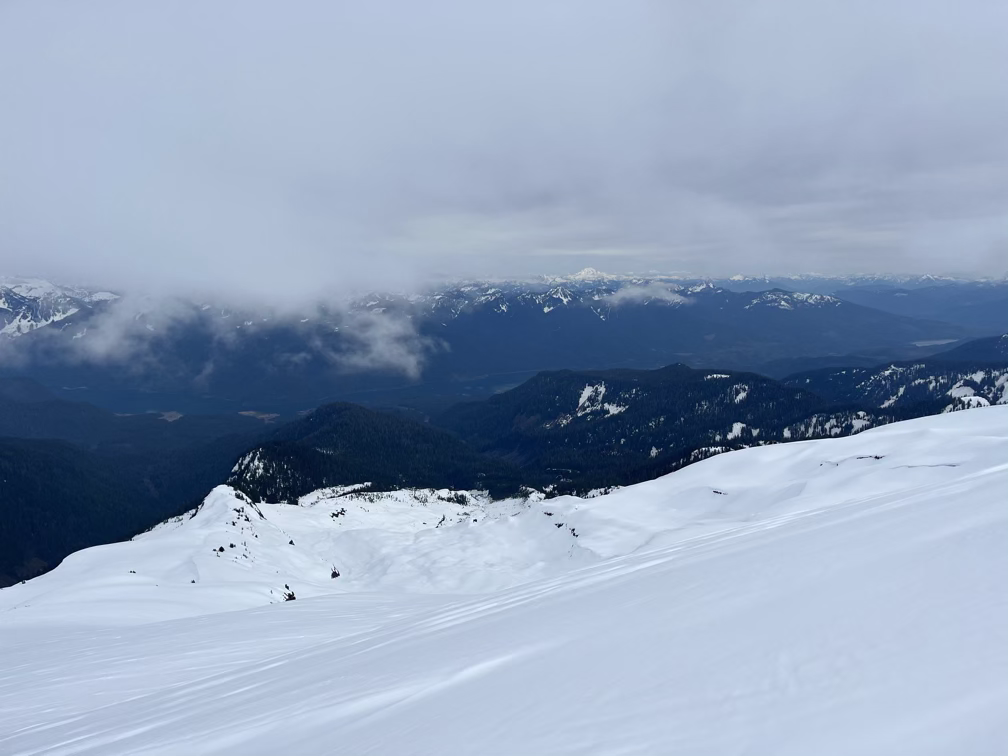 Overall a decent day and I learned the important lesson that I have to pick ahead of time whether I am prioritizing the summit or the skiing! 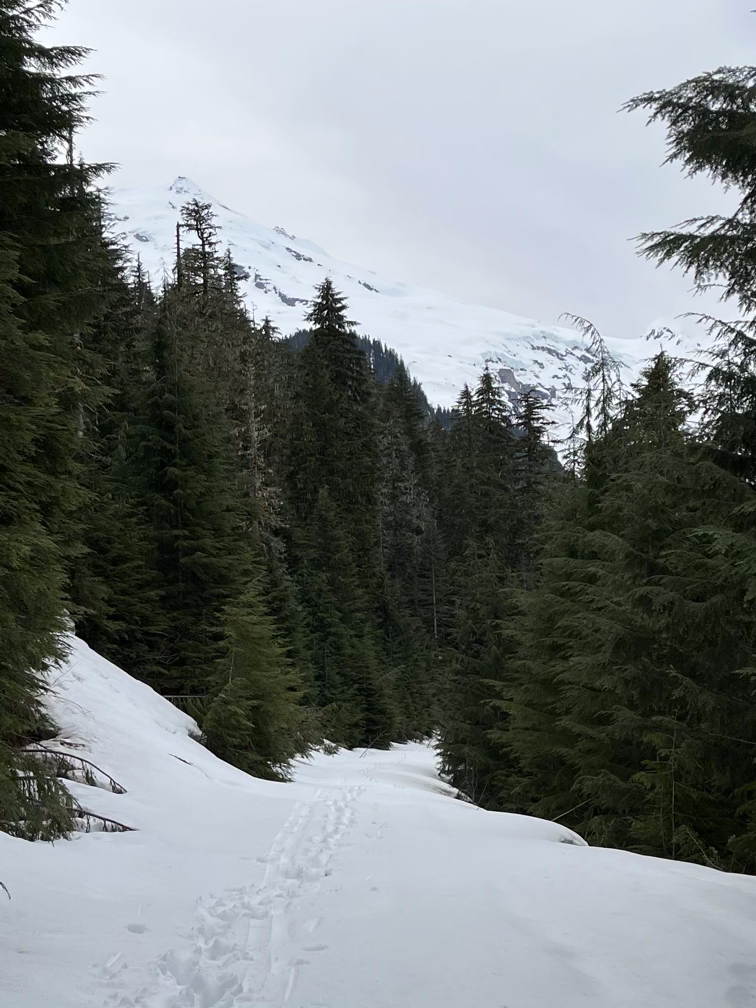