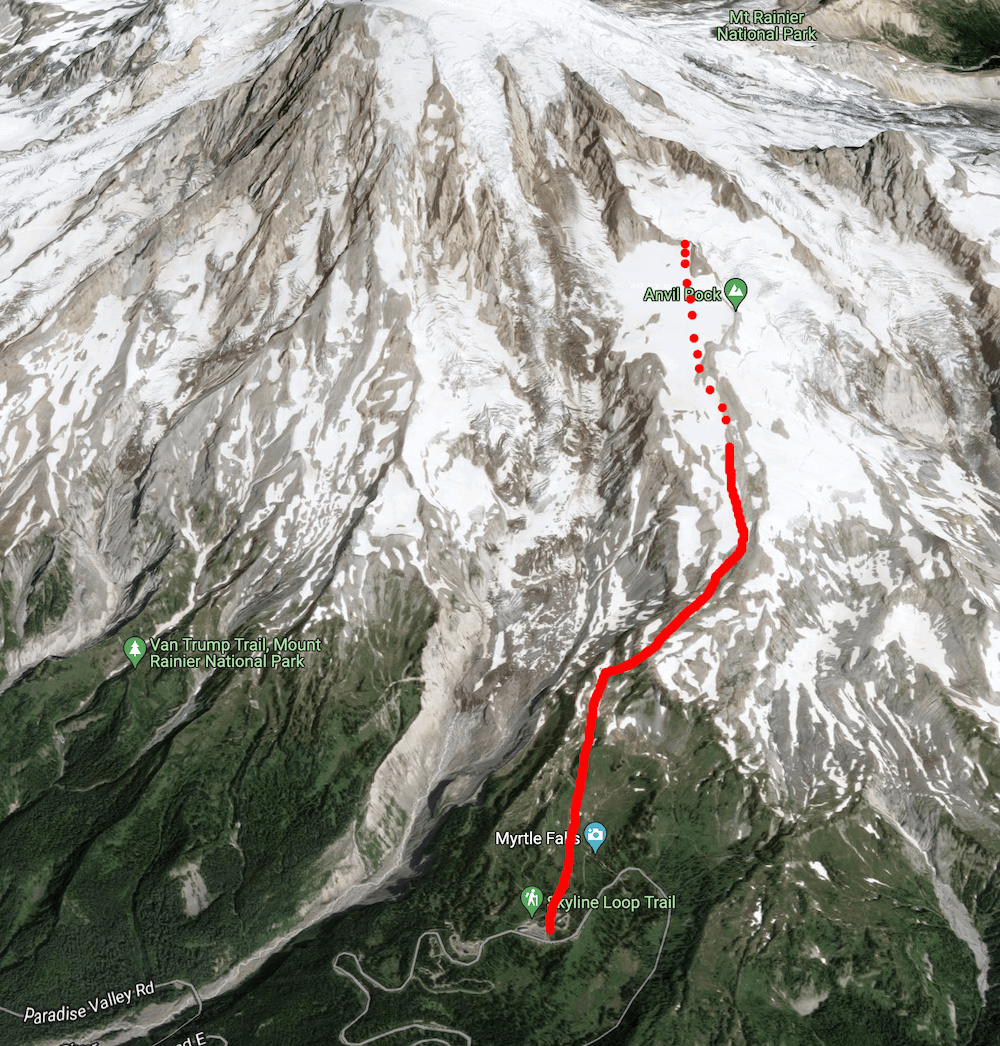 2023! Time to ski some volcanoes! To get back into volcano shape I took a tour up from Paradise with Jess, Julien, and Greg in early January. Keeping our plans mellow given the anticipated blizzard we planned to skin up as far as we could toward Camp Muir (10,188’) from Paradise (~5,500’) and then turn around whenever weather conditions started looking dicey. 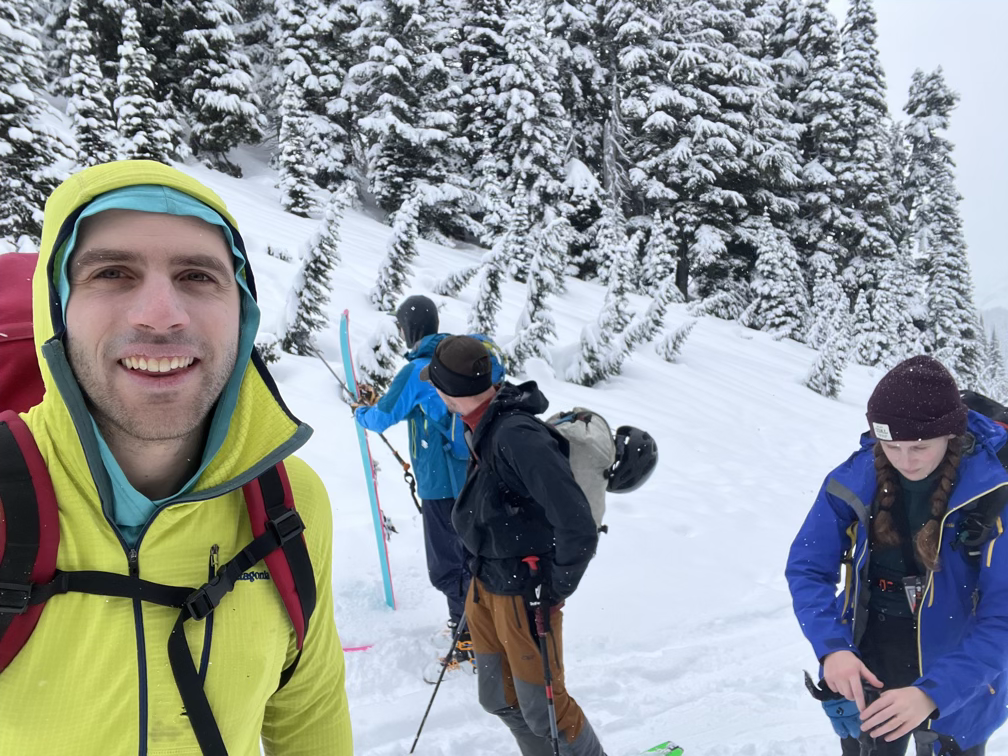 The gate to drive up to Paradise, the main trailhead on the south side of Rainier doesn’t open until 9:00am, so we had a leisurely departure from Seattle around 6:45 and got our boots on and ready to start walking around 9:30am or so. We were a little worried because pretty much all of the skiing in Washington got soaked with significant rain the week before this outing, but luckily there was already about 6" of fresh snow on the ground and at the rate it was coming down in the parking lot it was looking like we would be skiing down in about 8-10" of fresh powder by the end of the day. We skinned up quickly to Panorama point, stopping to de-layer and eat some snacks. 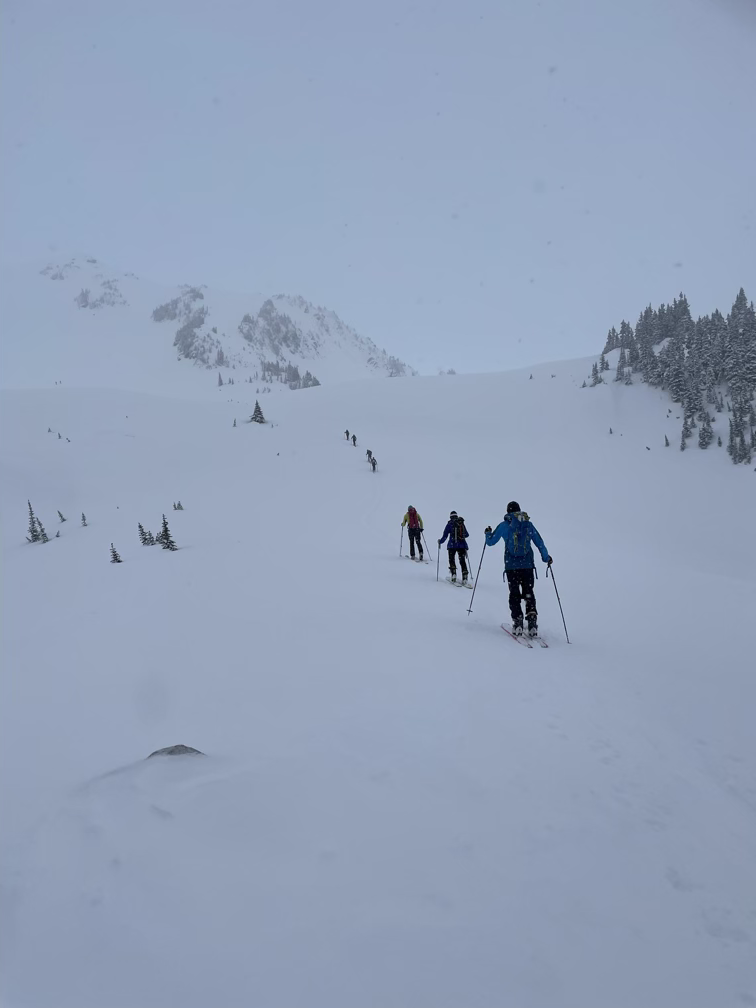 Panroma point is at about 7000’ and is the only substantial obstacle on the way to Camp Muir. It’s also a potentially dangerous funnel in avalanche conditions. Fortunately, the sticky snow conditions were not concerning at all and even made it possible to skin straight up the low-angle section of the chute. This is the only time any of us have been to Rainier and not had to take our boots off to walk up. 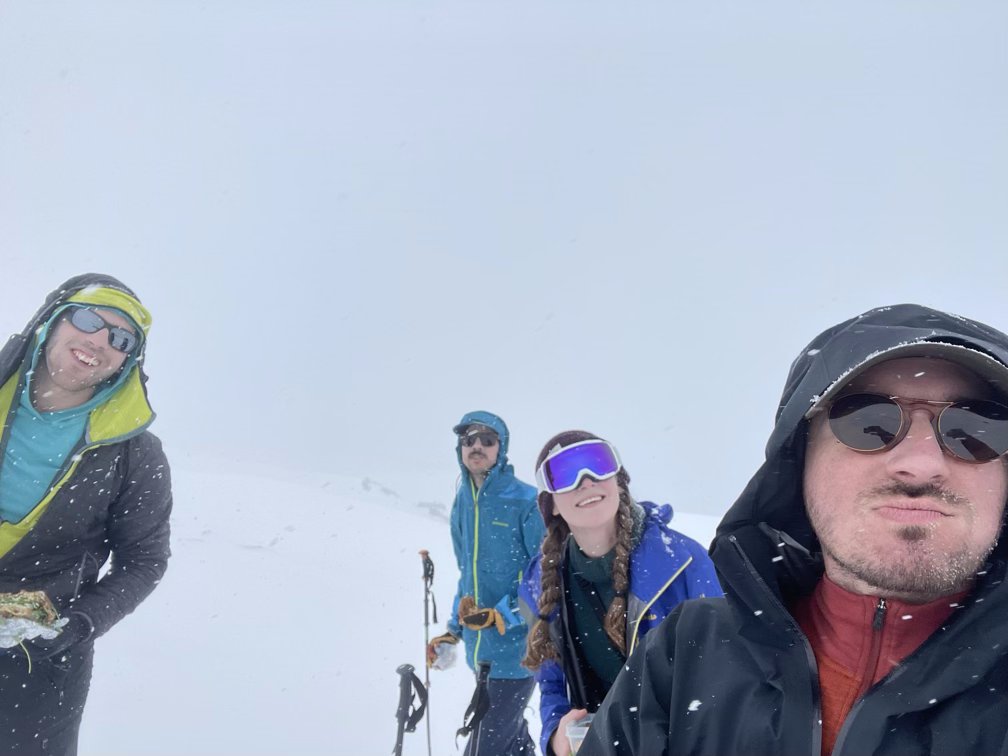 We took a lunch break at the top of Panorama point and then continued on, removing our skis for a brief icy section before starting up the main rock band that takes you up and onto the Muir Snowfield. 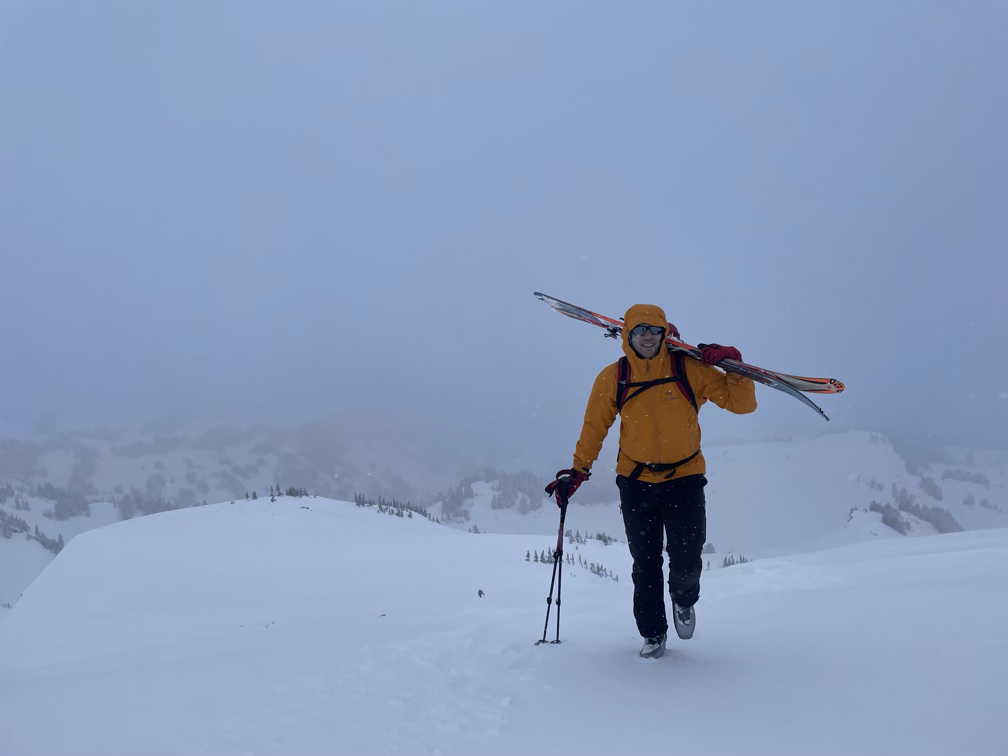 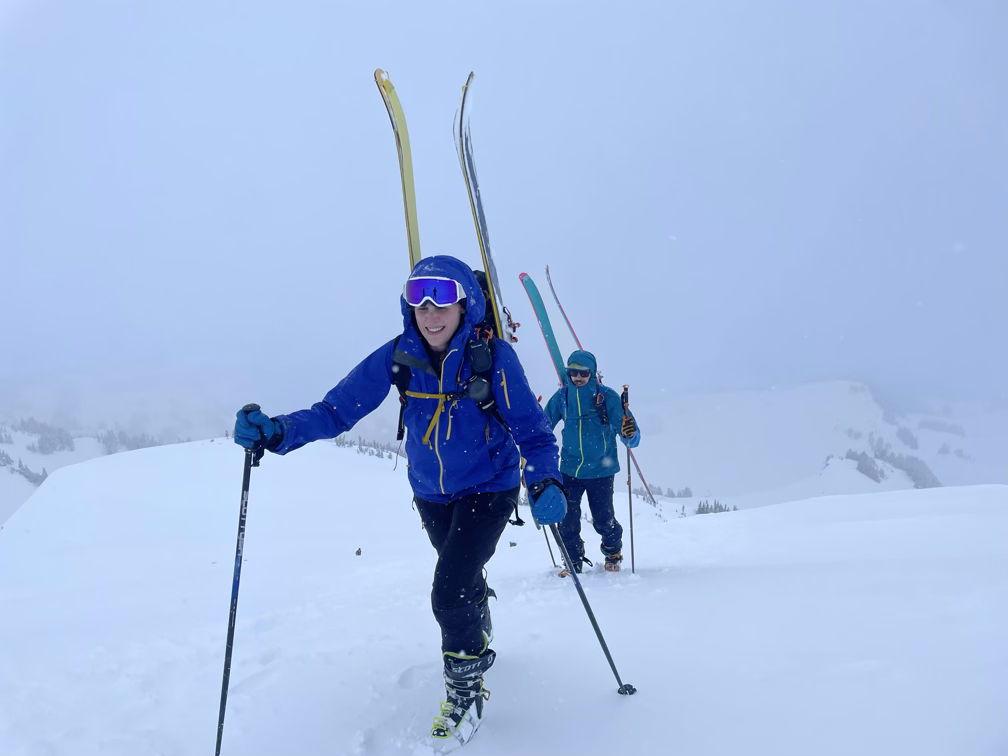 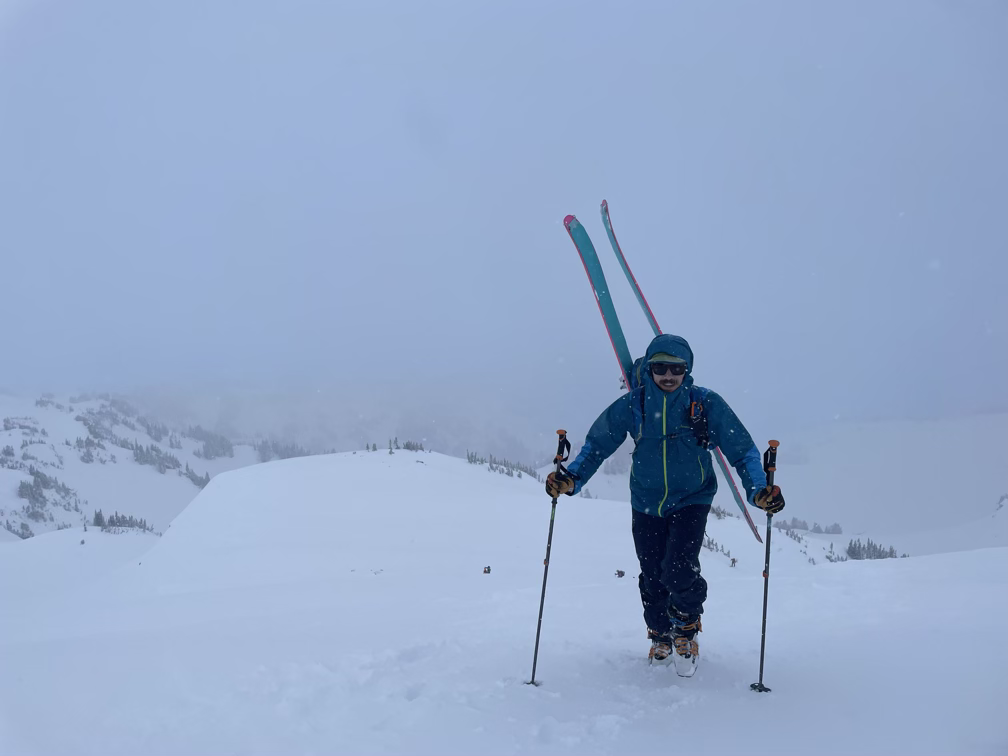 At this point, conditions were getting a lot more blizzardy and visibility was deteriorating. We weren’t quite at unskiable whiteout, but we weren’t too far from it. We tromped on with diminishing enthusiasm until about 7500’ where you could still see Panorama Point behind us, but really only barely. The prudent move at this point was to turn around, since losing sight of the point means we would have to switch to navigating by GPS, which is always a hassle especially on skis. It’s difficult to go wrong on Rainier, most routes would take us back to Paradise eventually, but it’s pretty easy to get off track and have to put your skis back on and skin for a half hour and we wanted to avoid that. So we spun around here and started skiing back down. We did have the distinguished honor of being the only people to go that high on that day, except for two snowshoers who rudely walked five feet past our turnaround point and then immediately called it quits and turned around.

When you’re in even a partial whiteout the lack of depth perception means your normal cues for motion are all messed up. More than once I had the experience of getting going downhill and then feeling like I was moving, even though in reality I had come to a stop. When your brain realizes you’ve stopped it does so with this alarming lurch, which oftens throws me off balance and onto the ground. A few falls later, we got back to two wonderful steep sections below the Point where we got some fun deep turns in. The skiing was difficult because of the wet snowpack and then, as soon as we dropped below the Point the ice in the snow started throwing us all over the place.

A fun day out on Rainier and good encouragement to keep getting in shape for the real trips that will be coming soon!