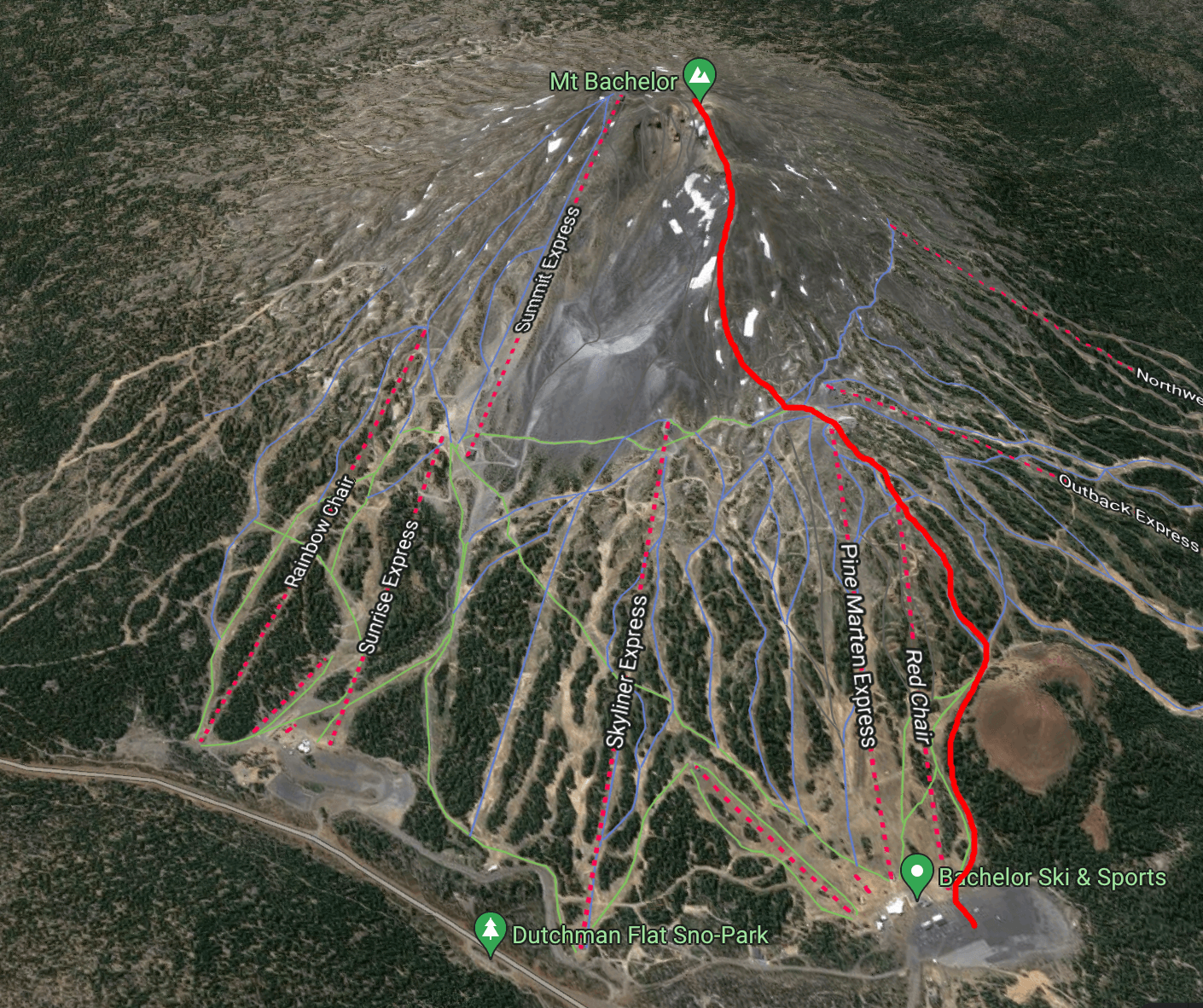 Mount Bachelor is the only cascade volcano with a ski lift going straight to the summit. A dormant stratovolcano, Bachelor actually sits on top of a shield volcano which has a number of cinder cones in the area. Bachelor last erupted sometime around 10,000 years ago in a series of lava flows but there is no summit crater. Of note is that much of the surface of Bachelor (and nearby volcanoes) is actually ash from the explosion of Mt Mazama which formed modern day Crater Lake. Perhaps one day I will actually see the surface of the lake… To climb Bachelor there are two options: you can either take two quick lifts and a short walk to reach the summit in a little under an hour, or you can hike up +2700’ of elevation over a short 3.25 miles.

I woke up in the morning at the Mt Thielsen trailhead to the unexpected warning of “unpredictable” avalanche conditions. The huge storm combined with a dramatic increase in temperatures left the forecasters with a lot of uncertainty about what would happen. Their main expectation was that there was a good chance of large natural avalanches. This boded poorly for Thielsen, which requires you to ascend below exposed avalanche terrain no matter what direction you approach from– I got ready to go hoping someone would arrive at the trailhead and I could join a group, but with nobody there by 10AM I decided to go somewhere safer, so I drove the two hours to Mount Bachelor. 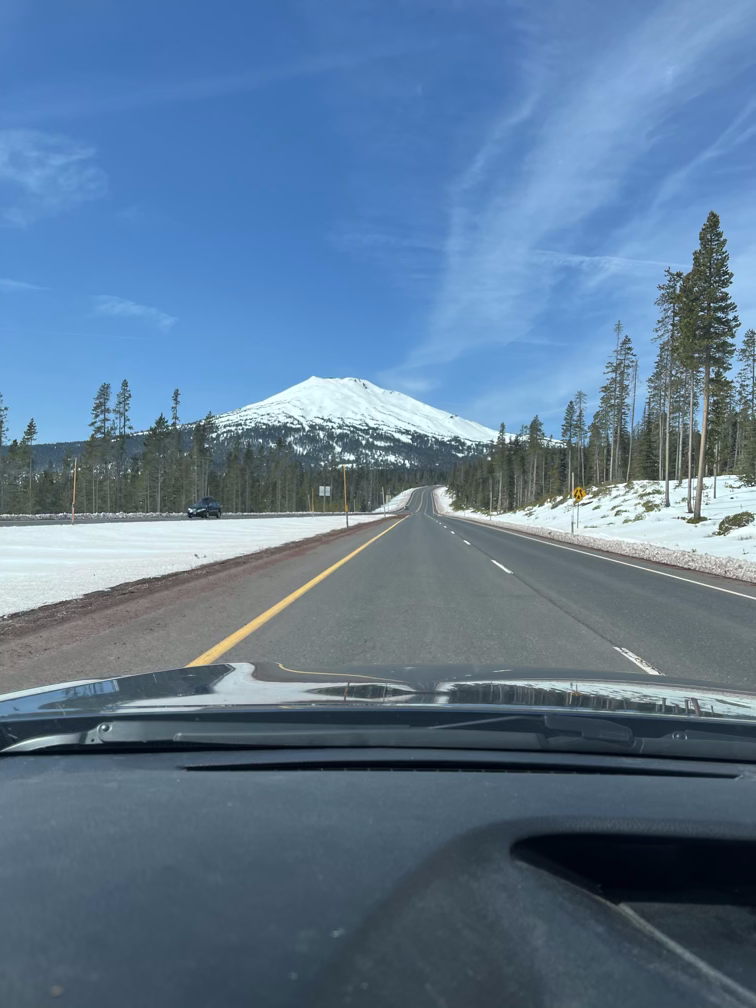 Skiing next to ski lifts

I got to Bachelor at 1PM and their website warned that you weren’t supposed to use the uphill travel routes after the ski lifts closed, which would be at 4, so I thought I had to move quickly to get up in time. 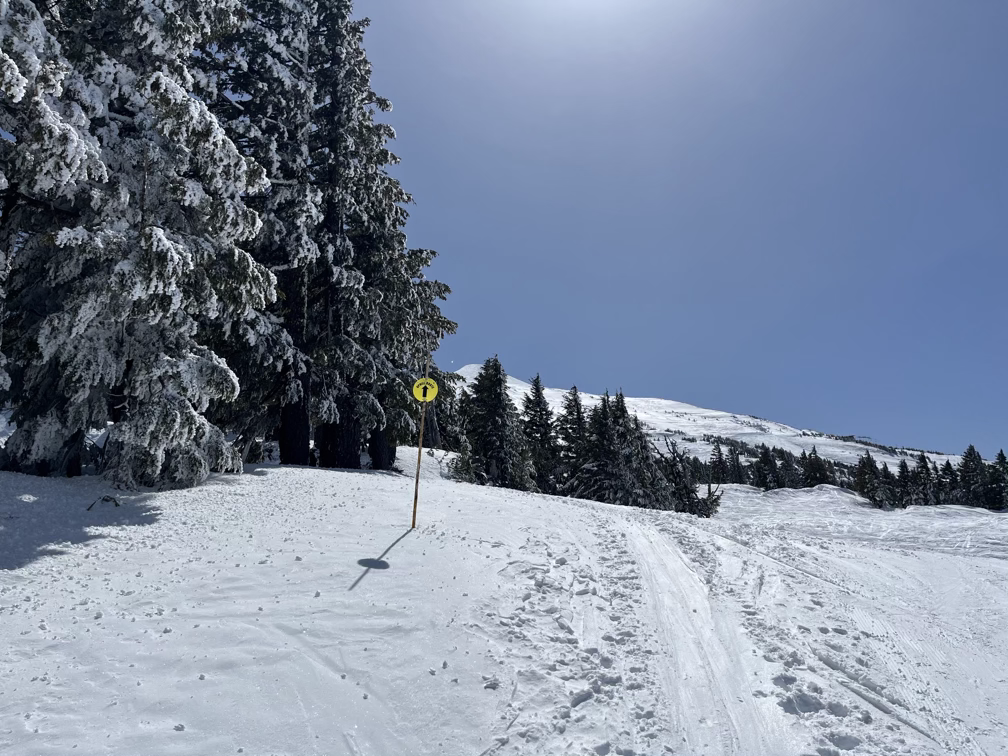 All the acclimatization and training was really paying off at this point, I cruised to the summit in just two and a half hours, including almost a half hour of lunch at the lodge halfway up the mountain. It felt great to be moving fast and not need to think too much about the terrain. 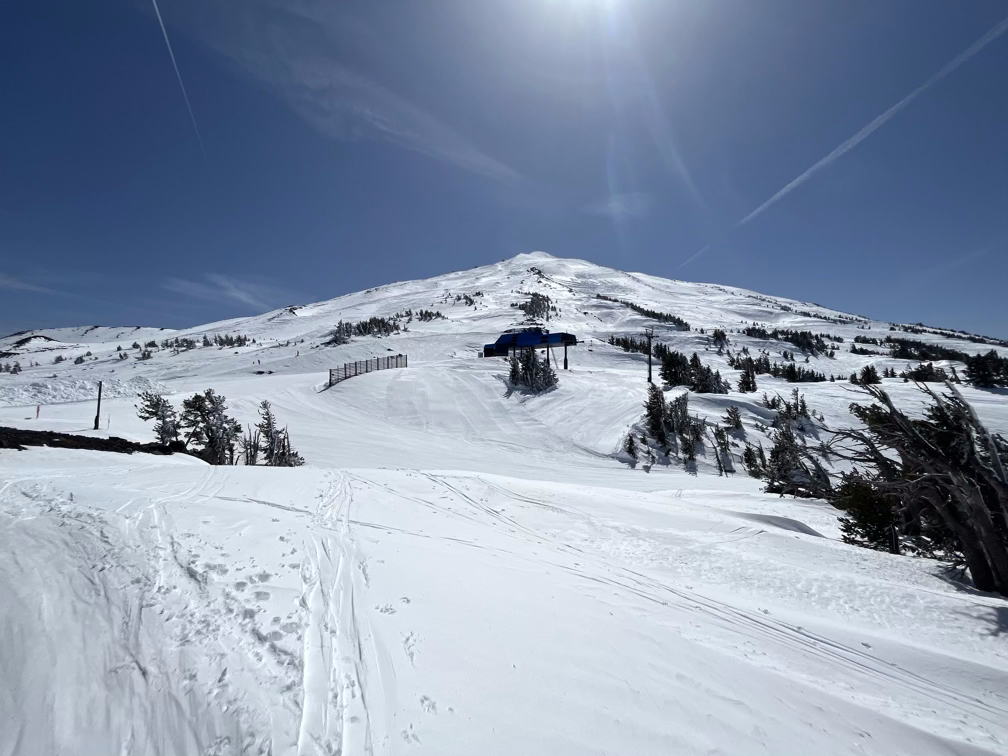 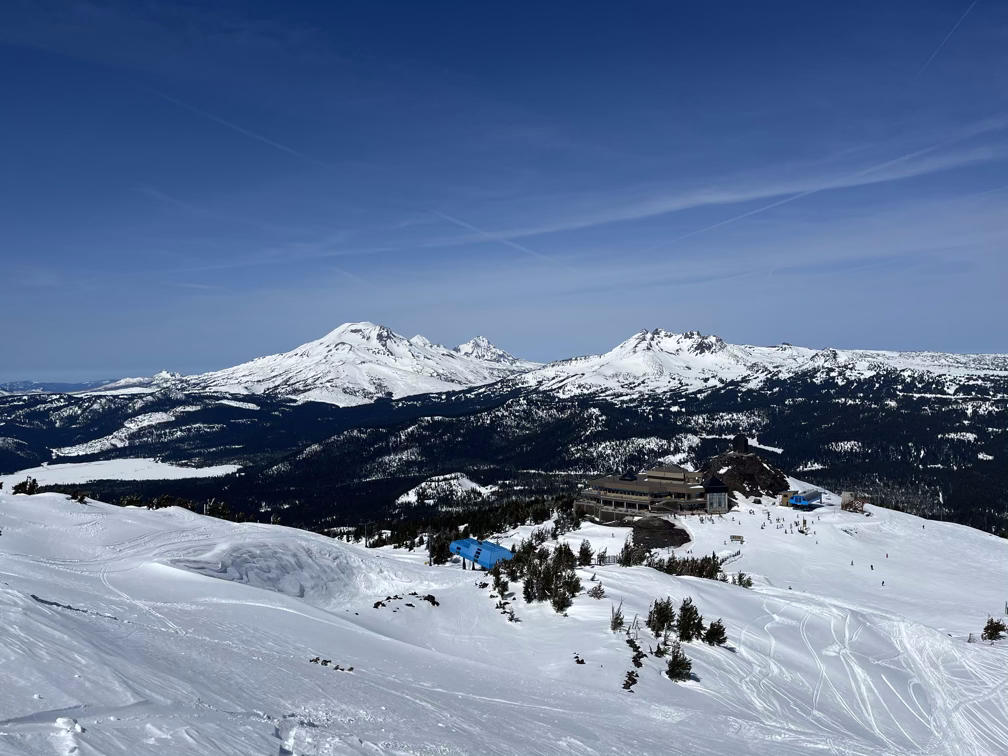 From the summit I had a hazy view back towards the Diamond Lake volcanoes and off into the Three Sisters Wilderness. 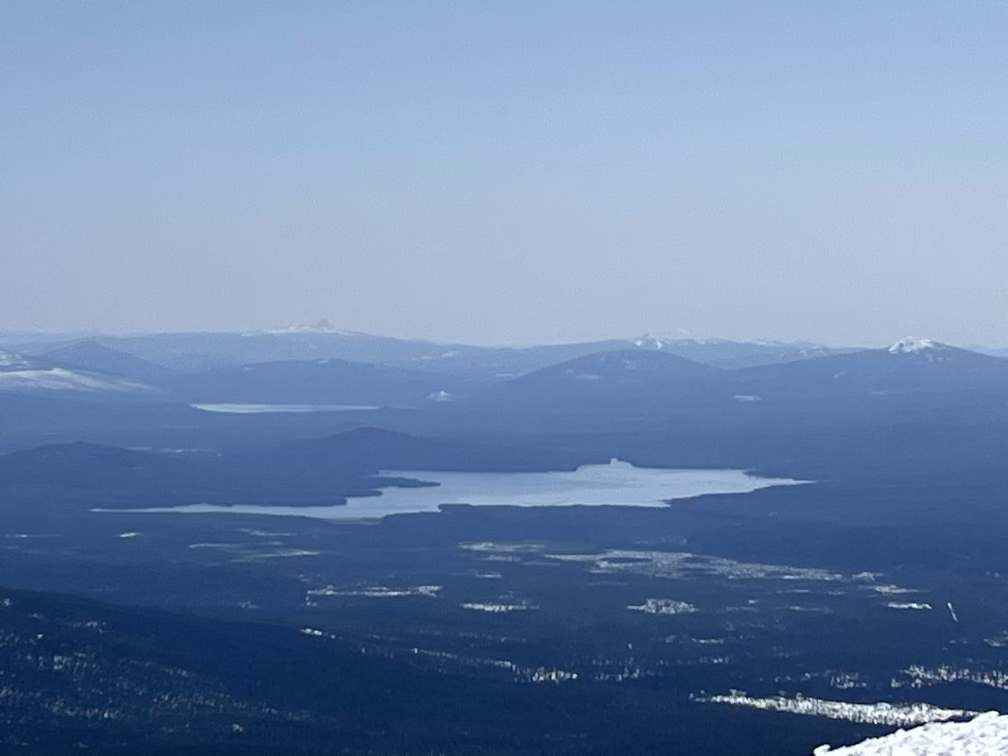 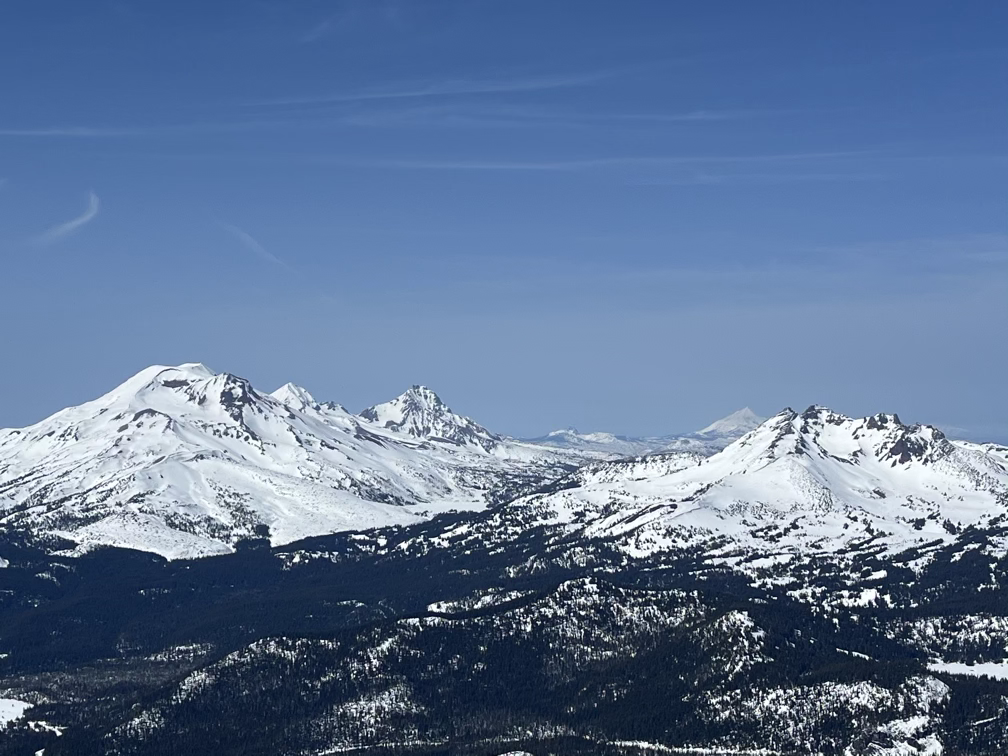 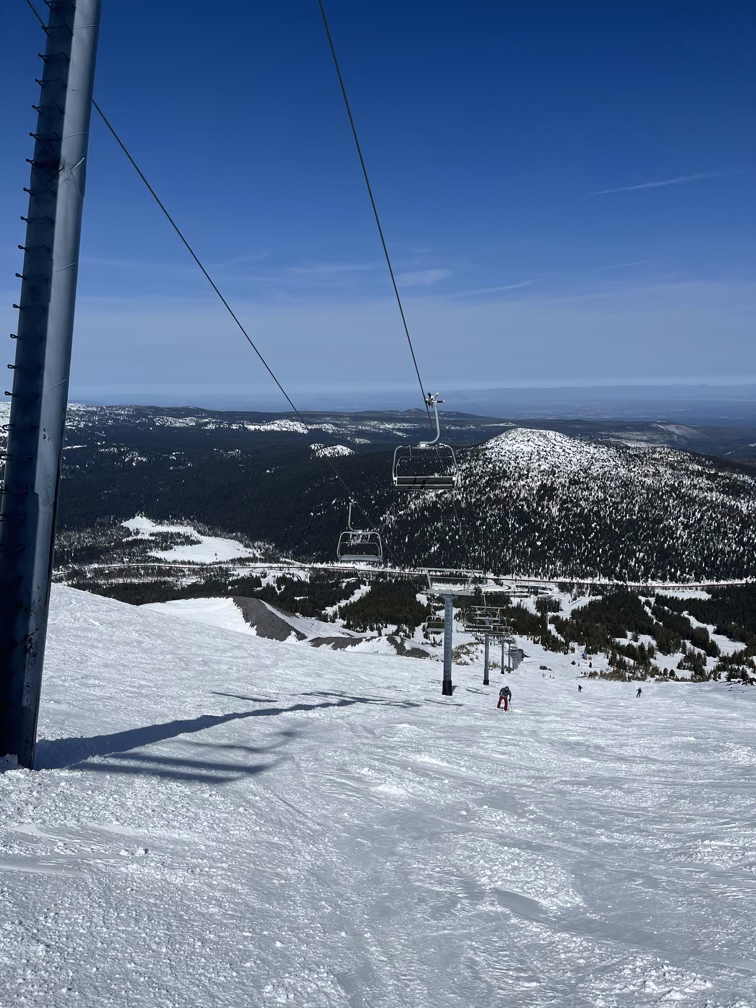 The groomers were in fact, well groomed, which was a wonderful relief after doing so much “survival” skiing on the other mountains (i.e., not falling because that would be bad). After that I headed down to the parking lot to check the weather and with another major storm rolling in on Friday I had to decide whether I wanted to climb another mountain quickly on Thursday as the storm rolled in or if it would be more prudent to just head back to Seattle and relax for a few days until calm springtime weather returned.