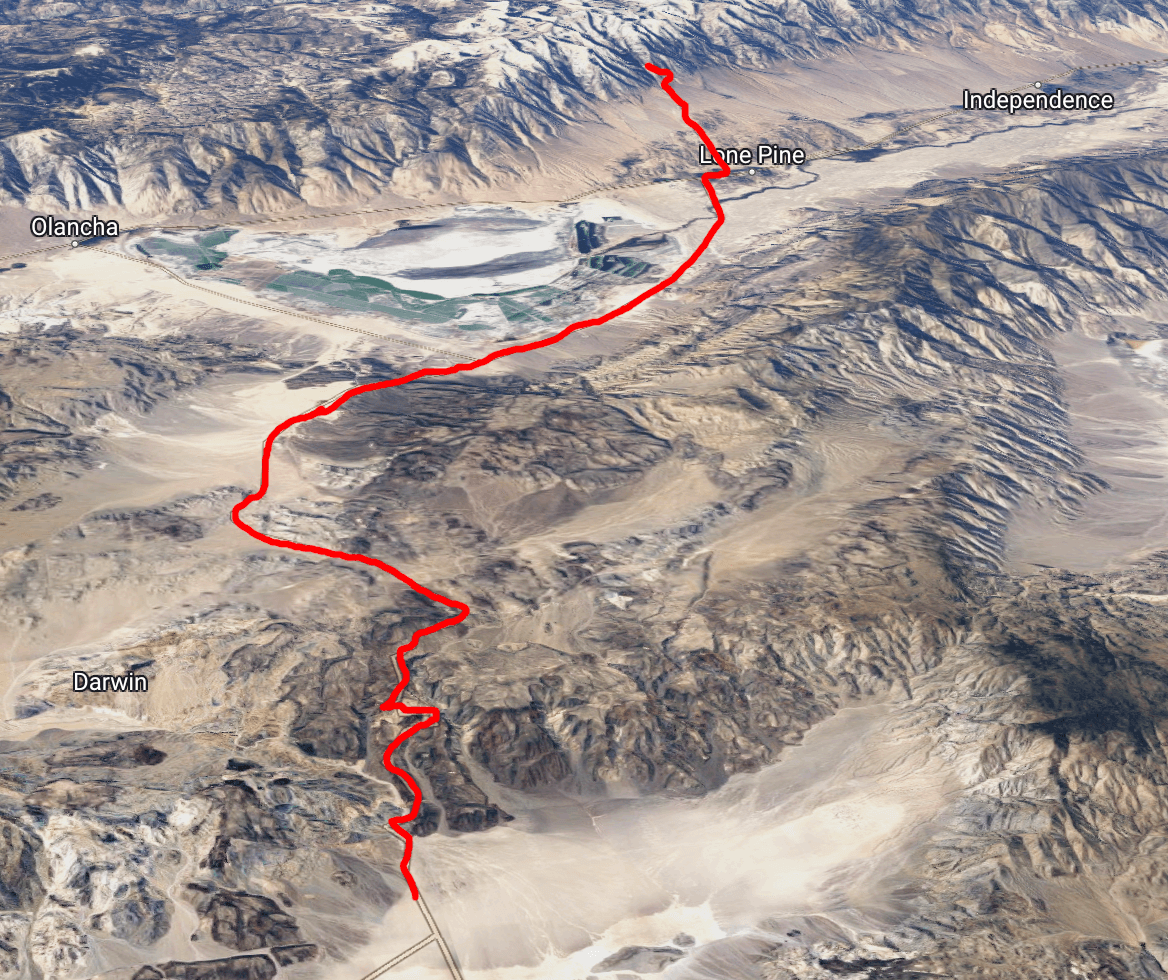 Badwater Basin and Mt Whitney are pretty far apart, even in a straight line by flight. To get from the Panamint Valley at the western edge of Death Valley over to the Sierra Nevadas you don’t have much choice: you have to cross over the fairly intimidating Inyo Mountain Range and then make your way through the often windy Owens River Valley to the base of the sharp eastern cliffs of the Sierras. To fit our trip into five days we chose to make the trek by bike, starting before dawn to avoid the inevitable traffic as tourists drive in and out of Death Valley. From our starting point our ride would take us 60 miles to Whitney Portal, gaining first 4000’ to get over the Inyo mountains and then losing about 2000’ going down into Lone Pine, before hammering out another 4000’ ascent from Lone Pine up to the portal itself, where the car was waiting with our winter gear.

Climbing into the Inyos

Unfortunately the resort store wasn’t going to open until 7, so we couldn’t get ourselves any breakfast burritos. Instead we raided the snack aisles the night before and grabbed some spicy peanuts, goldfish, and snicker bars, and enjoyed those in our tent cabin before starting up the ride. We were both feeling pretty strong thanks to the ten hours of sleep we enjoyed, with earplugs ensuring that we weren’t sleeping according to the whims of any of the other campers.

With just the tiniest amount of light coming up over the Panamint range in the east, behind Telescope, we geared up and started rolling!

By the way if you haven’t noticed Alan (and I) both are always “feeling good” in these videos. Which is not entirely true, between my heat exhaustion and Alan’s brief bout with HAPE on the descent from Telescope, as well my future headaches on Whitney I would rate our condition as being around 60% of maximum for days 2-5 of the trip. Something about being around others makes it a little harder to be totally genuine when the camera is rolling. It’s also a lot easier to sit down and focus on breathing when you feel awful than it is to pull the camera out and record.

The first part of the ride out of the Panamint valley tops out around 8%, which is a pretty brutal grade, even on a road! Most people have trouble biking at all above 10% or so. Definitely a little tough having the start of the ride drain a lot of our energy right away. 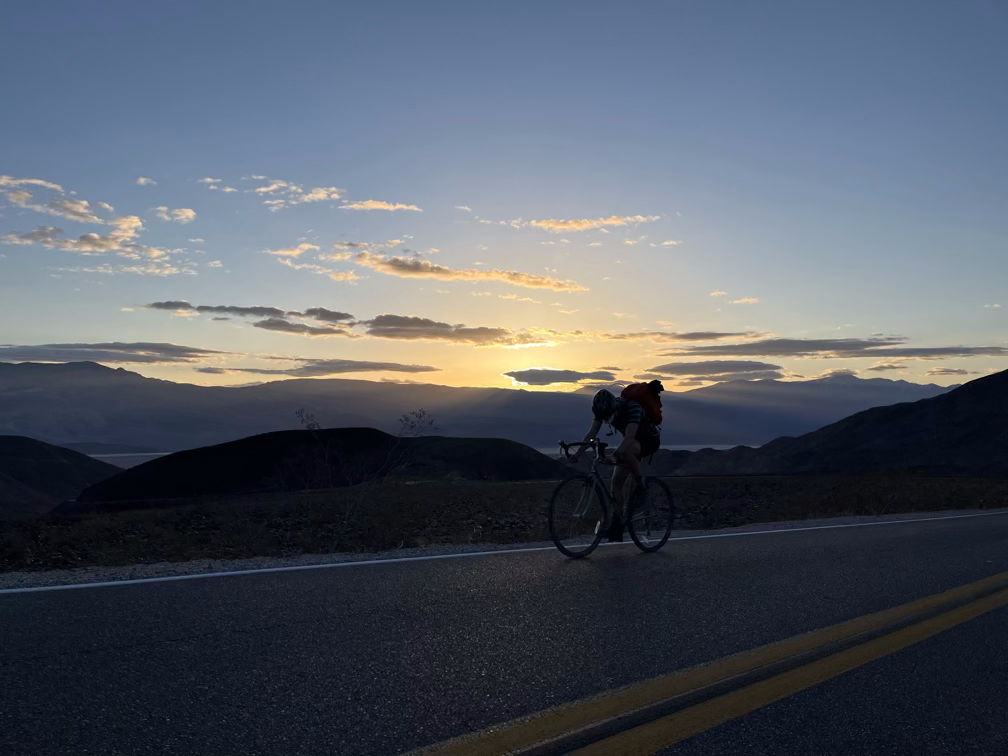 Pretty soon after starting the ride the sun rose and we got up onto flatter terrain, where we got to appreciate a lot of the amazing rock layering that Death Valley is so well known for. 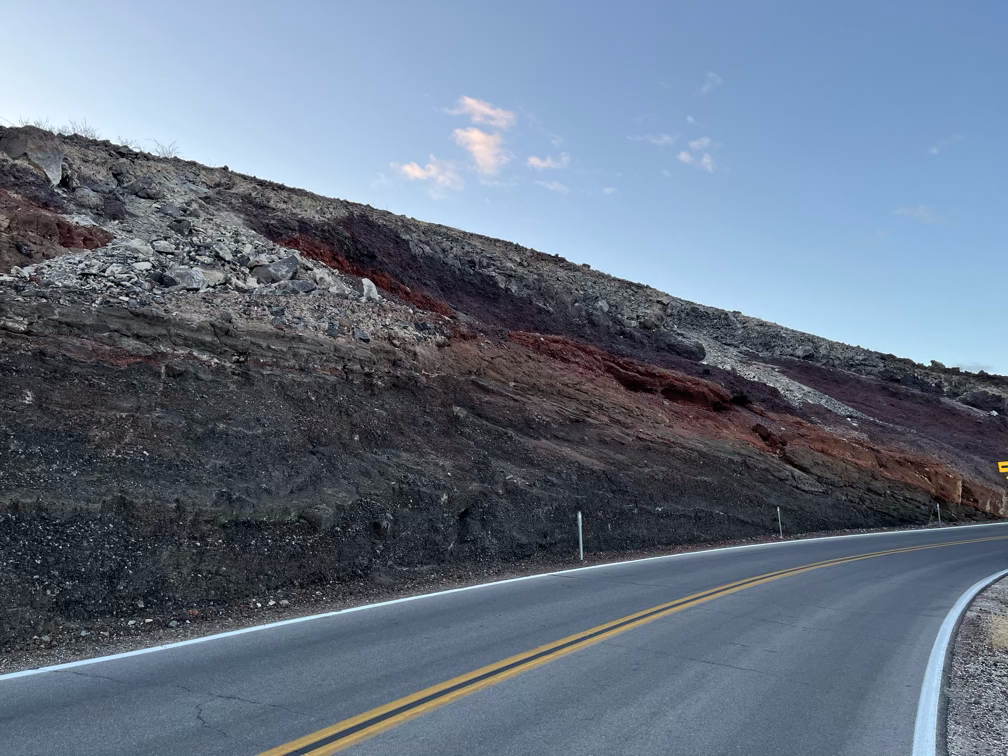 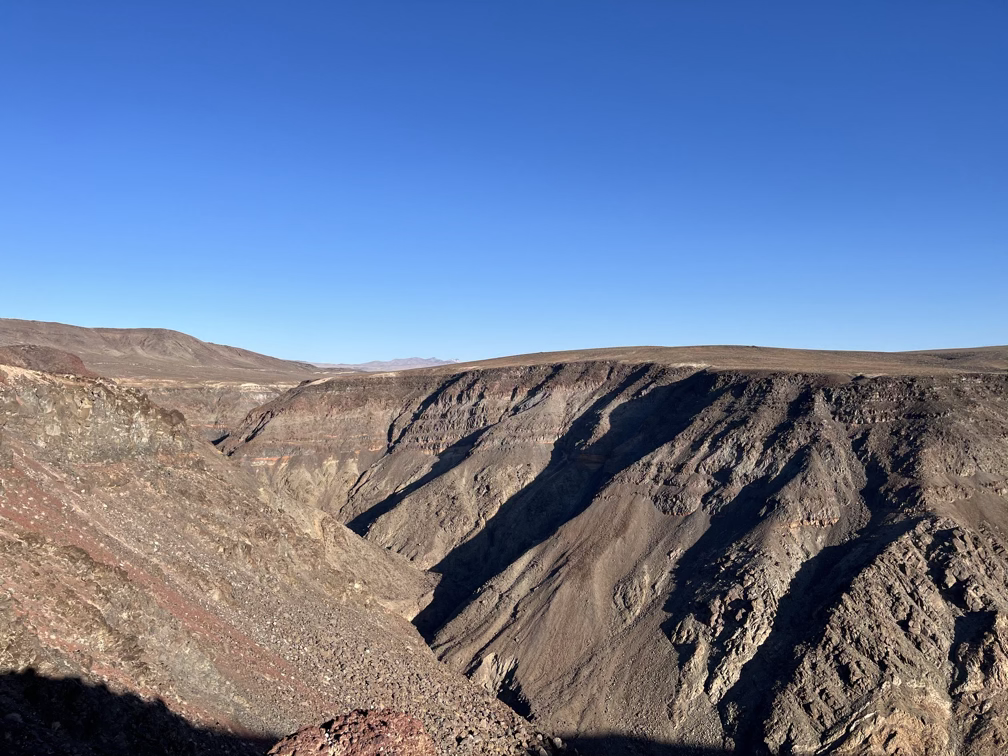 Okay at this point I made a pretty critical mistake, which I am embarrassed to admit I didn’t realize until the fifth day which is actually when Gandalf shows up. It’s perhaps unsurprising that he didn’t make it into the next video.

We made good time once the road started leveling out, cruising up the last 2000’ and on up to the pass a little over 5000’. Along that last stretch we officially exited Death Valley National Park! 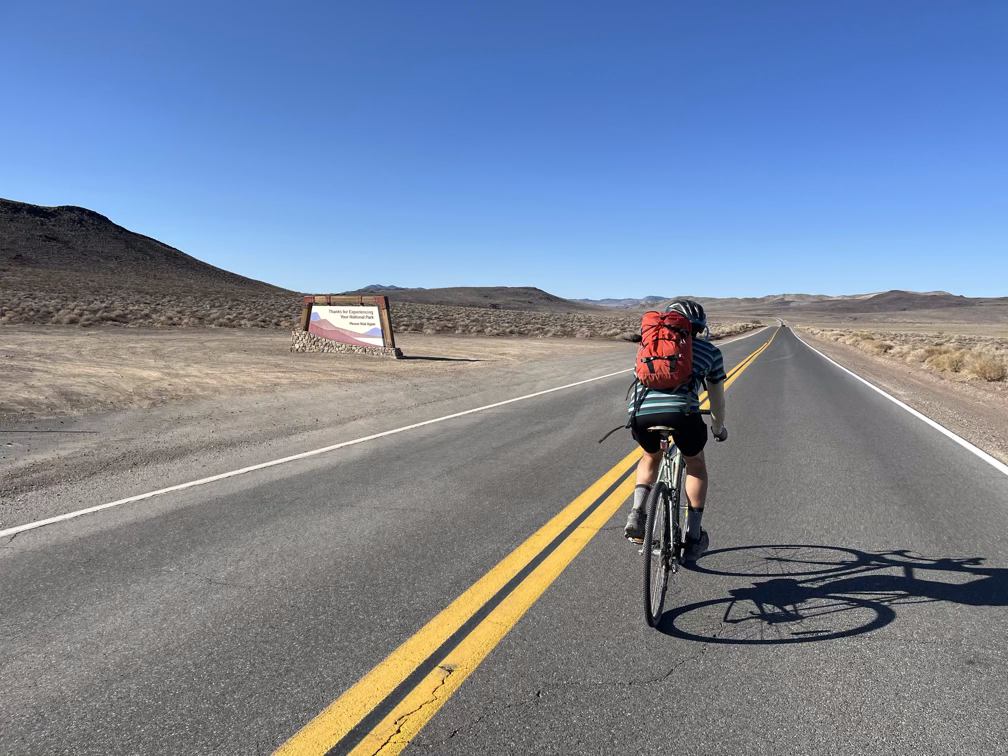 And we got our first views of the Sierra Nevada rising in the distance! I stopped once to grab a photo here on the shoulder and immediately was thrown over my handlebars as my bike dove into six inches of sand, fortunately nothing important got damaged! 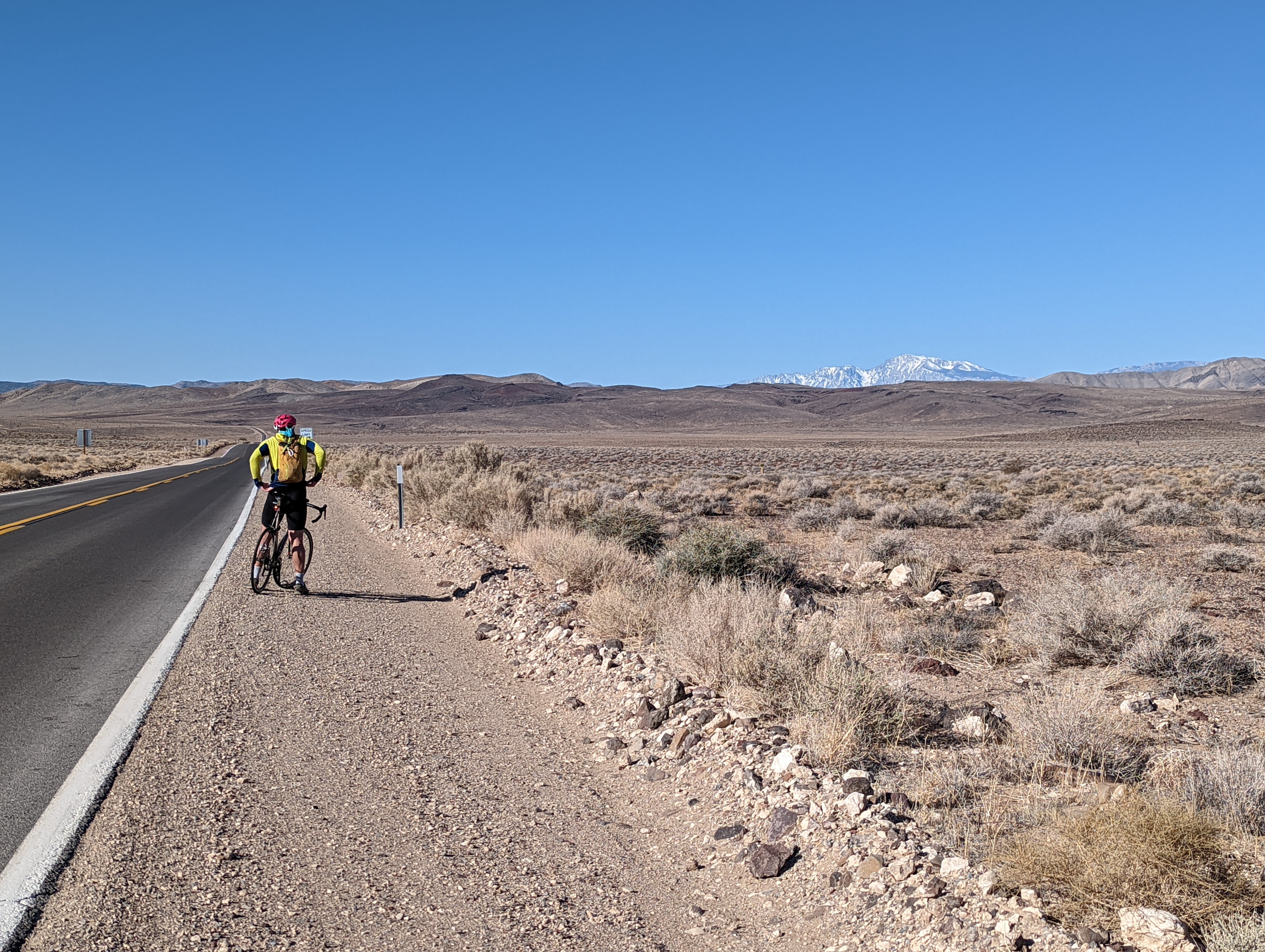 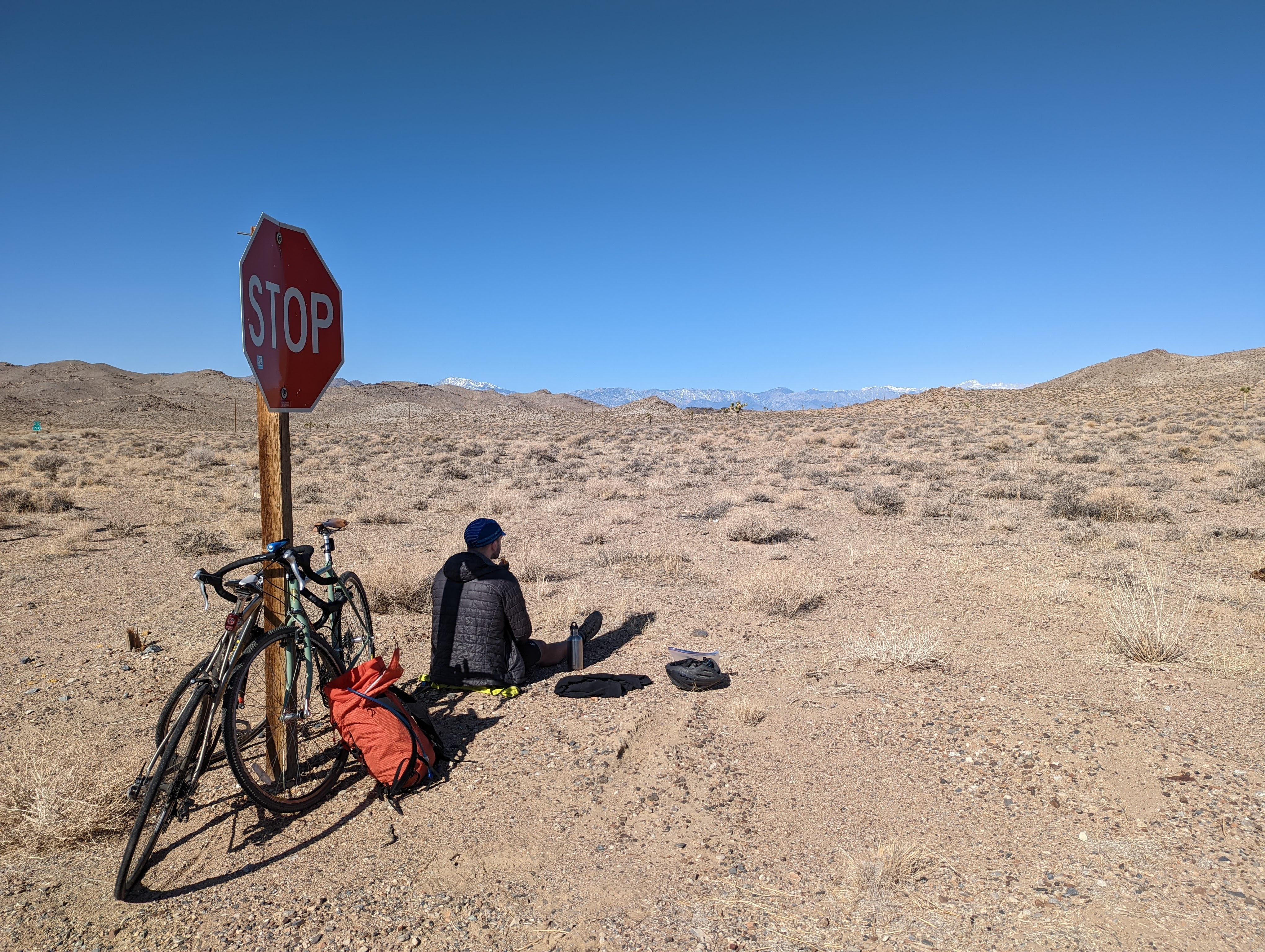 The ride down was another phenomenal experience. The southwest is just such an expansive place and it’s a joy to move through it at a human scale instead of behind the walls of a car. We didn’t see any other cyclists during our whole ride, but I hope other people are out there on these roads, they’re pretty easy to ride and wow they are beautiful!

The twenty miles of downhill went by fast and we could really see the Sierras getting closer and closer by the minute. 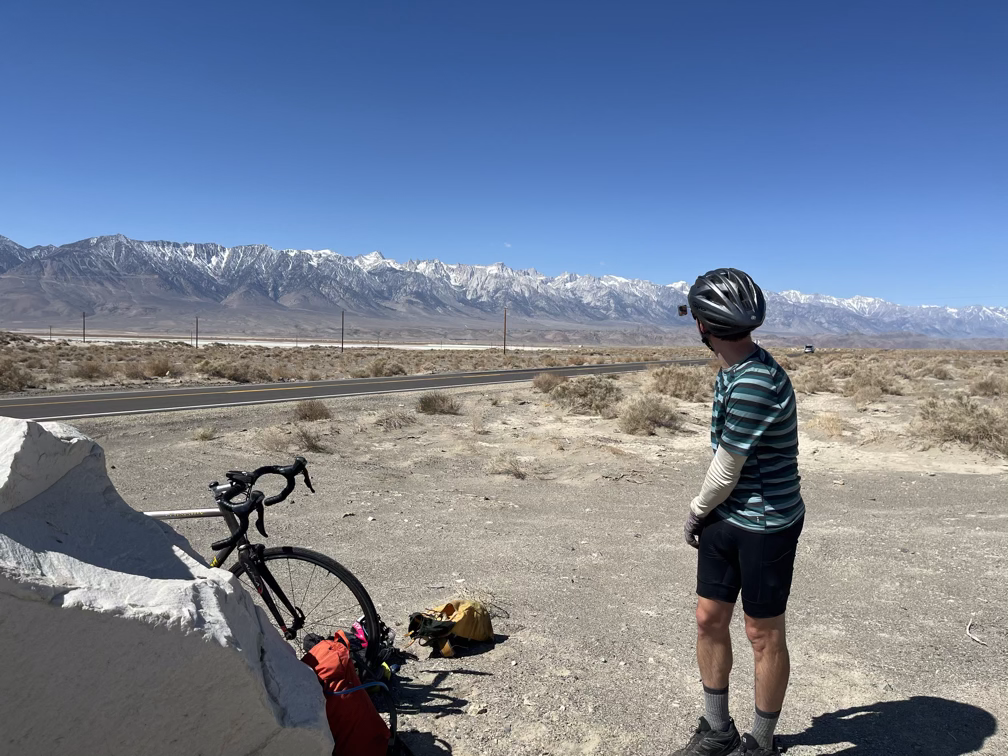 The bad news is that the light wind we experienced in the morning come up the Inyo range turned into a monster headwind by the time we dropped into the valley. The last ten miles were worse and worse, first pushing through a ten mile an hour wind and eventually struggling against a twenty to thirty mph headwind. The only word to describe it is demoralizing. It’s not like we weren’t making progress, slowly, but we had really counted on re-upping our energy levels in Lone Pine and the last ten miles probably took us an hour and a half instead of the 45 minutes we had originally planned.

The Whitney Portal road is famous to local California cyclists as a brutal hill climb with exceptional views. It clocks in at 11.4 miles and gains 4500’ at an average grade of 7.6%, but with the catch that the first four miles which are under 6% grade mean you pay for that in the hairpin turn which peaks at a whopping 11%!

We had a great recovery meal at the Alabama Hills cafe and refilled our snacks and water before starting up the climb. We killed a little bit of time at the local gear store hoping the sun would get a little lower in the sky so that things would cool off, but eventually around 3pm we gave up and got moving. 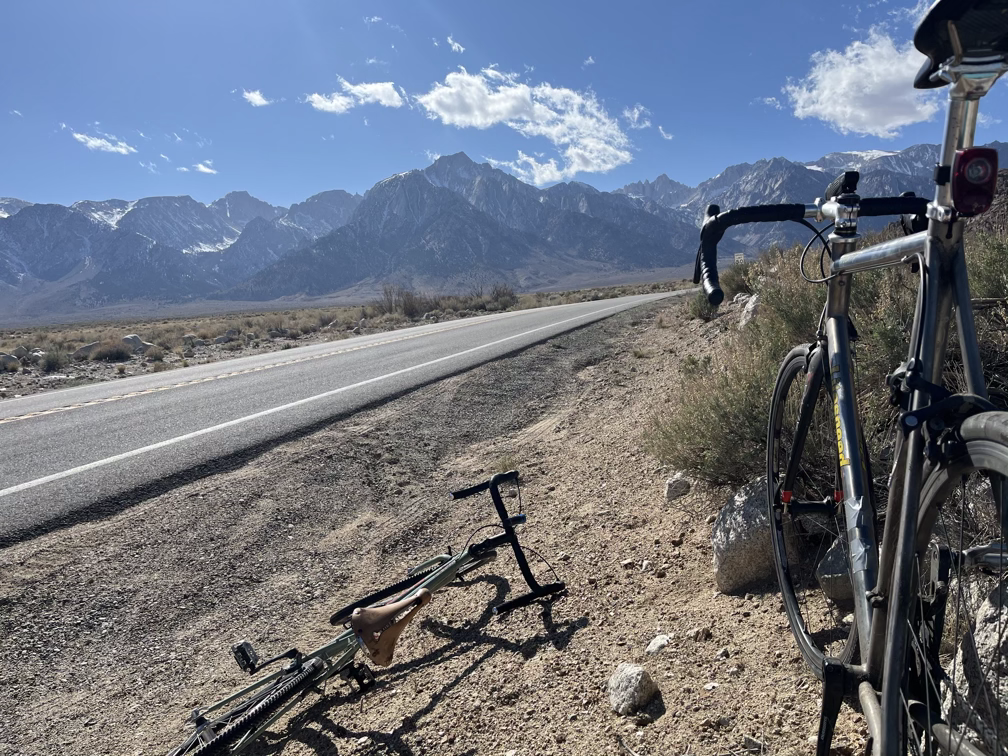 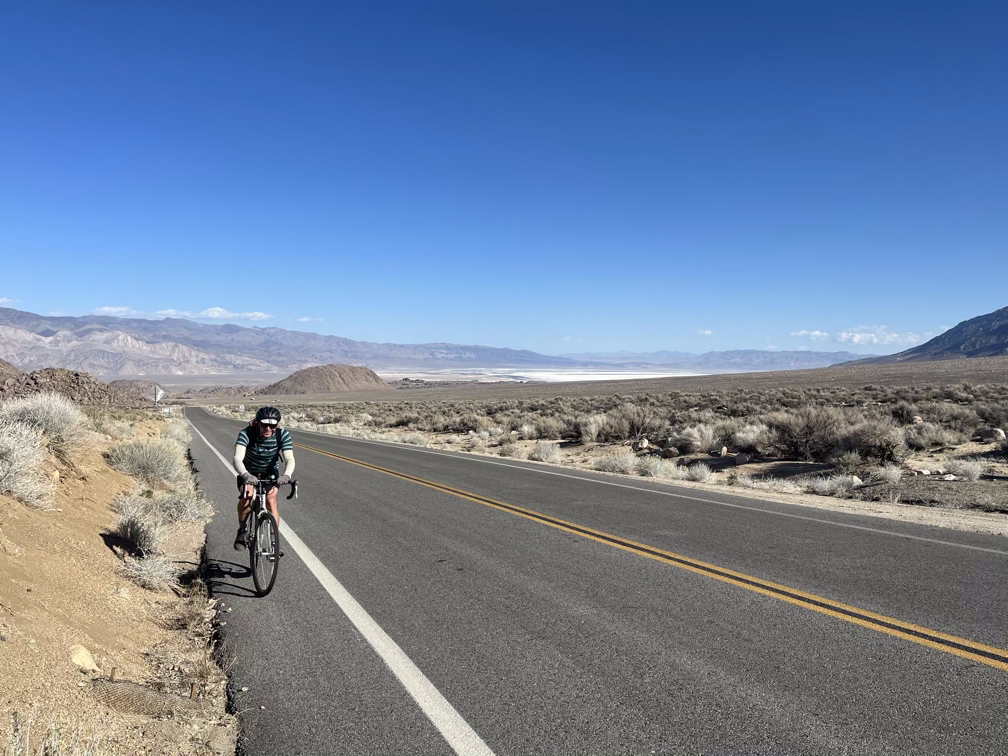 The first part of the ride was a pleasant and painful experience. We were both really starting to feel the insufficient recovery of the previous day compounded by the fairly huge amount of distance we had covered today.

The famous hairpin turn on the Whitney Portal road that keeps the grade at a “mellow” 10%: 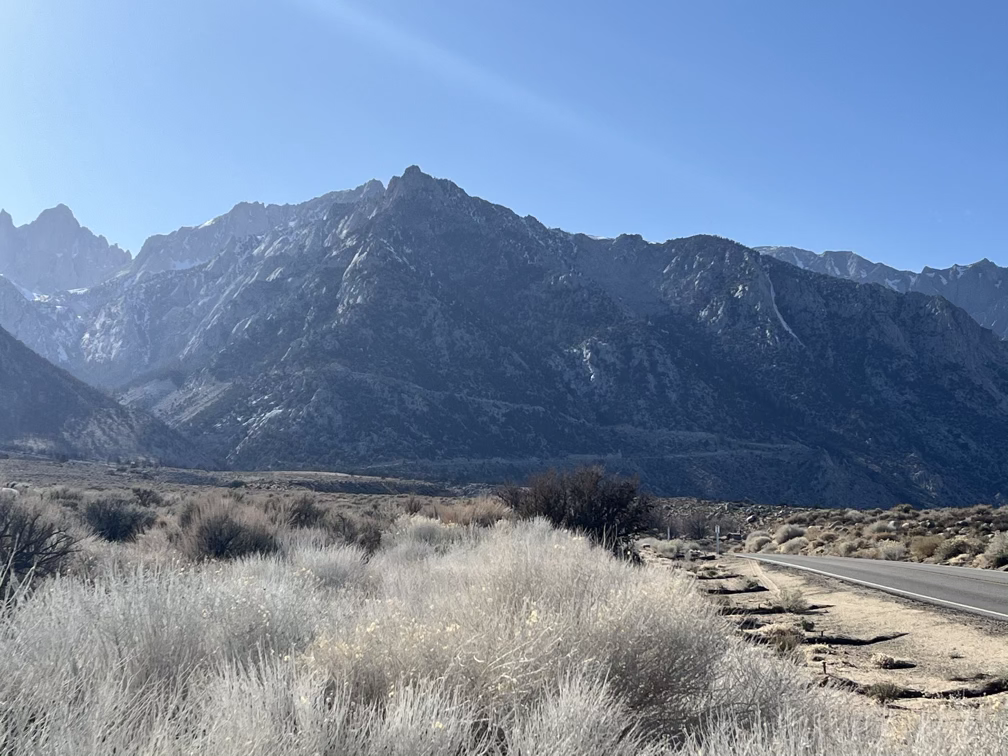 Around 4pm or so the sun dropped behind the Whitney range and put is into shadow, which made for a much more enjoyable experience. Still, I had to stop every 1000 feet of road or so to pause and catch my breath. We passed 7000’ around the start of the first hairpin and you could really tell. 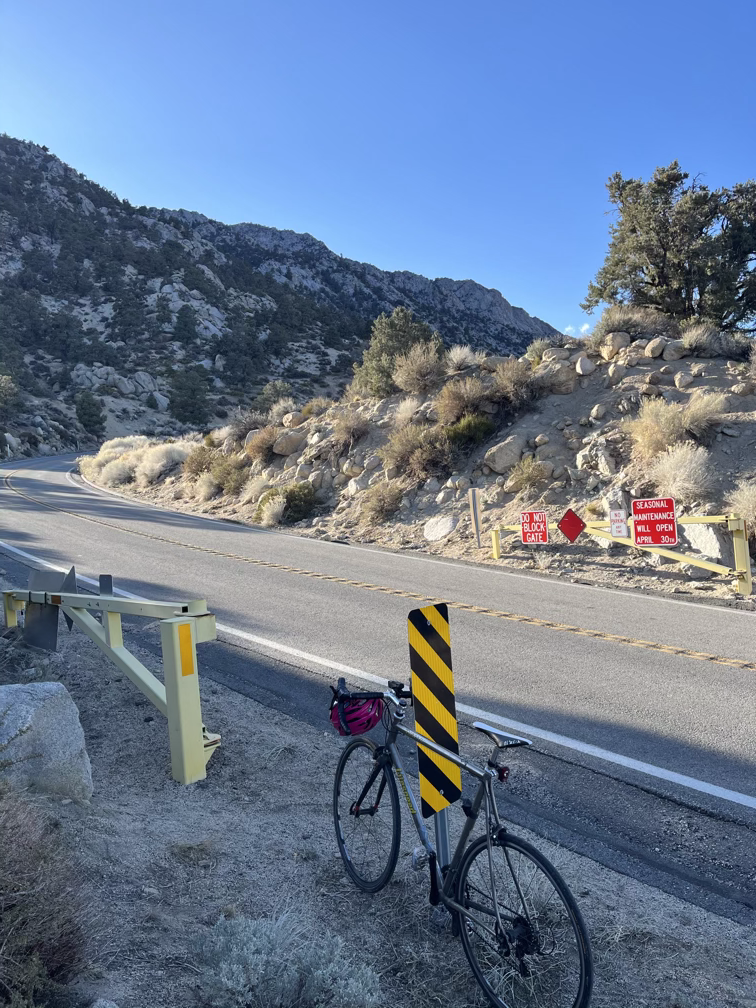 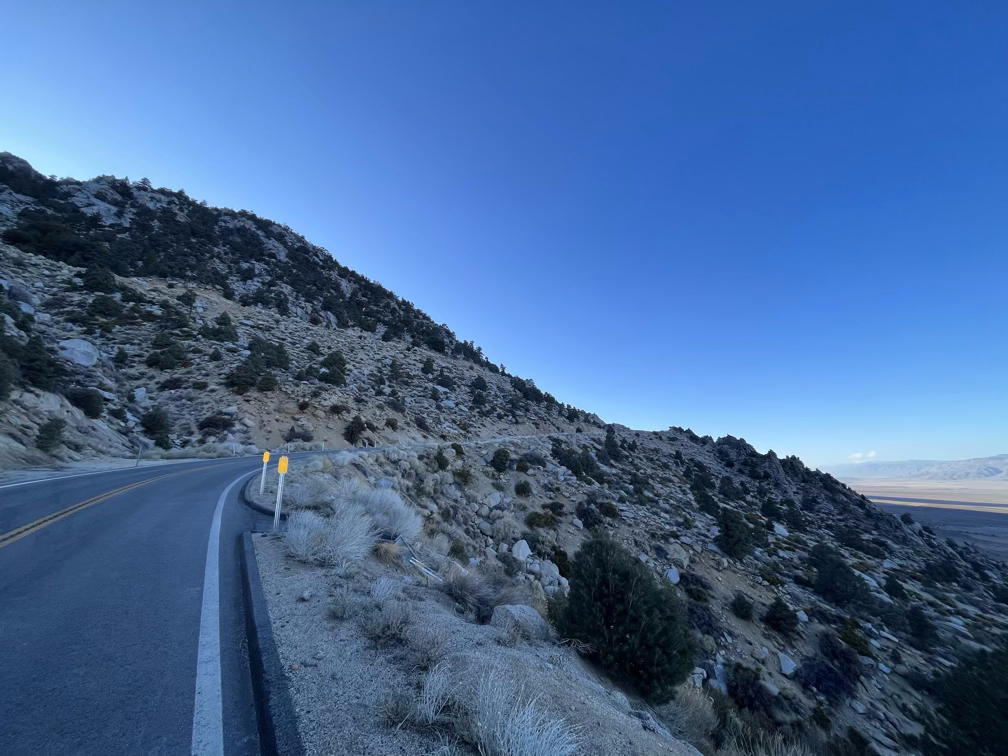 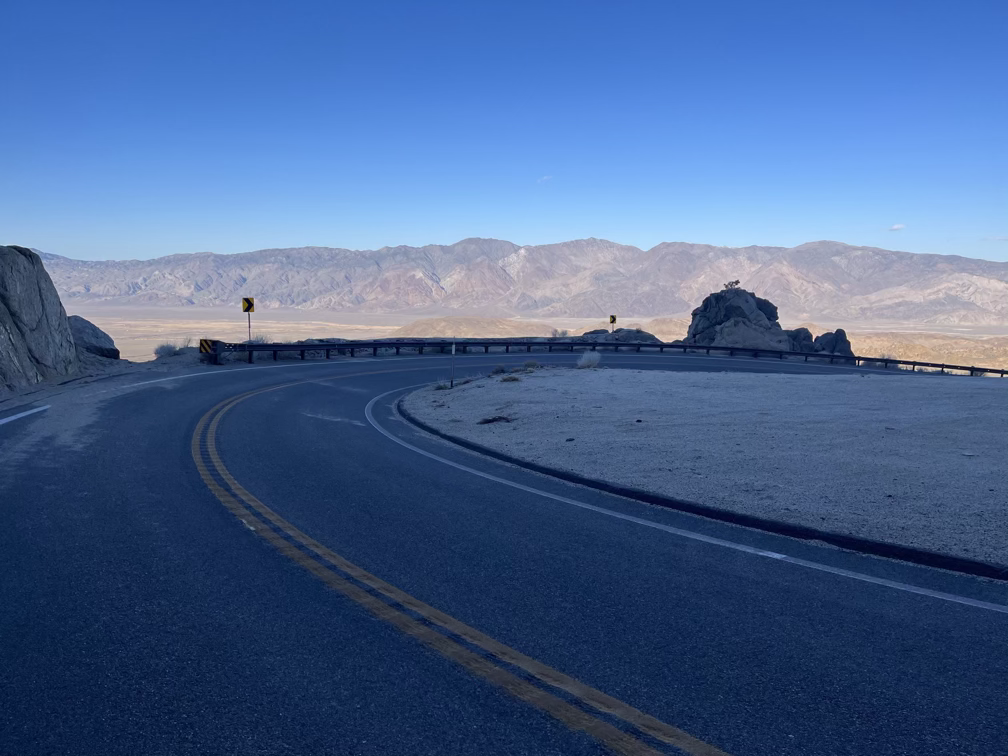 And then, all of a sudden you bike around a final turn and you’re back at the upper gate! The car was waiting with food, snacks, and dinner! For me that was the biggest ride I’ve ever done, not the longest but the total elevation gain adds up and made this ride harder than any other I can think of. One thing we had to look forward to was the ride back down the Portal road in two days after our attempt on Whitney! 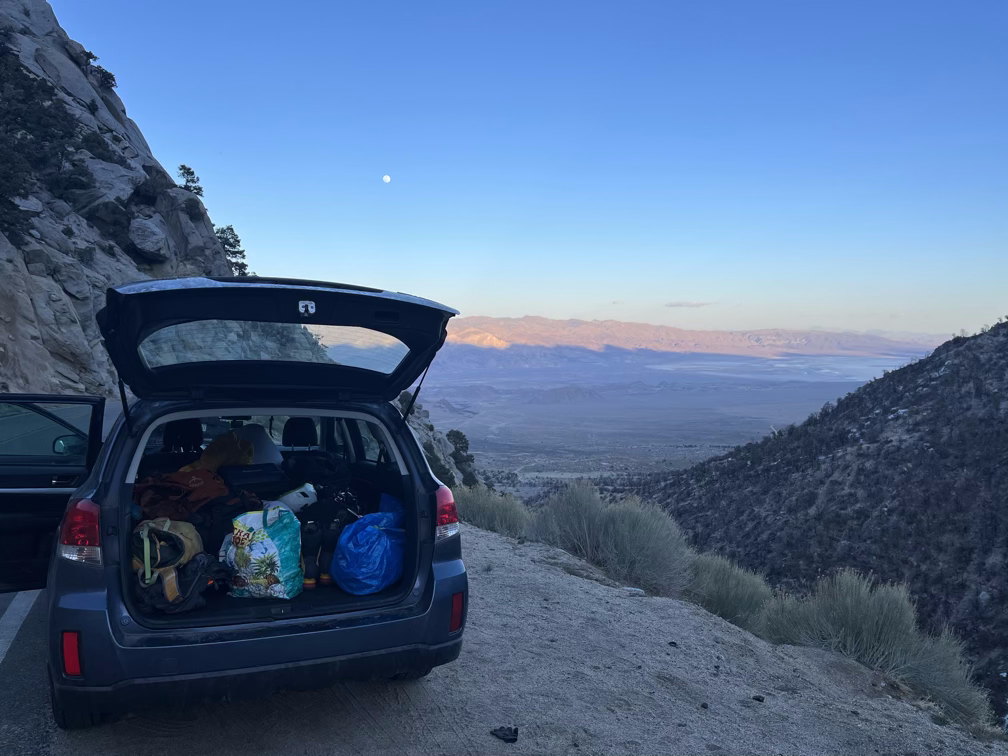 Once again we got to sleep super early to maximize our recovery, fitting an hour or so of gear re-organization to make our morning go a little more smoothly. 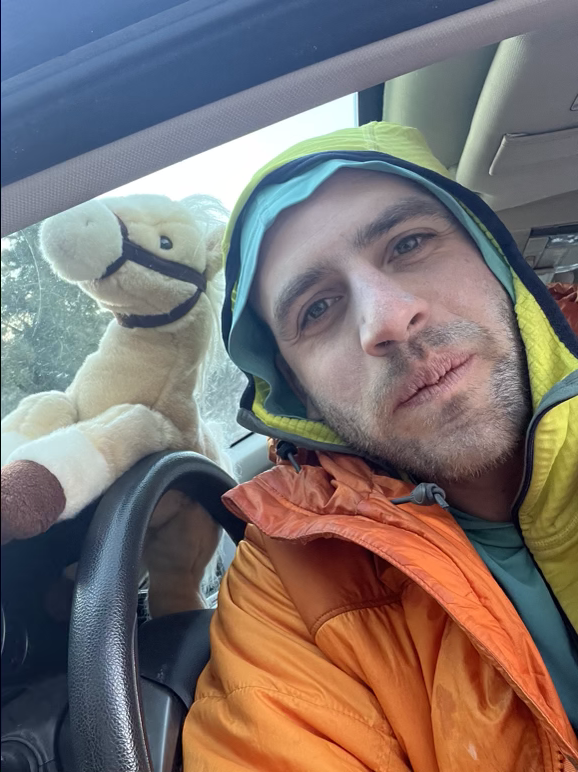