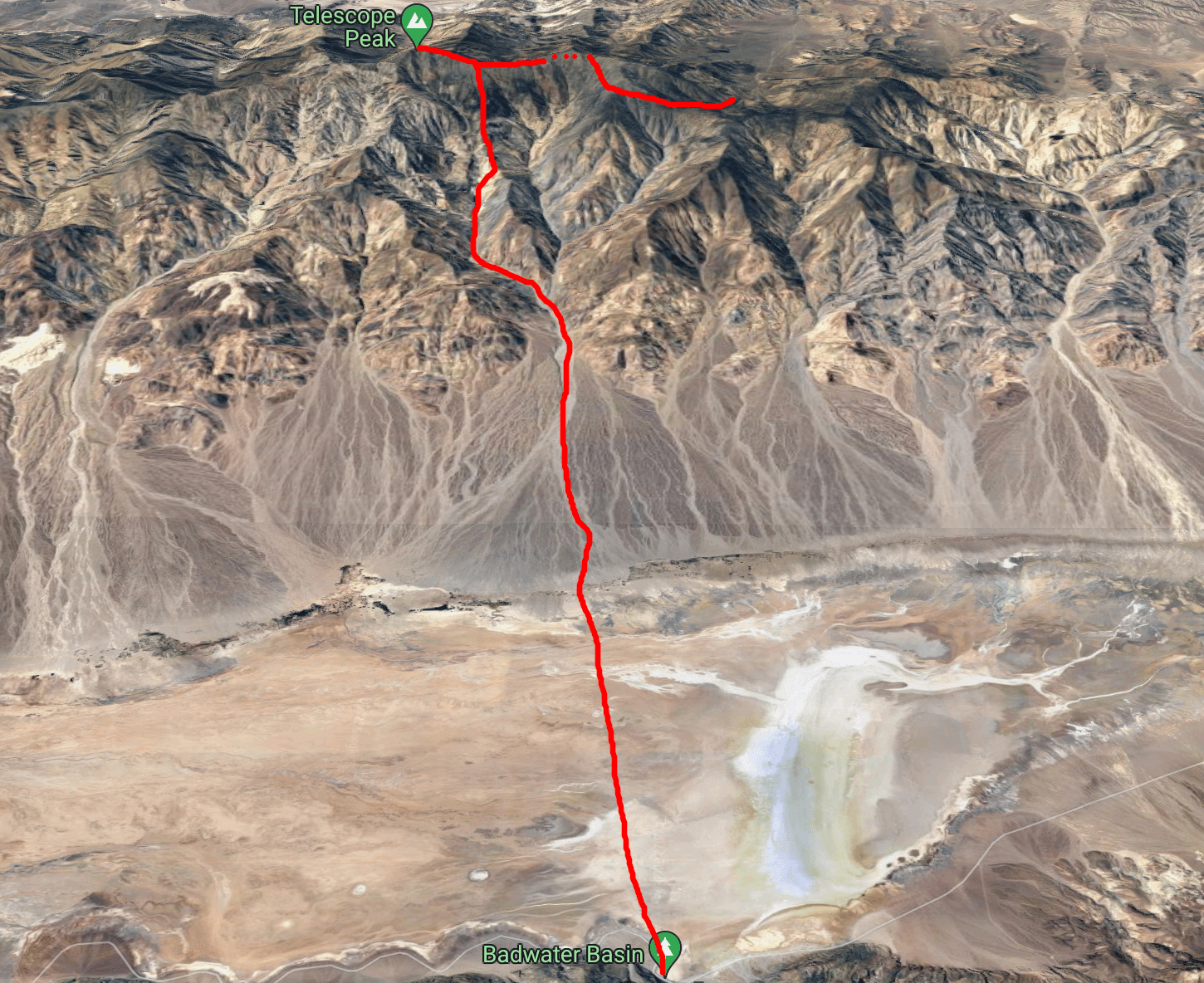 Day 1 of our trip was by far the most intimidating. About +11,300’ of elevation gain over the first 21 miles to get from Badwater Basin up to Telescope peak and then another 4,000’ of descent over 8 miles of trail that wind around Bennett and Roger peaks to get back to our cached bikes and camping gear at the Charcoal Kilns. Neither Alan or I had ever done a day as big as this – our estimate was that it would take 18 hours to complete and so to make it to the summit by 7pm we planned to start at 4am. On top of that we had to be cautious about water, because the only guaranteed running water on the entire climb would be the spring in Hanaupah canyon, 15 miles into the trek.

We woke up at 3am and drove the last hour down to Badwater Basin, eating a few snacks on the way there. One of the lucky aspects of our trip was that we had an almost full moon for the entire week and a forecast for clear skies on most days. When we got to Badwater at 4am we were treated to a rare moonset, highlighting the Panamint range and Telescope peak on the left. 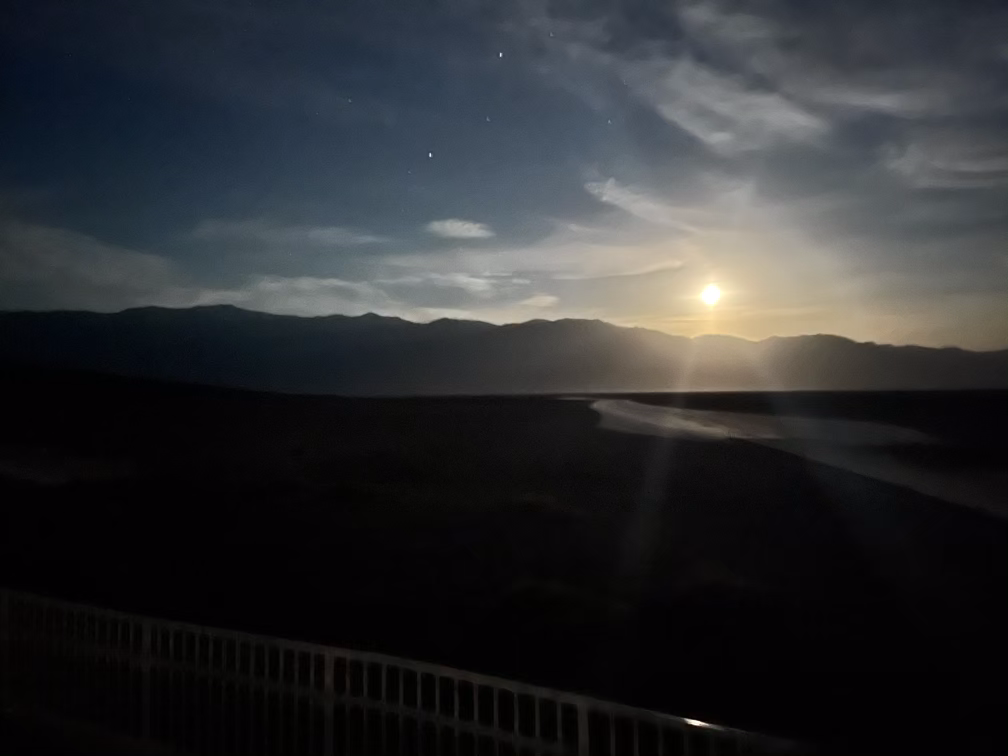 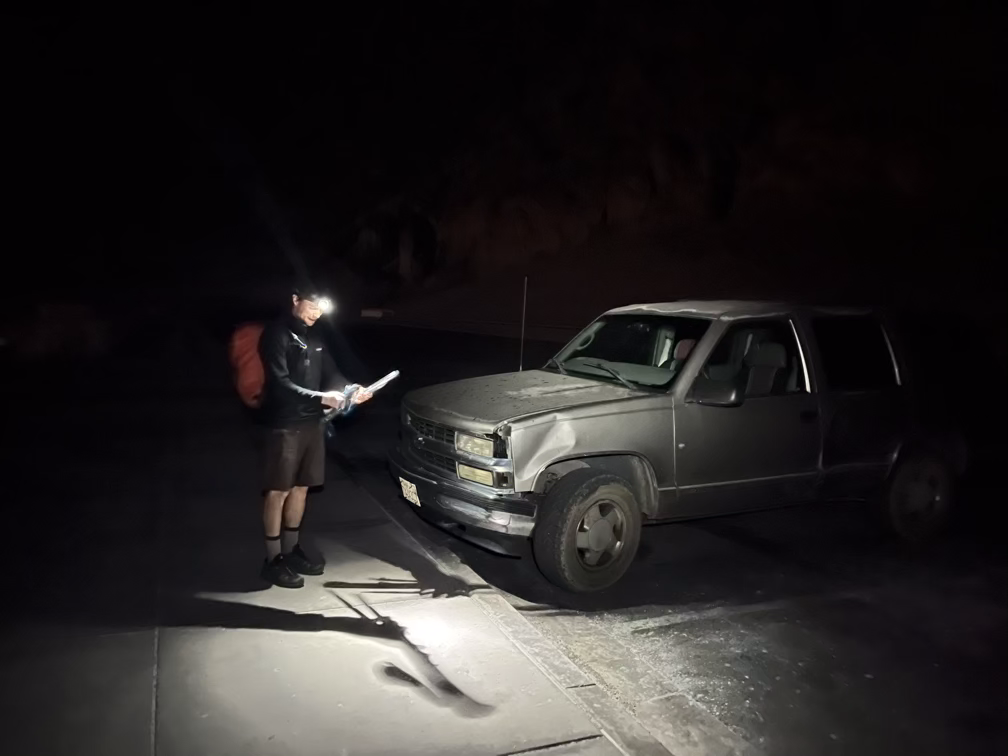 After that, we ditched the car and got moving.

Pretty much immediately we ran into our first of many surprises for the trip. Badwater Basin is a salt flat, but it is far from flat. Instead, the salt pools in small basins and crusts up to form huge walls that can get up to a foot or more tall. Fortunately the one I tripped over in the video wasn’t too big or I might have put my face into the salt and ended the trip… 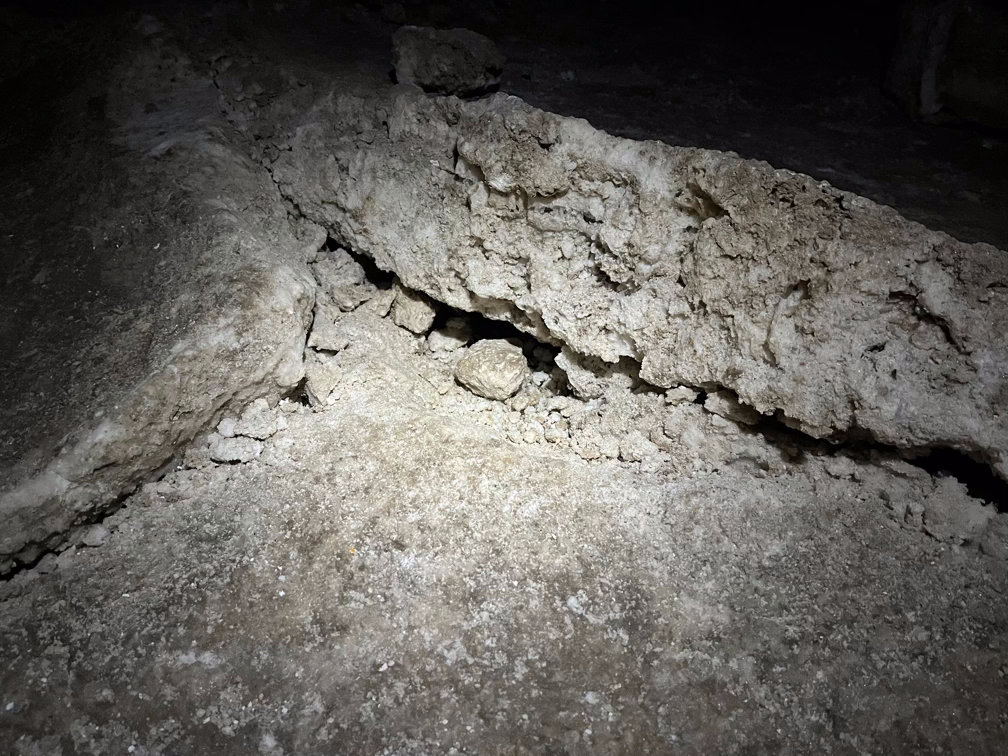 It’s hard to gauge the scale in the photos, but these salt formations are much bigger than they seem and we spent a lot of the first hour taking big steps to get over them. We expected to move at about 3 miles an hour across the flats but by the time the sun started coming up we were probably doing about two thirds of that. 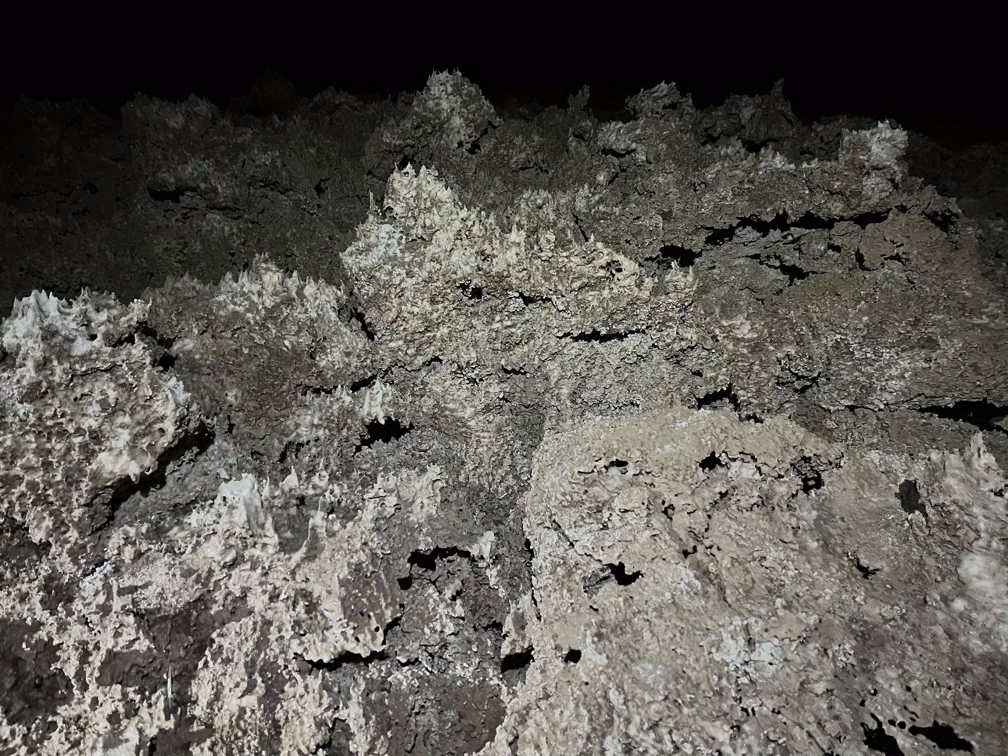 When the sun did finally come up, we got a spectactular and intimidating view of Telescope in the distance. We also immediately walked into the low point of Badwater, which most people don’t realize is actually on the west side of the basin and quite far from the road. Unfortunately the low point is where the water eventually pools and we spent a few minutes scraping off the salt/dirt muck off our feet. Death Valley in winter is actually pretty wet in some places! 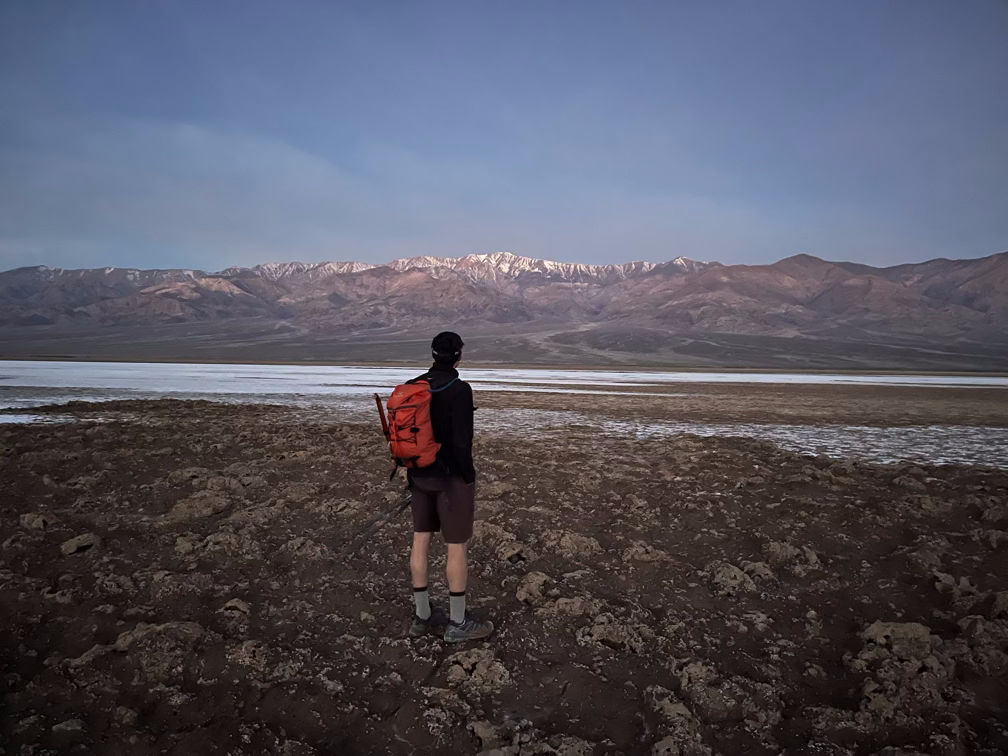 Around 7am or so we finished the crossing of Badwater and started ascending the alluvial fan created by ancient storms blasting water and rocks out of Hanaupah canyon. There is an old mining road that ascents up into the canyon and we followed that for the first few miles of our ascent. It’s a slow uphill, maybe about 2% grade on average, so it’s a casual stroll. We had plenty of opportunties for rest breaks and a lot of time to talk and think as we made our way up. 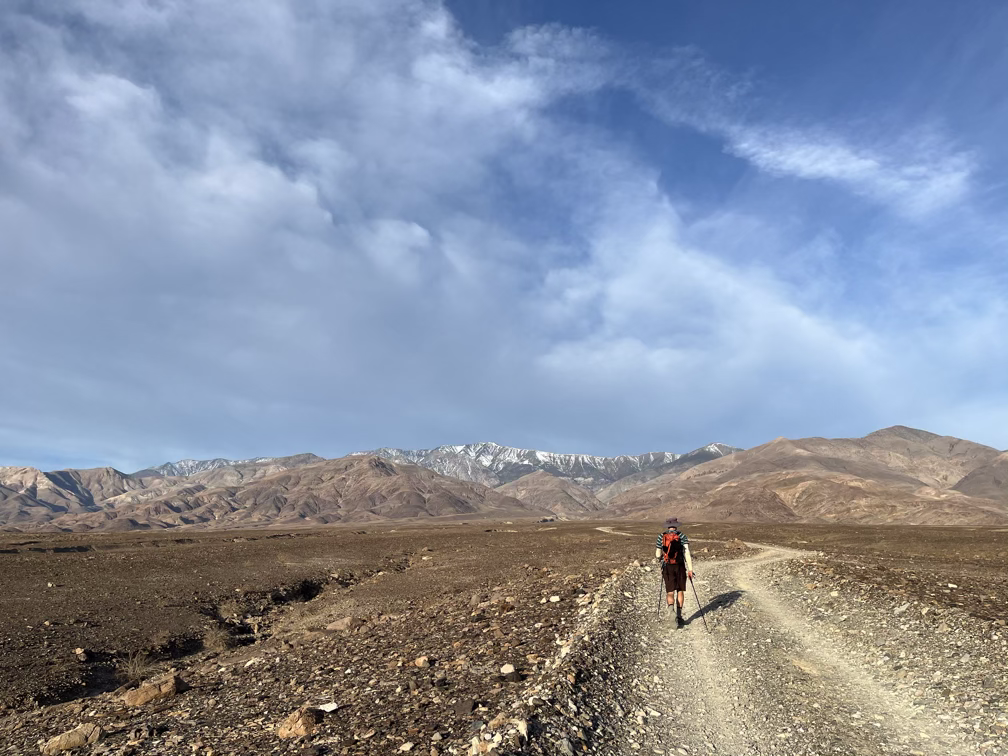 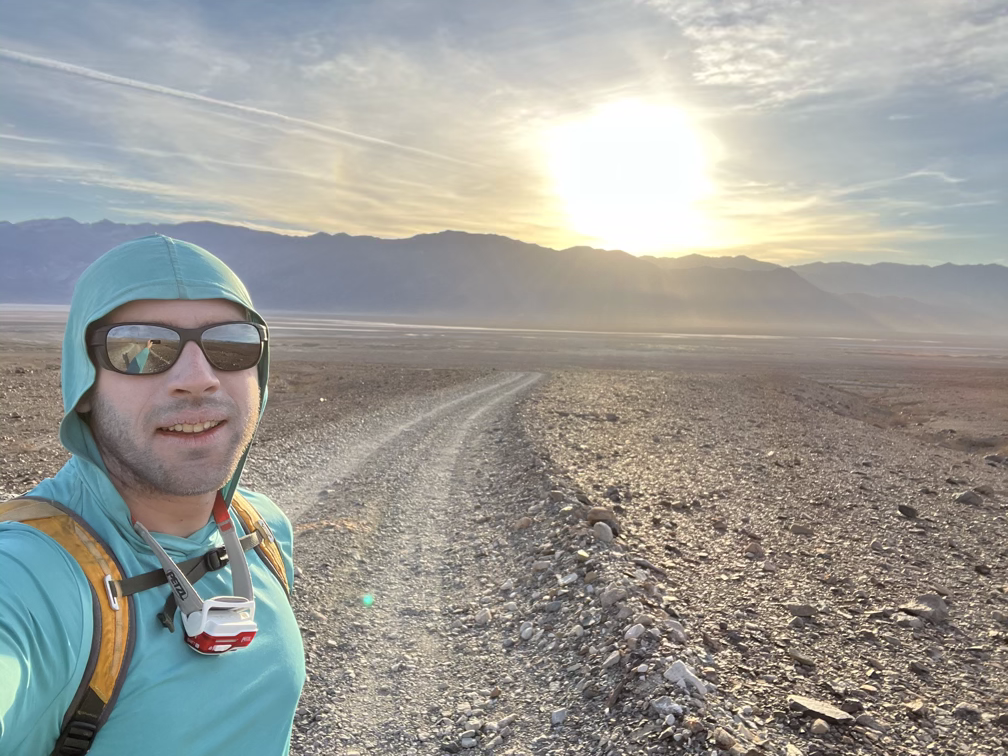 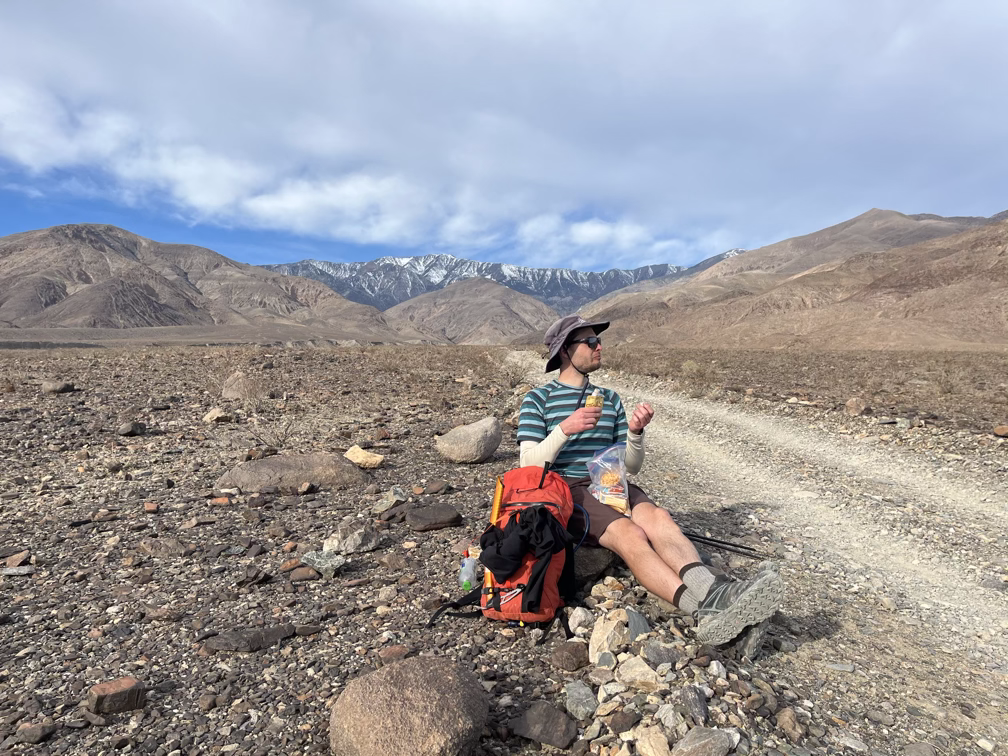 We were making good time at this point and almost exactly on our target schedule, hoping to arrive at Hanaupah spring right around noon to refill our water bottles. Overall: spirits were high and we were both feeling good! A bit of cloud cover kept the sun off of us until around 11am and even after that we were able to keep the shady areas in the canyon and avoid the worst of the sun. 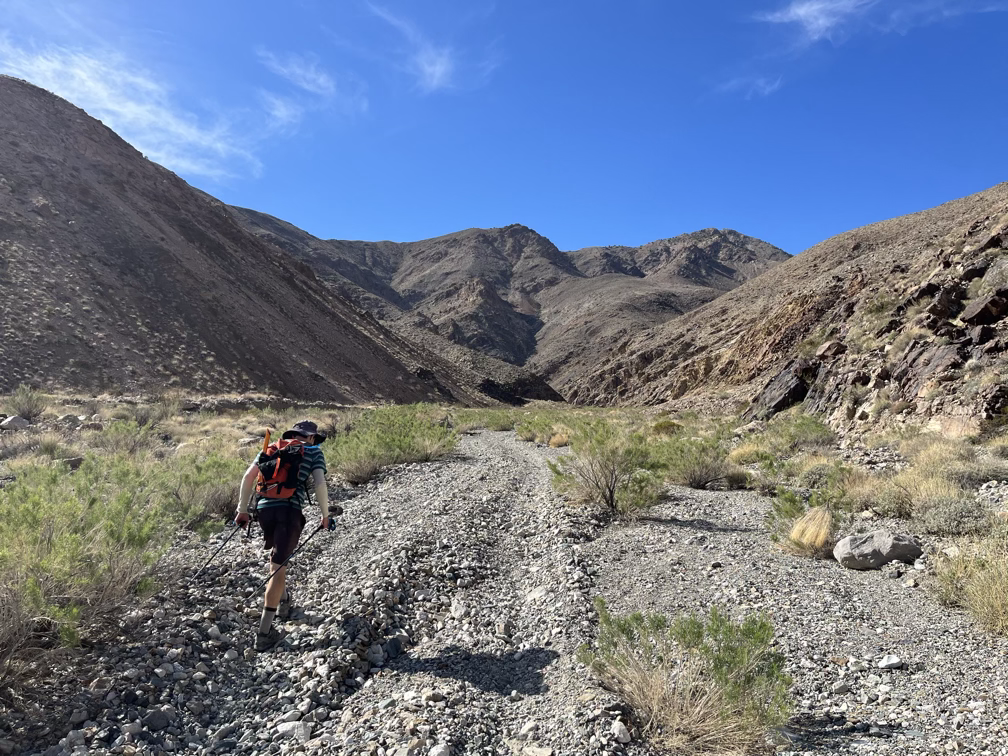 Pretty soon we found ourselves surrounded by unexpectedly bright greens – signs of a spring ahead. 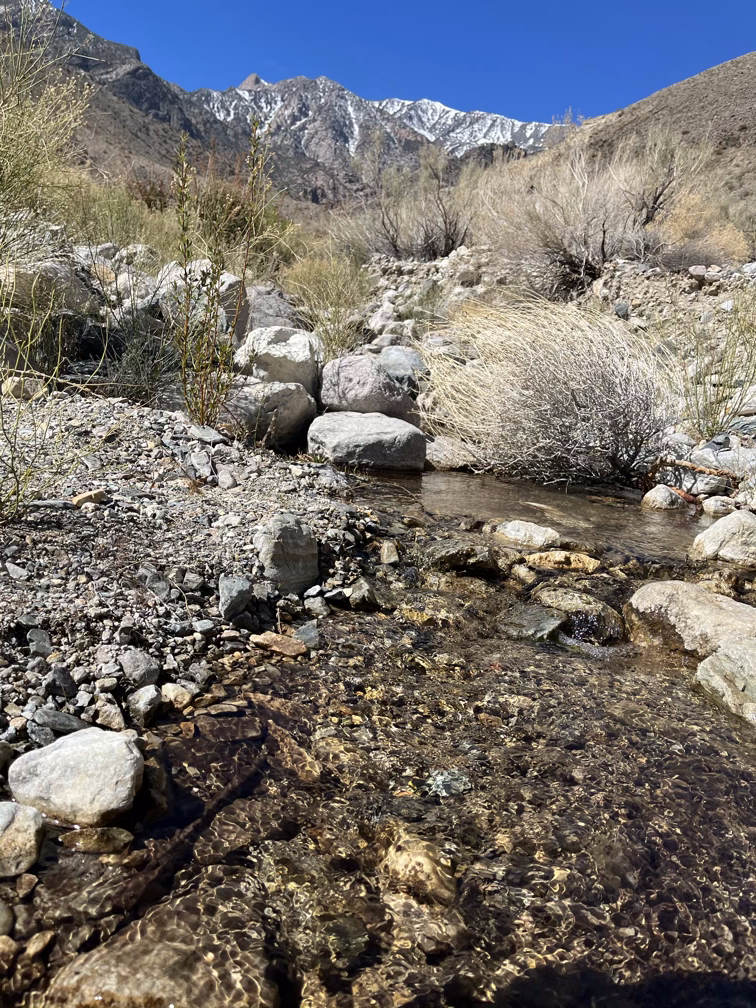 It took us about a half hour to squeeze the stream water through our filters to get another 3-4 liters each, enough to get us to the summit of Telescope. By this point the weather had taken a slight turn for the worse with the sun beating down on us pretty hard and temperatures rising into the high 60s, possibly 70s. We didn’t have much choice at this point about the route, we had to take a chossy steep slope up to one of the bigger ridges that comes down off of telescope peak. Fortunately, a cool breeze was coming through on our ascent up to the 5000’ keeping us comfortable. 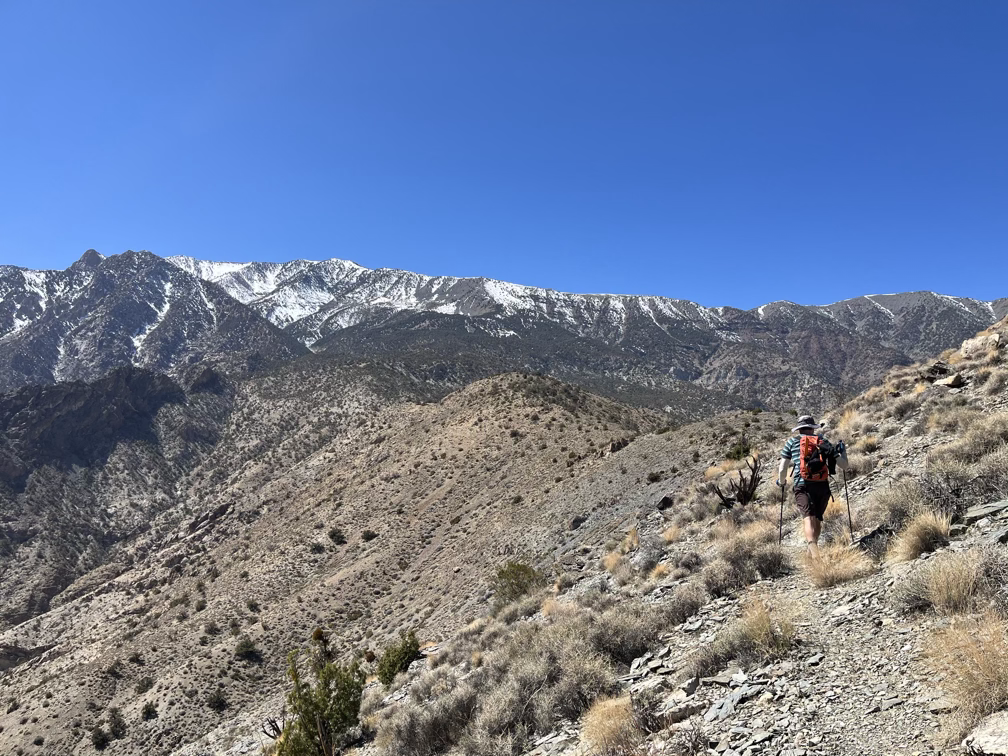 The wind died down once we reached the ridgeline and we started having to take more breaks in the shade to avoid overheating. Part of what made this day so good for us was that we moved through so many different ecosystems on our way up Telescope peak. Badwater basin has very little evidence of life: the high salt content kills all of the plants that try to grow in the basin itself. As soon as you rise a few feet out of the basin though and the salt is no longer at a high concentration you immediately find a variety of plants, evidence of small rodents, and you start hearing birds chirping in the distance. The higher you climb the more vibrant the surroundings become, until you get too high up and the cold starts to kill off life. It’s a vivid example of the small range of temperatures in which our kind of life thrives.

On one of our breaks we got a beautiful view back down into the Badwater basin, 16 or so miles back and more than a vertical mile below us. 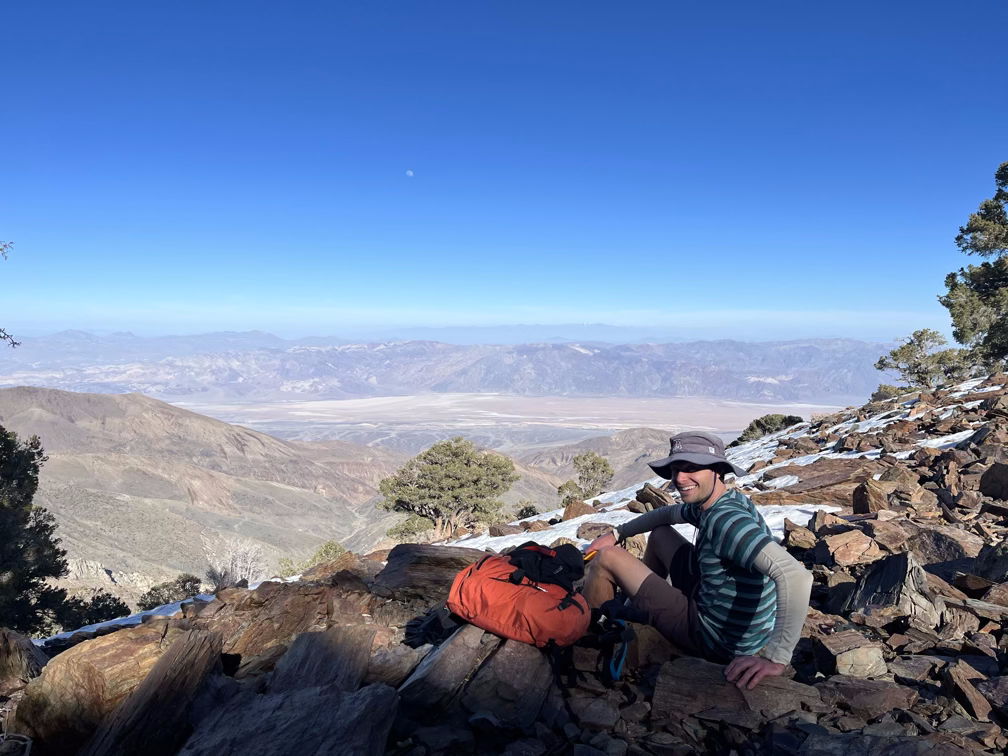 Around this time I had a brush with heat exhaustion. I stopped talking for a bit and then shortly after that stopped sweating, despite the pretty intense sunshine. Fortunately, I caught the symptoms early on and we slowed our pace down and took more frequent breaks – I also switched to eating more salty foods instead of sweets. I had planned to mostly survive on a diet of brownies, using diluted gatorade to maintain my salt balance, but for my body apparently this is still not enough salt to maintain the level of sweating that I need to stay cool. Lesson learned!

In this format it might be a bit hard to appreciate how much time has passed, but we spent hours and hours walking. By this time we had been moving for almost 12 hours straight with only short breaks to eat food and drink water. Each of these videos was taken almost an hour apart!

Overheating quickly became a moot point though as the sun started dropping behind Telescope putting us back in the shade and the cold.

The vegetation in the alpine zone also changed dramatically and we were lucky to find ourselves next to some Bristlecone pines!

In the videos as this point we seem pretty confident, but we were also facing a pretty concerning issue, which was that the snow conditions were different than what we had planned for. Alan brought microspikes and an ice axe in case we found ice on the summit ridge, but I had opted to keep my pack lighter and hope that enough other people had gone to the summit that there would be a good “boot pack”, tracks in the snow left behind by other people which you can walk up without any extra equipment. 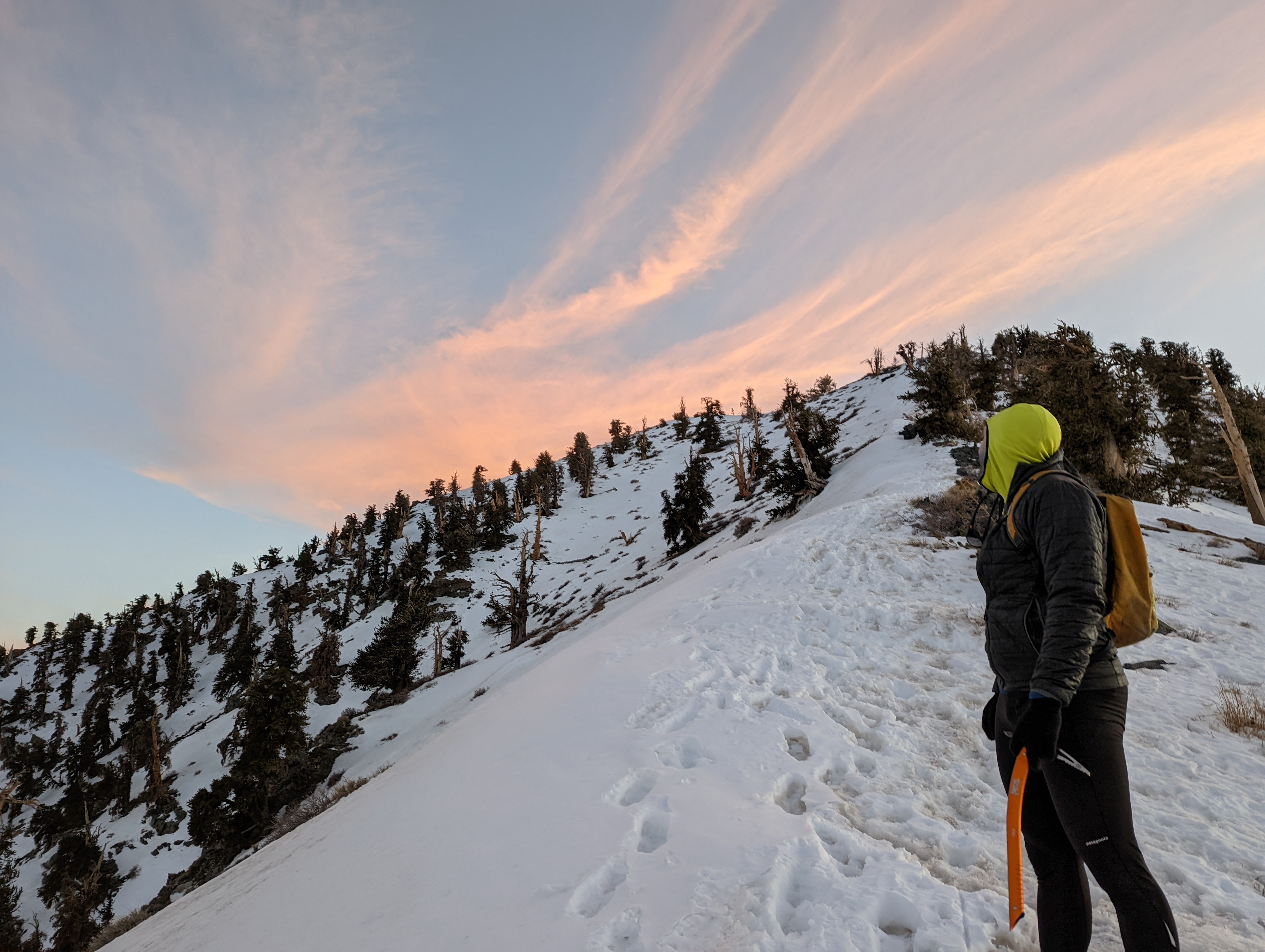 Conditions ended up being icy, but not so much that we needed the extra equipment. Alan felt more comfortable with two poles than with an ice axe, so I took the axe in case I slipped so that I would be able to self arrest and stop myself. 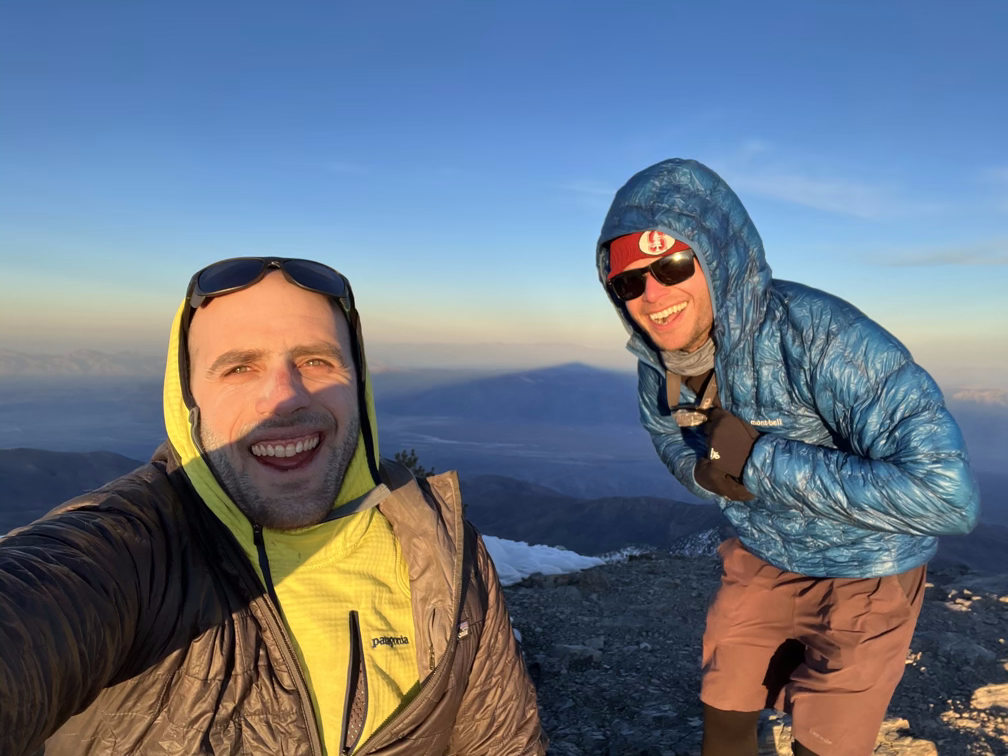 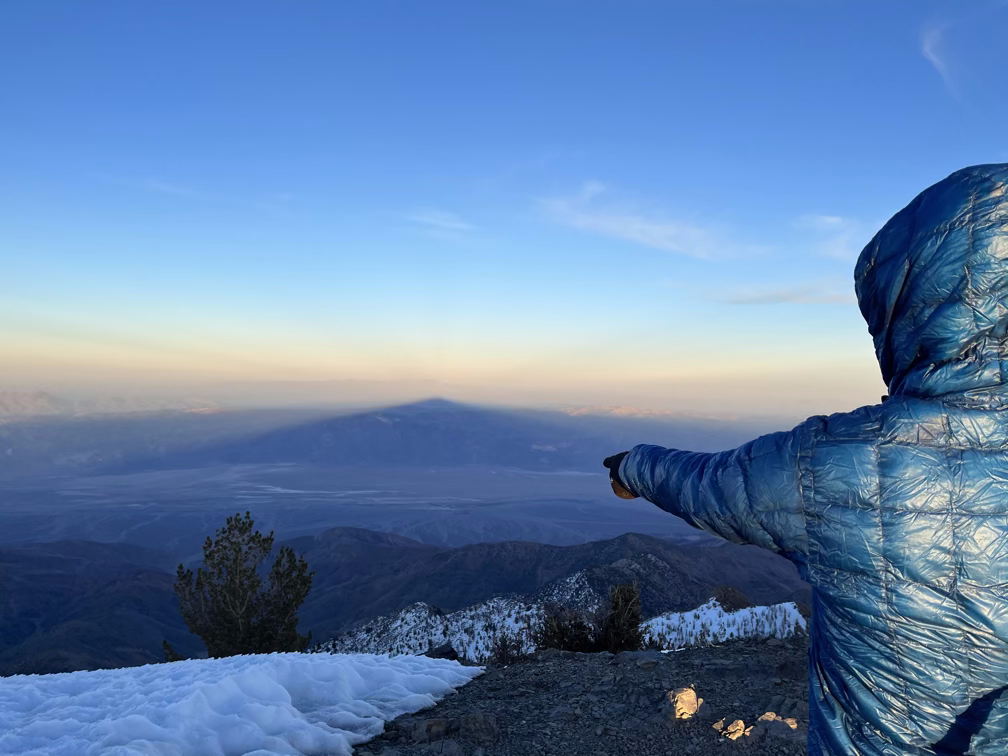 We didn’t linger for long, worried about the softened snow freezing again as the sun set. We reversed the top section of steep snow very quickly and then started hurrying down the trail, occasionally crossing big tongues of snow covering the trail which we had to navigate carefully, often by putting the microspikes back on and getting the ice axe back out for safety. 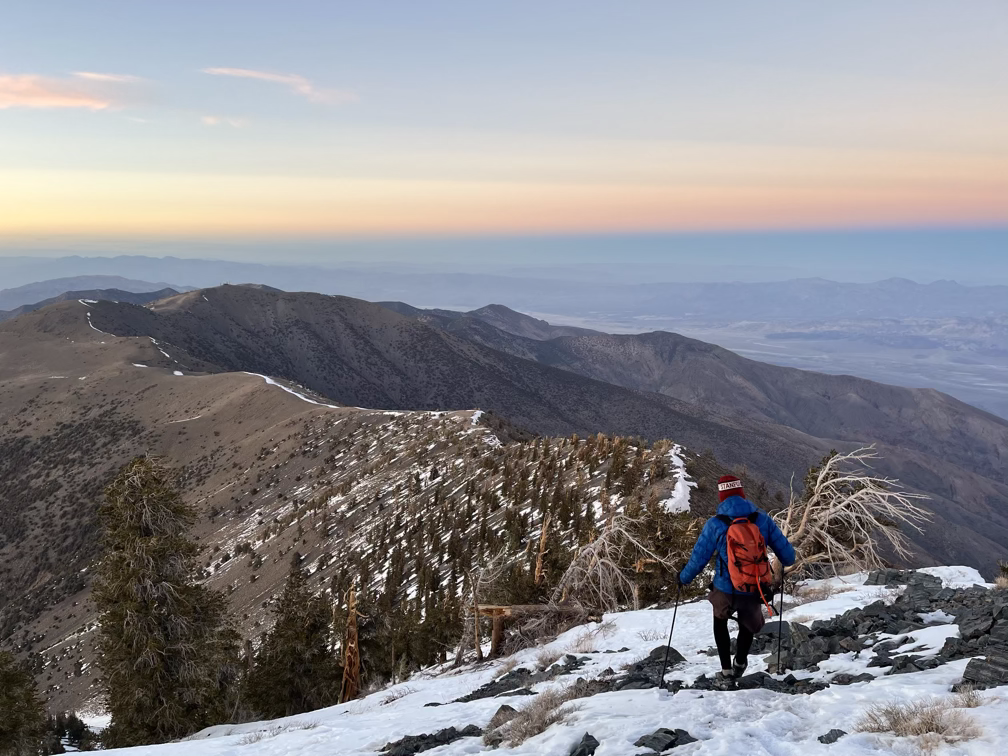 Day 1, which was the scariest and most uncertain part of the low to high adventure was over. We successfully summitted Telescope and got a good look at Whitney over a hundred miles away. Time to switch gears and start biking west! 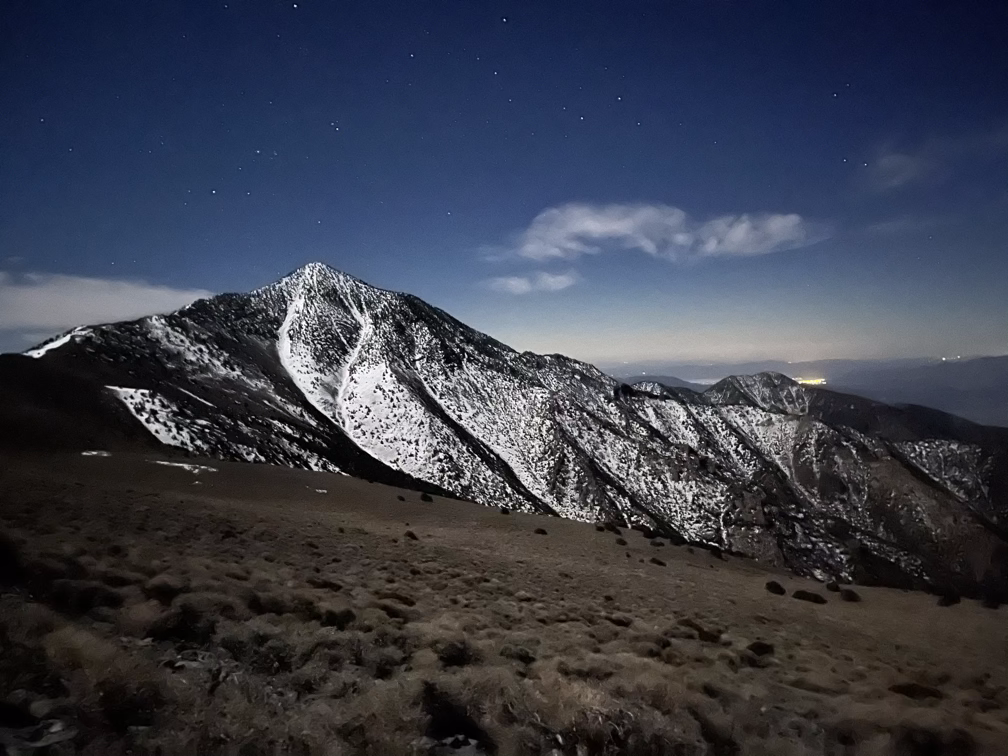